Two Bhutanese pastors charged with improper fundraising have been released from prison after serving reduced sentences and paying fines.

Tandin Wangyal was released in January 2015 after paying a fine equivalent to about US $1,500. He had been sentenced to nearly four years in prison.

Mon Thapa was released in September 2014 after paying a fine equivalent to US $1,630. He had originally been sentenced to 28 months. 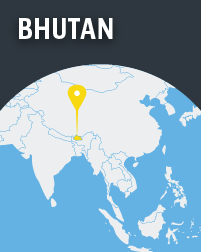 The men were arrested In March 2014 while they were carrying a sick child to a clinic in a village. They had arrived the previous day after an invitation to hold a three-day seminar for 30 Christians who came from neighboring towns.

They were detained under the charges of conducting a gathering for religious purpose without prior approval; showing a film without certificate of approval from media authorities; for attempting to forcibly convert those at the seminar to Christianity; and for collecting “illegal funds.”

Additional charges against Wangyal were filed when prosecutors presented an computer hard drive that they claimed contained data indicating Wangyal had received funds from the public without official permission.

“They had not obtained permission from local authorities,” Dorji was quoted as saying. “This is a crime under the penal code… If you have violated this, it does not matter whether you are Buddhist, Hindu or Christian.”

Police said they found, after questioning the 30 Christians who took part in the three-day meeting, no evidence that the pastors had tried to force believers to convert to Christianity.

The pastors were convicted of the remaining charges and sentenced in September 2014.

Bhutan, a Buddhist-majority nation of 733,000 people, transitioned to a constitutional democratic monarchy in 2008, after a century of absolute monarchy. Bhutan’s constitution guarantees “freedom of thought, conscience and religion,” and adds “no person shall be compelled to belong to another faith by means of coercion or inducement.”

According to the CIA World Factbook, the country’s population is roughly 75 per cent Buddhist, 22 per cent Hindu. The remainder includes thousands of Christians.

Bhutan is No. 31 in Open Doors’ World Watch List, an annual ranking of countries where life as a Christianity is most difficult. They endure threats and pressures from village heads and clerics to return to Buddhism. They can pray and worship privately in their homes, but they struggle to meet in congregations and to obtain official permission to do so.