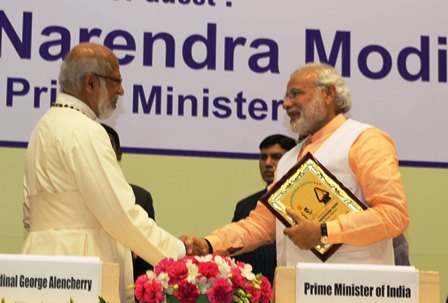 Critics of Indian Prime Minister Narendra Modi were ‘pleasantly surprised’ by his unequivocal assertion of the right to freedom of religion while addressing a major church event in New Delhi on February 17, ending his silence on a recent spate of anti-Christian violence and propaganda.

However, while hailing Modi’s stand, the mood among Christians, secular activists and media remains unanimously to urge Modi to ‘walk the talk’. Modi’s federal government is led by his Bharatiya Janata Party (BJP), known for espousing a Hindu nationalist agenda.

“My government will ensure that there is complete freedom of faith and that everyone has the undeniable right to retain or adopt the religion of his or her choice without coercion or undue influence,” asserted Modi, addressing a predominantly Catholic gathering.

Modi was the chief guest at celebrations organised by the Syro Malabar Church (SMC), based in the southern state of Kerala, to mark twin canonizations of its saints Elias Kuriakose Chavara and Sister Euphrasia, canonized on November 23, 2014 at the Vatican.

The Syro-Malabar Church [Syro from Syrian, Malabar from a region in south India] is the oldest expression of Christianity in India and traces its heritage back to the tradition of St Thomas the Apostle who it believes reached the Kerala coast in 52AD. It believes he was martyred in India.

Addressing the Catholic gathering of over 1,000, including a dozen bishops and hundreds of priests and nuns, at Vigyan Bhavan – India’s premier convention centre in New Delhi – Modi reiterated: “We cannot accept violence against any religion on any pretext and I strongly condemn such violence. My government will act strongly in this regard.”

“My government will not allow any religious group, belonging to the majority or the minority, to incite hatred against others, overtly or covertly. Mine will be a government that gives equal respect to all religions” continued Modi, who was hosted by Major Archbishop Cardinal George Alencherry, head of the vibrant SMC.

The belated assurance to Christians and other minorities came after a series of incidents of anti-Christian violence and vicious propaganda by Hindu nationalist outfits since Modi assumed office in May 2014, following BJP’s landslide victory. Five Catholic churches had been torched and vandalized in New Delhi alone since December.

Modi’s declaration followed closely on from his BJP’s poor performance in the recent election to the Assembly of Delhi State. The BJP had won all the seven Delhi State seats in the national Parliament in May 2014, but could win only three of 70 seats to the Delhi Assembly in the Feb. 7 poll.

Modi’s statement on religious freedom – telecast across the nation by three dozen news channels – cheered many, while he drew several rounds of loud applause from the audience that listened to him with rapt attention.

P J Kurian, a deputy speaker of the upper house of Indian Parliament and a member of the (non-Catholic) Mar Thoma (St Thomas) church from Kerala, said the recent incidents were an ‘aberration’.

Kurian recalled “From the time St Thomas the Apostle sowed the seeds of Christianity in Kerala, it was Hindu kings who protected Christians, and even gave them land to build churches.”

Arun Jaitley, finance minister in Modi’s Cabinet, went a step further and told the gathering that what had happened in Delhi was “an unacceptable aberration in a society as liberal as India…those mischief-makers would have no space in India.”

Opposition parties promptly reminded Modi that it was ‘not enough’ to make declarations but ‘time to act’ against the fringe elements in the Hindu nationalist groups who have been carrying out violence, threats and propaganda against the religious minorities.

Commending Modi for ‘Breaking Silence’ in its Feb 18 editorial, the Times of India wrote “Modi has done well to uphold religious freedom and the right to choose.”

However, the editorial reminded Modi that “he must openly counter BJP’s ostensible well-wishers…Only by walking the talk on inclusive development and sidelining the extremist fringe can the government repay the faith the people have reposed in it.”

This caution came in the wake of the Vishwa Hindu Parishad [World Hindu Council, VHP for short] promptly describing Modi’s sermon on tolerance as ‘aimed at Christians only’.

The vociferous VHP has been conducting ‘Ghar Whapsi’ [meaning ‘home coming’] or re-conversion of Christians in several places and threatening to re-convert all the ‘150 million’ who, it says, have forsaken Hinduism since Indian independence in 1947.

“We hope now that he will enforce the solemn promise he has made to our community,” pointed out archbishop Couto, who felt he had been forced to lead street protests after the repeated attacks on Catholic churches and institutions. “If he fails to do that, we can now always remind him what he has assured us.”

“We would be ungrateful if we do not thank the Prime Minister for speaking up at last against hate crimes…We had been urging him to do (so) for the past six months, especially as we requested him when a delegation met him at his residence on Christmas Eve.

“Freedom of faith, as enunciated in the Hague documents [quoted by Prime Minister Modi in his address, from an interfaith conference held in 2008], is quite a part of the Indian Constitution. There has been much tragedy and human suffering because the constitutional guarantees have not been fully practiced. And because political groups have enjoyed immunity and government patronage and protection,” pointed out Dayal.

“We are happy that he did not call for a ‘ten-year moratorium’ [i.e. suspension of communal or religious violence… Modi had declared such a moratorium in his first Independence Day address on Aug. 15, 2014].”

Dayal continued: “The future will tell if groups professing religious nationalism have heard him…And if state governments and their police forces will act against hate crimes and hatemongers.”

Meanwhile Pramod Singh, President of the Christian Legal Association of India urged: “The statement made by the PM should be welcomed and acknowledged by us wholeheartedly. We should be thankful to God for whatever or whoever has prompted making of this statement. …In the fitness of things we should mark the words and remind the concerned of these words if, God forbid, such a situation arises in future.”