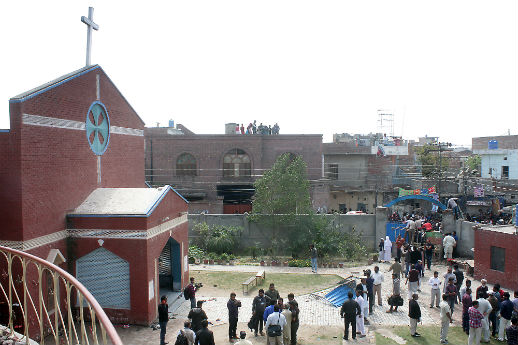 At St. John’s Catholic Church, the bomber was kept outside of the courtyard by a security volunteer who dragged the attacker off the wall.World Watch Monitor

At least 17 people were killed, and 80 others injured, as two churches in the main Christian district of Lahore, Pakistan, were attacked March 15. An Islamist group, Jamaat-ul-Ahrar, linked to the Pakistan Taliban, claimed responsibility.

At least two of the young attackers blew themselves up – one at each church – when volunteer security guards, working with local police, confronted them at the entrances to the churches.

The attacks were timed to cause maximum damage; more than 2,000 worshippers were present in the two churches for Sunday services. But prompt action by the Christian volunteers prevented the attackers from entering the buildings.

It was 11 a.m. and several shops in front of Christ Church were open when one of the suicide bombers blew himself up.

Elias Masih, the manager of one of the shops, died in the attack; his brother, Maqbool Bhatti, told World Watch Monitor they had been watching a cricket match when they heard gunshots.

“I rushed to see [what was happening] and saw a young boy approaching the church entrance, while aiming at everyone in front of him with an automatic machine gun,” Bhatti said. “He shot the policeman standing outside the church, killing him instantly.”

Asher Wasim, a member of Christ Church who reached the scene within a few minutes, said the shooter acted as a battering ram, “clearing the way for the bomber [as he approached] the entrance from the opposite side.”

One volunteer security guard, Yousuf Goga, died next to the policeman, while another, Shamim Bhatti, was at the time of this report in a critical condition in hospital.

Riaz Anjum, a resident of Yahounabad whose brother runs a medical store in front of Christ Church, told World Watch Monitor that another volunteer, 32-year-old Obaid Sardar Khokhar, overpowered the suicide bomber and dragged him away from the entrance. The bomber blew himself up instantly, killing Alias Masih, Khokhar and his pregnant wife Ambreen. The couple’s bodies were taken to their home village, Stuntzabad, where they were buried March 16.

Talking to World Watch Monitor, Ambreen Khokhar’s father, Mukhtar Joseph, said he had been on his way to meet his daughter when the incident took place.

He said that his daughter was leaving the church with her three-year-old daughter, Angelina, when the attack took place.

“Obaid rushed to the scene and overpowered the suicide bomber but [the bomber’s] accomplice shot Obaid in the head. [Angelina] ran after her father, so Ambreen hurried to save her. The terrorist firing also shot and killed Ambreen. She died saving her daughter.”

The impact of the attack outside the St. John’s Catholic Church was lessened by a security volunteer, 16-year-old Akash Bashir. Akash’s father, Bashir Emmanuel, told World Watch Monitor that Akash’s family often tried to stop him from joining church security volunteers, but that he wanted to offer his life for the security of his community.

“One man approached the church from one side while firing, while the other one – in a suicide jacket – attempted to scale the church boundary wall,” said Emmanuel.

“Akash rushed to grab him by his leg. The suicide bomber warned him to get away, as he had a suicide jacket. But Akash pulled him down and left the bomber with no choice but to blow himself up, instantly killing Akash and several others.”

Asher Wasim, a member of Christ Church who arrived there within five minutes of that attack, said that he’d been later told that, despite the claim from the government that police thwarted the attacks, two of the three policemen outside St. John’s Catholic Church had been watching the cricket in a shop near the church.

The news of the attacks immediately spread across the country, and other churches quickly brought their services to a halt. 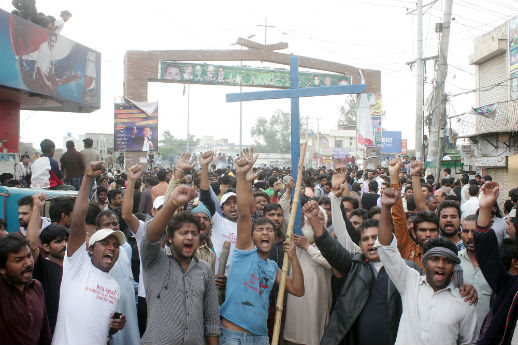 Jamaat-ul-Ahrar, a splinter group of Tehreek-e-Taliban Pakistan that for a brief period pledged allegiance to the self-proclaimed Islamic State, has claimed responsibility for orchestrating the attacks.

“We promise that until an Islamic system is put into place in Pakistan, such attacks will continue. If Pakistan’s rulers think they can stop us, they should try to do so,” their representative told al-Jazeera.

Jamaat-ul-Ahrar claimed the attack was carried out by the Aafia Siddiqui Brigade, named after Aafia Siddiqi, a Pakistani woman sentenced in the United States to 86 years in jail for helping the Taliban in Afghanistan.

Imran Khan, leader of the country’s second largest political party, Pakistan Tehreek-e-Insaf, in a tweet described the incidents as “shameful”.

Strongly condemn terror blasts outside church in Lahore. Shameful how no govt protection was provided for the church.

Angry protestors immediately came out and blocked Ferozepur Road, the main road to the nearby border with India – at one end of the Yahounabad colony. They pelted cars with stones and did not allow the police to enter the colony for about three hours.

Yahounabad residents had helped to elect the Chief Minister of Punjab, Mian Shahbaz Sharif, from the ruling party, Pakistan Muslim League-Nawaz (PML-N). But the protestors were not willing to negotiate with Senator Kamran Michael, from his party, a well-known Christian leader in politics.

What is known for certain is the two Muslims were beaten by an angry mob and eventually burned alive on Ferozepur Road. A man spoke out on Monday to say that his brother, Naeem, a glasscutter, was one of them and that he had nothing to do with the church attacks.

The burning of two suspects on Sunday divided Muslims in Pakistan over the tragedy. One young Muslim commented on a post on the Yahounabad issue as following:

“Christians (Chuhras) have set on fire two Muslims today. I am only sad about their death.” Chuhra is a pejorative term often used to describe Christians.

As a response, a protest rally by Muslims was staged March 16 in Dulam, a mile away from Yahounabad, where about 25 Christian households are located. Christians living in Dulam immediately called Christians of other areas, fearing an attack by the rally, which changed its route after police warnings.

Minority-rights activist Napoleon Qayyum told World Watch Monitor that a Christian, Riaz Masih, was battered with the butt of a gun angry by Muslims on March 16 in Kasur, about 50 miles from Lahore.

“Riaz took part in a rally to condemn the Yahounabad attacks,” Qayyum said. “But a number of Muslims gathered there took offence and critically beat Riaz, who was later hospitalised.”

Qayyum, who lives 100 yards from St. John’s Catholic Church, said police were not providing security to the church. “The local police station had been requested to provide a walk-through gate for security, but no such measure was put in place,” he said.

A Catholic nun, identified as Sister Arsene, who had reached one church 30 minutes after it had been attacked, tried to explain to the BBC why the subsequent anger had spilled out of control. “We’re treated as second class citizens,” she said. “We’d like the government to give Christians our due place and due right. That’s why the angry youths reacted.”

However, the Christians of Yahounabad again took to the streets and again blocked the Ferozepur Road. The situation between Christians and Muslims of the area deteriorated to the point that police used tear gas and water cannon to disperse protesters, after at least seven people were injured.

By the evening of March 16, the Pakistan Rangers were deployed to keep order. The Rangers are part of the paramilitary forces of Pakistan, and operate directly under the Interior Ministry.

One Pakistani Christian told World Watch Monitor: “Yesterday it was terrorism. Today it’s turning into communal strife. Just one stupid act, and we are all now at risk,” the Christian said, in reference to the killing of the two Muslims.

Christians, about two per cent of Pakistan’s population, are mostly concentrated in small settlements. They are often poorly educated and illiterate due to lack of opportunity and discrimination.

Anjum and Qayyum suggested that the two church security volunteers who died, Akash and Obaid, be given a civil award to recognise their valour and service to the Christian community and the country. “In the past, Aitzaz Hassan was awarded for stopping a suicide bomber from entering his school. He was awarded by the government. But when such an act of bravery is done by a Christian the government doesn’t recognise their service.”

In October 2013, shortly after twin suicide bombers killed 96 and injured 133 in Peshawar, three men were arrested, after they were spotted at a wedding in St. John’s Catholic Church, the same church attacked on March 15.

The men, Pashtoon in origin, were spotted by security guards, who noticed the outsiders and asked why they had come to the wedding. When they could not provide a reason, they were handed over to the police.

Locals say they have noticed Pashtoons, from the north-west region of Pakistan bordering Afghanistan, moving into Yahounabad – one of the largest Christian settlements in South Asia – in recent years. They add that they are concerned not only by possible terrorist attacks, but also of increasing hostilities to the long-term residents, such as trying to manoeuvre them out of this prime area of the city, by buying up land.