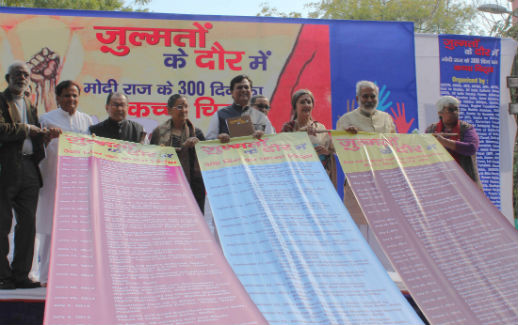 At a March 19 rally in New Delhi, Christian and Muslim activists unfurl a list of what they consider atrocities against religious minorities during the first 300 days of rule under India’s Bharatiya Janata Party.World Watch Monitor / Anto Akkara

A report was circulated, which listed 168 incidents of anti-Christian violence and harassment since Modi took power, and 222 occasions of “hate speech and media campaigns” from Hindu fundamentalist outfits.

Long banners were unfurled from the podium, listing the atrocities, as the author of the report, outspoken Christian activist John Dayal, took to the stage alongside opposition party leaders and activists.

“What we have compiled is perhaps a tenth of the actual number of incidents,” said Dayal, whose report is titled, “300 DAYS – Documenting Hate and Communal Violence under the Modi Regime.” 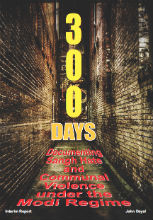 “Desecration and destruction of churches, assault[s] on pastors, illegal police detention of church workers, and denial of Constitutional rights of Freedom of Faith aggravate the coercion and terror unleashed in campaigns to [force converts to Christianity to return to Hinduism],” states the report.

Since May 2014 – when the BJP, under Modi’s leadership, assumed the mantle of the Indian government after its landslide victory – “there has been a marked shift in public discourse” on several counts, Dayal notes.

“Mr. Modi came into office riding a promise of development, his election campaign fuelled by unbridled hate against Muslims and Christians. Development remains a mirage, but the hate has fuelled violence across the country.”

Dayal told World Watch Monitor that, in total, there have been over 600 cases of violence, 168 targeting Christians and the rest against Muslims.

“We have not yet [received] the list of atrocities on Muslims,” said Dayal, who is also the spokesperson for the United Christian Forum, which tracks atrocities against Christian minorities.

“There has been a relentless foregrounding of communal identities [by Hindu nationalists], a ceaseless attempt to create a divide between ‘us’ and ‘them’,” the report adds.

“Hate statements by Union [federal] and state ministers, threats by Members of Parliament, state politicians, and cadres in saffron caps or Khaki shorts [symbols that have come to be associated with the Hindu nationalist movement, Hindutva] resonate through the landscape. But, most cases go unreported, unrecorded by police.

“The Prime Minister refuses to reprimand his Cabinet colleagues, restrain the members of his party or silence the Sangh Parivar [Hindu fundamentalists] which claims to have propelled him to power in New Delhi.”

“I am standing before you not as a Christian but as a citizen of the country. The state of affairs is dangerous,” said Archbishop Emeritus Vincent Concessao of Delhi, addressing the protesters after the report’s release. “We have to raise our voices against what is happening.”

“The attacks on minorities have a larger agenda,” said Digvijaya Singh, a senior leader of the Congress party that led two successive governments before the BJP assumed power.

“This is a question of ideologies. A fascist ideology is trying to replace the secular ideology of the nation,” said Singh, who is also General Secretary of the All India Congress Committee.

Ali Anwar, a socialist member of the Indian Parliament from eastern Bihar state, said there is a danger that India could become a fascist state in the mould of Hitler’s Germany.

“Attempts are being made to break up the people and the nation on the basis of religion. This is a threat to communal harmony and the unity of the nation,” said Anwar.

“Christians and churches are being attacked. It is not the question of one community. Everyone is worried,” said Raghuvansh Prasad Singh, a Hindu and cabinet minister in the previous government.

“If this is the state of affairs after 300 days, Singh said, “What will be the condition after five years? The nation is not built with bricks and cement, but with the unity of minds and hearts. If the unity of the people is destroyed, there will no progress.”

Amarjeet Kaur, National Secretary of the All India Trade Union Congress and senior leader of the Communist Party, noted that, apart from the attacks and hate crime against religious minorities, Modi’s government is trying “to replace history with [Hindu] mythology”.

While heads of historical and educational institutes have been replaced with those subscribing to Hindu nationalist agendas, attempts are being made to glorify even the man who killed Mahatma Gandhi – Nathuram Godse – known for his Hindu nationalist moorings, said Kaur, a Sikh.

Several speakers at the seven-hour protest, which took place at the Jantar Mantar demonstration area near Parliament, condemned the brutal gang-rape of a 74-year-old Catholic Mother Superior on March 14 at the Convent of Jesus and Mary in Ranaghat, 75km from Kolkata.

The gang-rape of the nun, they said, has sent shockwaves throughout India and the world.

“Protect not just cows, but human beings also,” was the opening sentence of the report, a reference to the comments of Cardinal Baselios Cleemis Thottunkal, President of the Catholic Bishops Conference of India, who visited the nun in hospital after she had undergone surgery.

The reference to cows came in the wake of the recent ban on the sale or consumption of beef in Maharashtra State, governed by the BJP.