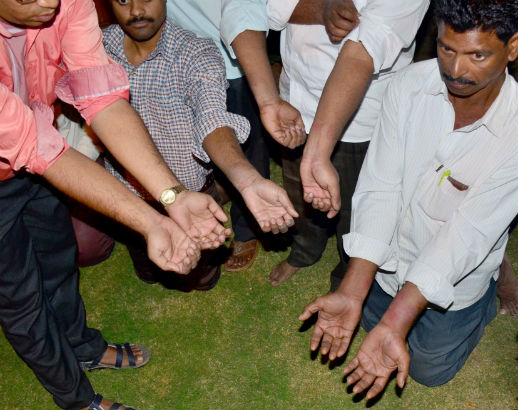 Twenty Christian men on an evangelical mission in north-western India last week were illegally detained and tortured by police, according to a human rights group which intervened to force their release.

The People’s Union for Civil Liberties worked with local Christians to persuade senior officials to sanction the release of the men, but several were left with severe bruising after the Feb. 25 incident in Jaipur, the capital of India’s Rajasthan state.

“We spoke to the Superintendent of Police about the illegal detention and custodial torture,” read a Union memorandum, issued later.

Pastor Stephen Raj, one of the leaders of the team from the Hebron Bhakta Singh Fellowship Church in the southern city of Hyderabad, told World Watch Monitor he was “thankful to all of them for rescuing us, especially Kavita [Srivastava],” the regional head of the People’s Union for Civil Liberties.

The team had only that morning arrived in the tourist city of Jaipur – known as the ‘Pink City’ for its terracotta-coloured buildings.

“We went to Rajasthan with a plan to go around preaching and sightseeing for four days, but it lasted only a few hours,” Raj said.

The men had arrived at Jaipur’s Mansarovar Centre in the afternoon, equipped with a megaphone, intending to preach and to distribute evangelical literature.

“As soon as we started, a man came and asked, ‘What is this?’ He took our leaflet and went. He must have called the police,” Raj said.

When a group of Hindu protesters amassed, the police – in a state governed by the Hindu nationalist Bharatiya Janata Party – dispersed them.

But later, as the Christians were walking back to their hostel, the hardliners followed.

“When we reached the place we were staying, they started abusing us and called the police again,” Raj said. “The police came and took us to the police station in two jeeps. They made us stretch out our palms and beat us severely with wooden lathis,” sticks often carried by Indian police. “Those who pulled their hands back after the first beating came in for more beatings. Many of us have bruises and blood clots on our palms six days later.”

“If they [the human rights activists] had not reached us promptly, we might have had to face more torture,” Raj said.

Srivastava said she was “happy that we could reach there in time and rescue them from the police.”

After Srivastava’s intervention, senior officials ordered the police to take the Christians back to their hostel late that night, said Walter Masih, the evangelical pastor who had coordinated the visit of the preaching team.

However, according to the statement of the People’s Union for Civil Liberties, “The police who had gone to drop [off] the 20 [Christians] had pressured the owner of the hostel…to not let them spend the night there. The [Christians] were thrown out with food and water on the road and told to make their way to the railway station and not return to the city. They were told that cases of [forced] conversions would be filed if they would not leave the city.”

Masih, who was attacked by Hindu hardliners while holding a Sunday service in Jaipur in 2007, said: “Police ordered them to carry their luggage and told them they would be dropped at the railway station. But the police left them on the [side of the] road around midnight.”

The men were left to find their own way to the bus station, where they boarded a bus to New Delhi, 270 kilometres north, before taking a train to Hyderabad the next day.

“The Hindu fundamentalists were there shouting slogans even against us Hindus while we were in the police station. That shows the danger the country is facing today,” said Srivastava. “This is a clear case of the police being used to harass minorities, especially Christians.”

Srivastava said the incident occurred less than 48 hours after Mohan Bhagwat, national chief of the right-wing Hindu group, Rashtriya Swayamsevak Sangh, attacked the work of Mother Theresa on his own visit to Rajasthan on Feb. 23.

Bhagwat, addressing a women’s empowerment program in a village in the Bharatpur district, said: “It’s good to work for a cause with selfless intentions, but Mother Theresa’s work had an ulterior motive, which was to convert the person who was being served to Christianity.

“In the name of service, religious conversions were made. This was followed by other institutes, too,” Bhagwat told the women’s conference.

Bhagwat is campaigning for India to become a Hindu ‘Rashtra,’ or nation. The Bharatiya Janata Party, political front of the Rashtriya Swayamsevak Sangh, has held a majority in the Indian Parliament since May 2014.

Bhagwat’s comments about Mother Theresa sparked a national furore that even disrupted the Indian Parliament; the Upper House was briefly adjourned as it debated the issue on Feb. 26.

“The whole nation was shocked by Bhagwat’s statement,” said Srivastava. “The RSS has its clear agenda – to create animosity against the Christians and others. The result is before us…. As long as such hate speeches are not stopped, the attacks against Christians and others will only increase.”