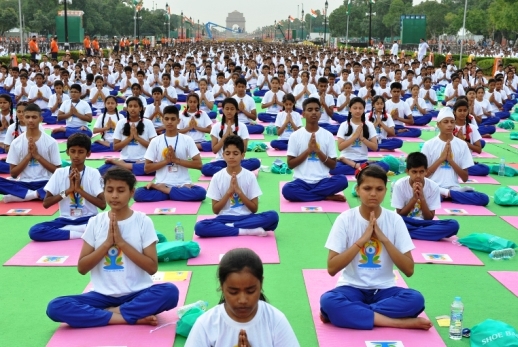 As you may have seen, June 21 was the first-ever International Yoga Day, observed from New Delhi to New York. In yoga’s birthplace, India Prime Minister Narendra Modi himself led a yoga session attended by 37,000 people in the heart of Indian capital.

June 21 also was a Sunday, and that’s why several of India’s Christian organizations voiced their opposition — not to yoga itself, but to another big national event scheduled on a Christian holy day.

“Holding such high profile programs on Sundays and other Christian holydays is a serious concern to us,” said P B M Basaiawmoit, former vice president of the National Council of Churches in India, a coalition of 30 Orthodox and Protestant churches.

“It’s not that we do not welcome yoga minus its (Hindu) religious connotation since it has merits for mind exercise and relieving stress. However, the hype and overboard is just too much,” said Basaiawmoit, who is a senior Presbyterian church leader in the north-east of India

Yoga Day is the latest of several attempts by India’s government, currently ruled by the Hindu-nationalist Bharatiya Janata Party, to hold high-profile events on Christian holy days. The government declared a nationwide observance of “Good Governance Day” on Christmas. It convened a national conference of judges on Good Friday. India’s education minister has said yoga would become part of the federal school curriculum, and a top official of one of India’s 29 states told a Catholic convention that Christians should start reciting Hindu mantras as part of their worship services.

“Our sacred days are being disrupted under different pretexts,” said Cardinal Baselios mar Cleemis, president of the Catholic Bishops Conference of India, at a June 11 news conference.

Church leaders in tiny, Christian-majority Mizoram state in the northeast issued a statement describing the scheduling of International Yoga Day on a Sunday as “extremely regrettable” and urged Christians to ignore the observance. Earlier this year, the church leaders submitted a memorandum to Bharatiya Janata Party President Amit Shah protesting the scheduling of “Good Governance Day” and the judges’ conference on Christmas and Good Friday, respectively. Kurian Joseph, a Catholic judge in the federal Supreme Court, made national headlines when he boycotted the conference.

As for International Yoga Day, India Foreign Minister Sushma Swaraj offered assurances that “we’re not forcing any one to participate. There’s no threat, no coercion.”

The National Council of Churches in India was not reassured.

“In spite of the declarations made by the (federal government), in many states, circulars have been sent to schools to have compulsory Yoga practices

,” the council said in a June 18 statement. “We oppose such compulsions and especially minority run-institutions should be given the freedom to decide how and whether to introduce yoga in their schools.”

‘Leave India’ if you oppose yoga

The council statement then turned its attention to senior BJP legislator Yogi Adiyanth, who had declared that those opposing yoga and surya namaskar

, a Hindu salutation to the sun god within yoga, “should leave India or drown themselves in the ocean.”

“Statements such as these make minority communities suspicious about the intentions of the government,” the council statement said. “We urge the Government to be sensitive to the different cultural and religious practices in our country.”

“This event was supposed to bring people together, but statements by senior BJP leaders are polarising people. These are damaging and unnecessary,” said one yoga teacher, Aashish Nanda, to the BBC

on June 18. “Yoga is in a way Hindu because it comes from Gita and (Hindu god) Shiva was the first yogi. And the way the BJP is projecting it, there seems to be an agenda here.”

that Indian Christians should start reciting Hindu vedas, or sacred texts, during worship services or private prayer, as a way to become more deeply connected to Indian culture. He said it could help the church overcome the perception that it is a foreign influence.

Protestant theologian Joshwa John did not see it that way, saying Thomson’s suggestion “shows his ignorance about both his own Christian tradition as well as the diversity of the Hindu tradition.”

P B M Basaiawmoit, the former council of churches president, said the government’s emphasis on yoga is telling, given the long roster of global observances dedicated to water, biodiversity, the environment, Earth, desertificication, human rights, indigenous peoples, and others.

“Does the Government make a push for these to be observed and to promote in letter and spirit?” he asked. “This year is the International Year of the Soil. Government has not come out with strategies as to how we can stop raping and polluting mother earth

AC Michael, a Catholic and former member of Delhi Minorities Commission, said the government push to celebrate yoga – a philosophical discipline deeply connected to Hinduism among other religions – is heavy handed.

“This is like if one is staying in a country of one particular religion majority country, one must adapt to that country’s majority religion’s culture and way of worship,” Michael said. “I would like to know from my friends here: Would they like to advise Muslims, Hindus and other faithful to recite ‘Our Father’ in Christian majority countries?”