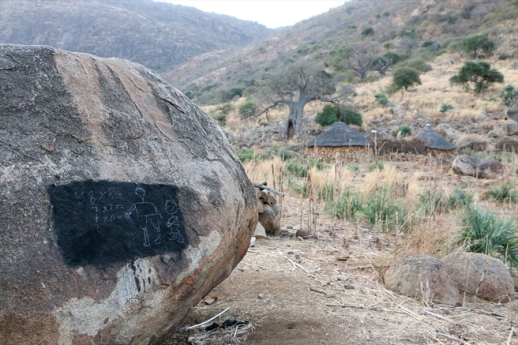 The recent trial of nine young Christian women in the Sudanese capital Khartoum for wearing trousers and skirts – deemed “indecent or immoral dress” – brought fresh attention to the plight of Sudan’s Christian minority.

The nine women were from the Nuba Mountains in Sudan’s South Kordofan state, described by Operation World as “an island of mostly Christian peoples in a sea of Islam”.

The Nuba Mountain region was one of the key disputed areas between North and South Sudan, but eventually went to the North, becoming part of the Islamic Republic of Sudan. Since South Sudan’s independence in summer 2011, Sudan’s government – led by Omar al-Bashir, the only sitting President wanted by the International Criminal Court for alleged crimes against humanity – has waged a “relentless” bombing campaign on the South Kordofan region, according to a July report by Amnesty International (AI).

“Since the start of the [four-year] conflict, the civilian population in South Kordofan has been living in desperate conditions, fleeing from relentless bombardment and seeking refuge inside foxholes and caves, with limited access to food, water, and medical care,” according to AI’s report, Don’t We Matter? Four Years of Unrelenting Attacks Against Civilians in Sudan’s South Kordofan State.

AI estimates that “at least one-third of the state’s population of 1.4 million people may be internally displaced … living in precarious and insecure conditions in which food and other humanitarian needs are often unmet and communities remain vulnerable to ongoing armed attacks”.

After a recent visit to the area, Christian charity Open Doors International reported that “daily” and “indiscriminate” bombardment has led to the destruction of Christians’ homes, churches, schools, hospitals and crops. 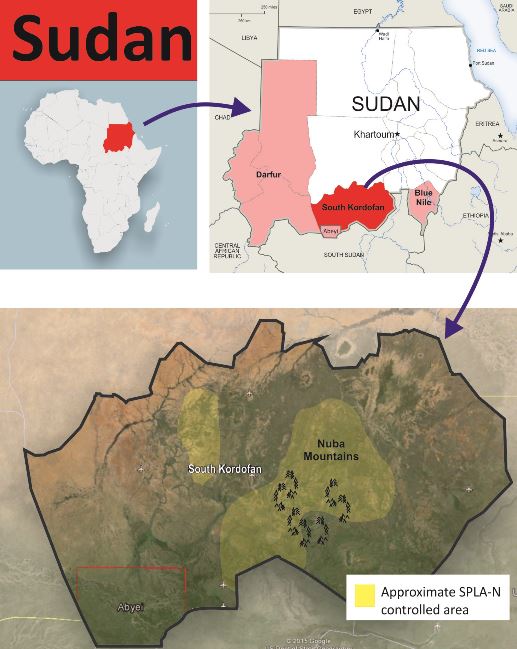 For a large part of its history, Sudan has seen armed conflicts within its borders. Religion has played a major role in these conflicts.

While the North has been dominated by Muslim Arab tribes, the South has been dominated by the mainly Christian and Animist African people. Shortly after independence from colonial rule in 1956, the Arabization and Islamization policies of the northern government led to a continuous build-up of tension between the North and the South. When the government implemented Sharia in 1983, it ignited full-scale, brutal civil war that lasted more than 20 years.

In 2005, that war came to an end with the signing of the Comprehensive Peace Agreement (CPA). The agreement was a set of protocols that provided a roadmap for peace and included rulings on matters such as governance and oil-revenue sharing. An important facet of the CPA was the fact that it allowed for a referendum on secession for the South. However it lacked clarity on the future of the three border areas (Nuba, Abyei and Blue Nile), which have great strategic, economic and geographical importance, and large oil reserves.

Although these areas had fought for independence alongside the South, the CPA only offered an ill-defined “popular consultation process” for them.

Following the South’s secession in 2011, tension immediately started building between the government and the people in the Nuba Mountains because the government remained dedicated to Sharia and constantly frustrated the political process by which the Nuba people could gain greater autonomy. By June 2015 the process had broken down completely and the Sudan People’s Liberation Army North (SPLA-N) rebel army took up a battle for greater autonomy, and to a large extent, religious freedom. The Government of Sudan responded with clout and started a brutal campaign to suppress the rebellion. 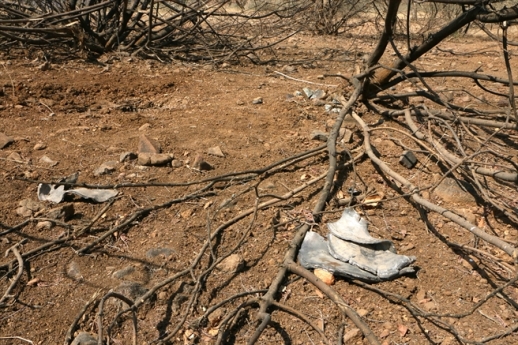 These bomb fragments were photographed near to a secondary school.Courtesy Open Doors International

In July 2015 The New York Times’ Nicholas Krystof and his colleague produced a video report, The Worst Atrocity You’ve Never Heard Of, which provides a graphic insight into what life is like for the people of the Nuba Mountains.

Amnesty International’s report describes how the government has been using unguided bombs, dropped out of the back of Antonov aircraft, which do not allow for accurate targeting to distinguish between military and civilian targets. The Government of Sudan has also been accused (by organisations such as Nuba Reports) of deploying long-range shells (Uishi missiles), incendiary bombs and cluster bombs to burn buildings, grass and crops.

In the two weeks before Open Doors International’s visit to the region, the charity reported that bombings had killed 41 people and injured many more. A hospital was also destroyed, as well as four churches and one school. Sorghum which the community cultivated the previous season was also burned.

Prior to these attacks, eight other churches had been destroyed, although no-one was killed because the Christians had stopped using the churches and were meeting under trees due to the constant bombings.

“Three weeks ago the aircraft came and attacked my village,” added another man, “Filip”. “As the people came from school they gathered at a borehole to drink water. An aircraft dropped two bombs on those boreholes. [They] killed one and injured another. Several livestock were killed. Near the borehole there was a rakuba [storehouse] with sorghum. It was burned down along with the village … That village was destroyed.”

“Government attacks against civilians … are accelerating at an alarming pace. Rape as a weapon of war has become a daily occurrence. Aerial bombings have displaced hundreds of thousands of civilians,” according to US-based Sudan advocacy group, Operation Broken Silence. 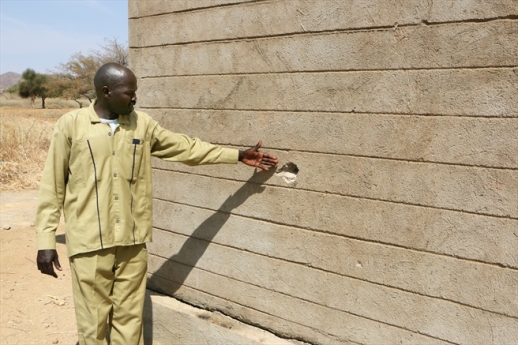 A primary school teacher points out the damage caused by recent bomb strikes, which forced parents to remove their children from the school and to build a temporary hut elsewhere.Courtesy Open Doors International

Amnesty International’s report describes how hundreds of civilians have been killed, and thousands injured, through continued attacks that have resulted in a deepening humanitarian crisis, which, Amnesty says, the international community has not done enough to respond to.

International organisations, including the UN, international aid agencies and foreign journalists have faced considerable difficulty in monitoring the human rights situation in the state because of sweeping restrictions by the Government of Sudan on access to the area. These difficulties are compounded by the fact that South Kordofan State has been under a state of emergency since 2011.

The Office of the UN High Commissioner for Human Rights in August 2011 prepared a report documenting the wide range of serious violations of human rights and humanitarian law and recommended an independent, thorough and objective inquiry, but that recommendation has not been taken up by the UN Human Rights Council or the UN Security Council. The report has not been discussed or acted upon in any way by UN bodies. No action has been taken at regional or international level either, says Amnesty.

The African Union (AU) created the AU High-Level Implementation Panel on Sudan and South Sudan (AUHIP) in 2009 to assist the Sudanese parties in the implementation of the CPA. The mandate of this Panel has been successively renewed and is currently extended until December 2015. However, the mediation process between the Government of Sudan and armed opposition groups in South Kordofan, Blue Nile and Darfur, led by the AUHIP, has reached an impasse, since being suspended in December 2014.

In January 2014, after President Al-Bashir announced a “National Dialogue” ahead of elections in 2015, the AUHIP said it hoped “to realise a genuinely inclusive and transformative National Dialogue”.

The AU Security Council mandated the AUHIP to convene a meeting at the AU Headquarters in Addis Ababa in March 2015, but the Government of Sudan did not send a delegation.

A temporary school built by the parents of these children, after their school was twice nearly destroyed.Courtesy Open Doors International

While the crisis is deepening, the government has continued to deny some humanitarian access to the areas it holds (although Amnesty reports that this has improved over the last year).

The last time there was an international initiative on humanitarian access was in 2012 but the agreement expired in November 2012. Several unsuccessful attempts were made between 2013 and 2014 to address the issue in peace talks between the SPLM-N and the Sudanese government, facilitated by the AUHIP. (Restricting the provision of humanitarian assistance to civilians is prohibited by customary international humanitarian law.)

AI points out that, according to a Famine Early Warning System (FEWS) report in April 2015, an estimated 3.7 million people in Sudan are ‘food insecure’, 15 per cent of whom are in South Kordofan. The areas worst affected are those held by the SPLA-N.

In addition to restricted humanitarian access, the bombings have substantially damaged or destroyed civilian areas and objects (such as hospitals, schools and fields) and food infrastructure (such as food stores and sorghum mills).

The fear and displacement caused by the bombings has also meant that local residents are often too afraid to work in their fields, with devastating consequences for food security.

“When we go to cultivate the land, we are always thinking about our children staying at home, fearing that things will happen to them at any time,” a woman, referred to as “Aloia”, told Open Doors International. “If you want to go and fetch water, you have to walk very far, fearing because at any time you can meet the Antonov that bombs the sources of water.

“Many have run to caves or to the tops of the mountains. People are not coming to church anymore, because they are scared of meeting in one place. When they are together as a crowd they fear that they will be harmed by the bombs and long-range missiles.”

Bombings have also had a devastating effect on education. According to AI there were six secondary schools in SPLA-N-controlled areas before the conflict began. Now only three secondary schools remain operational.