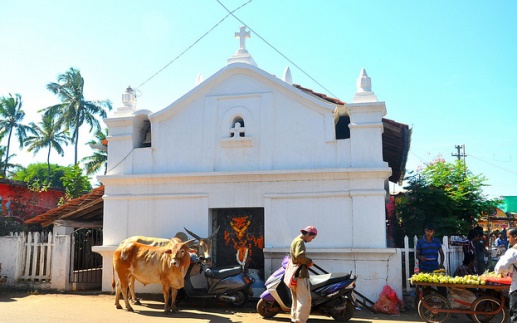 Two cows, a sacred animal for Hindus, stand outside a church in Anjuna Flea Market in Goa.Eustaquio Santimano / Flickr / CC

Two members of India’s ruling BJP party, one in the Lower and one in the Upper House of the national Parliament, plan to introduce a Private Members’ Bill, each in their respective House, to introduce a national law against conversion from Hinduism, which would then force a debate in the Parliament.

The MP in the Upper House, Tarun Vijay, a former journalist, represents Dehra Dun in Uttarakhand (formerly Uttaranchal) state on the northern border of India, between Himachal Pradesh and Nepal. Himachal Pradesh has already introduced a Freedom of Religion Act, which seems harmless in name but which seeks to regulate freedom to change one’s religion.

In an interview with The Tribune, he said the recently released Indian “religion” census had indicated that, “For the first time, the population of Hindus has been reported to be less than 80 per cent. We have to take measures to arrest the decline. It is very important to keep the Hindus in majority in the country”.

He went on: “My argument is that religion must remain a matter of personal choice. But in India, it has become a political tool in the hands of foreign powers, who are targeting Hindus to fragment our nation again on communal lines. This has to be resisted in national interest and in the interest of all minorities in India.”

Vijay is reported to have said his proposed bill will advocate for a “non-bailable warrant to be issued against the person found engaged in the act [of conversion], along with a ten-year jail [sentence]”.

“For the first time, the population of Hindus has been reported to be less than 80 per cent. We have to take measures to arrest the decline. It is very important to keep the Hindus in majority in the country.”

The MP in the Lower House, Yogi Adityanath, is a senior BJP legislator, who became head priest at a well-known Hindu temple in Gorakhpur after the death in Sept. 2014 of his “spiritual father”. He is also the founder of the Hindu Yuva Vahini, a social, cultural and nationalist group of youths who seek to provide a right-wing Hindu platform.

In June, Adityanath declared that those opposing yoga and surya namaskar, a Hindu salutation to the sun god within yoga, “should leave India or drown themselves in the ocean”.

On 21 June, the first-ever International Yoga Day was observed from New Delhi to New York. In yoga’s birthplace, Indian Prime Minister Narendra Modi himself led a yoga session attended by 37,000 people in the heart of the Indian capital.

The date was also a Sunday, which is why several of India’s Christian organisations voiced their opposition – not to yoga itself, but to another big national event scheduled on a Christian holy day.

“Statements such as that [about leaving India or drowning in the ocean] make minority communities suspicious about the intentions of this government,” a statement from the National Christian Council of India said at the time, continuing: “We urge the Government to be sensitive to the different cultural and religious practices in our country.”

The two Private Members’ Bills come shortly after a sixth Indian state has started the process of introducing an “anti-conversion law”.

These moves also come as Hindu nationalism has come under criticism from the Muslim population of India, in the aftermath of last week’s lynching of a Muslim in Uttar Pradesh, who had allegedly been storing and consuming beef at his home.

A total ban on beef was enforced in the west Indian state of Maharashtra in March, outlawing the slaughter, consumption or even possession of beef. A number of other states tightened their laws, including Uttar Pradesh.

At the time, commentators suggested the ban would hit minorities hardest. India is a secular nation where almost half the population eats beef, though most of the majority Hindus abstain, believing that cows are sacred. Some Hindus do eat beef, as well as Dalits (16.6% of the population), Muslims (14.88%), Christians (2.3%) and Sikhs (1.9%).

“This ban is an insult to the poor and the Dalits,” said Rev. Manohar Chandra Prasad, a pastor of the Church of South India (CSI).

Now, after the lynching of the man in Uttar Pradesh state, the village’s headman, Ahsaan Chaudary, said: “The situation now is such that a Muslim villager can’t buy a cow and bring it home. We will be attacked or may even be killed. It is easy to accuse that the cow is being taken to be slaughtered,” the BBC reported.