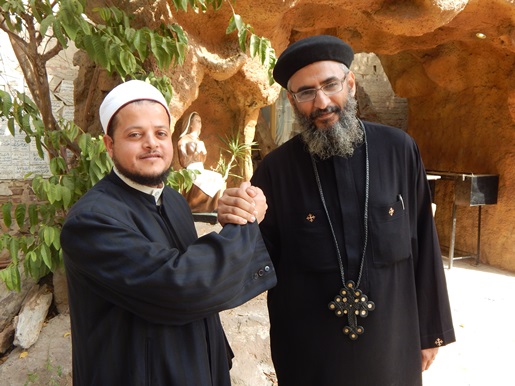 For three years, the Imam-Priest Exchange has brought Christian and Muslim leaders together to deepen religious unity.World Watch Monitor

“Working together for the sake of Egypt – we are in great need of this slogan,” said Grand Mufti Shawki Allam, in reference to the Imam-Priest Exchange, an initiative of the Egyptian Family House. “But it is also the reality in which we live.”

The Egyptian Family House was created shortly after the 25 January, 2011 revolution against President Mubarak – in partnership between al-Azhar (Sunni Islam’s leading authority), the Coptic Orthodox Church, and Egypt’s Protestant, Catholic, and Anglican denominations. The Imam-Priest Exchange began in February 2013, as popular opposition to the Muslim Brotherhood and then-President Mohamed Morsi was coalescing throughout the country.

According to Abdel Rahman Moussa, an advisor to Grand Imam Ahmed al-Tayyib and speaking on his behalf for al-Azhar, “This scene is what we have dreamed of – a sincere expression of what Egypt is, the Egypt that God has preserved.”

“We were all wondering where Egypt was going,” said Bishop Mouneer Hanna Anis, whose Anglican church sponsored the training. “But now we celebrate the return of love and the brotherly spirit.”

Each year the Exchange brought together around 70 imams and priests from across the country. Four trainings of three days each had them live and eat together as they were encouraged towards a gradual but escalating partnership.

The themes? “Let us know each other. Let us coexist. Let us cooperate. Let us work together for the good of Egypt.”

Participants not only listened to academic lectures, but also actively toured the country. Egyptian citizens looked on astonished, but proud, taking selfies with imams and priests as they walked hand-in-hand down busy streets.

Their distinguished long robes, caps, and beards added to the gravity of ancient mosques, churches, and monasteries. Together they joined fellow citizens in celebrating the opening of the Suez Canal expansion. They rediscovered a shared heritage while exploring the Coptic, Islamic, and National Egyptian museums. And in the final session they visited practical examples of interfaith development work.

“We want to go where people have done things,” said Saleem Wassef, project manager for the Exchange. “The idea is to help them think out of the box, and consider how they can repeat these experiences back in their own communities.”

Moving from remedy to prevention 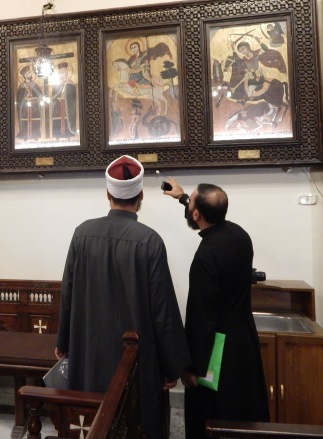 Religious leaders from the two different faiths visited each others’ places of worship.World Watch Monitor

This last marker is an important departure from the previous model of imam-priest cooperation, said Nady Labib, representing the Protestant Churches of Egypt. He criticised the “hugs and kisses” displayed in the media after incidents of sectarian tension, to present an image that “all is fine” between Muslims and Christians.

The Family House has been active in quelling sectarian tension, said Fr. Augustinos Elia, assistant head of the branch in Mallawi. But the focus now is on prevention, not remedy.

“We are removing walls and building bridges,” he said. “A certain extremism still persists in society, and we are working to educate and spread awareness.”

One of the best examples is found in Ismailia, where Sheikh Abdel Rahman and Fr. Surial have visited four schools a week for the past two years. Having never before seen such respect and friendship between an imam and a priest, the girls often cry when they see the two together, they said.

Consider also the work of Sheikh Ahmed and Fr. Boula in Menoufiya, where the “My Church, My Mosque” campaign collected money from Muslims to build a church, and from Christians to build a mosque.

Even in Delga, a community whose church was destroyed following the removal of Morsi from power, Sheikh Fayed and Fr. Ayoub have worked to bring Muslims and Christians together. Medical and sport outreaches have tried to unite the people, with youths brought to Cairo to witness the Family House in action.

Wassef said the local branches of the Family House are one of the best successes of the Imam-Priest Exchange. And those trained have gone on to help establish branches in Port Said, Alexandria, and Luxor.

“At first the participants were afraid to be involved,” he said. “But once they knew about the goals, they were convinced about the need to work together for the benefit of their communities.”

Bishop Armia, assistant general secretary for the Family House, related the story of an imam who told him he used to cross to the other side of the street if he saw a priest coming his way. Now, after spending a year together in the Exchange, he has become friends with a priest from his town.

Sheikh Muhi al-Din al-Afifi related a similar experience. Head of the Islamic Research Academy, as well as the Family House committee for religious discourse, he told those gathered of his first visit to a monastery, where he was pleasantly surprised to see such faith and activity mix for the good of Egypt.

“This project works to change the inherited teachings that have sown hatred among us,” he said. “It is the tip of the spear that confronts all manner of civil strife.” 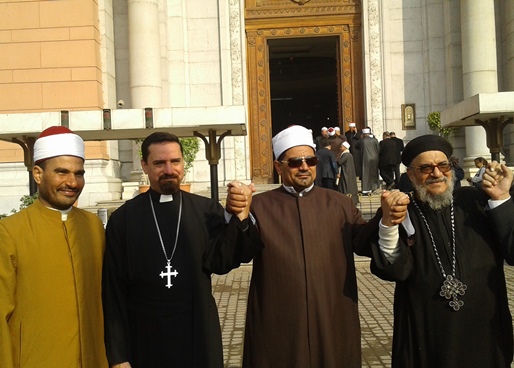 But not all participants were totally convinced by the project, with one Sheikh saying there was ‘not enough connection between words and actions’.World Watch Monitor

Not all participants, however, were as convinced. Some grumbled that the “religious other” was present only from obligation. Others complained that there was little contact between them once they left the training.

One leader in one branch confirmed this impression. Only 20 per cent of the roughly 100 members acted from full and sincere conviction, he said. Forty per cent came because they were assigned by their religious institution, and another 40 per cent were active for personal or political gain.

Another issue is that the Family House has not yet been able to win wide national media attention. “We are here, but no one sees us,” said Sheikh Said Shoman, a participant from the Sohag branch, who encouraged much more open mixing of imams and priests in the streets. “The problem is there is not enough connection between words and actions.”

The work is slow going, the branch leader admitted, but he is not discouraged. Their branch has held 10 seminars about national unity, and smaller meetings in youth centres and villages throughout the area. As a leader, he is frequently invited to government and civil society events as a Family House representative. But he considers it natural that cooperation between religious leaders takes time.

“Progress develops as someone first sees you, then later will talk to you, and only later might work with you,” he said. “There is a will to make the Family House work but it still needs more interaction.”

Wassef estimated that around 50 per cent of Exchange imams and priests have been active in pursuing the goals of the training. But if engaging men of religion has been hard work, convincing a sceptical public has been harder.

“Some of my colleagues in the ministry used to laugh at me, and some Christians say I am wasting my time,” he said. “But you meet some people who are ready to change. The progress is slow but sure.”

“We must look not to what Egypt can give us, but what we can give Egypt and the future generations,” he said. Adding a word to their slogan, he urged them, “Always, together for the sake of Egypt. This is a beginning, not an end.”