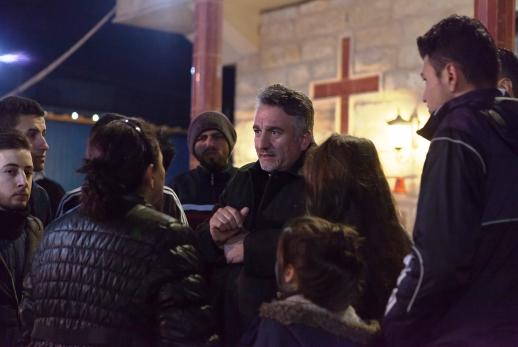 We know that some Eastern European countries have been specifying that they are happy to take Christians direct from Iraqi IDP camps, and months of work had started to identify and move some of them out to a new life in Europe.

But now, the closure of all airports in northern Iraq because of anticipated air attacks on Islamic State has left 150 already-displaced Christians temporarily stranded in the Kurdish capital, Erbil.

The group had all been selected to have flown to Slovakia today, direct from their camp, but officials told them to expect a delay of 48 hours.

Yesterday the group attended a farewell service held in Mar Elia church in Ankawa, the Christian neighbourhood of Erbil.

Over the past 15 months the whole Christian community in the church compound has bonded strongly.  Many of them have been living in a makeshift camp in the church’s garden after they, and thousands of others, fled cities now under Islamic State control. The Mar Elia leaders tried to accommodate as many of them as possible after they left Mosul, Karamlesh, Qarakosh and other villages on the Nineveh plain.

The group have had a common experience of hardship after arriving at the camp –  first living in different types of tents, then container-like shelters; bearing the same hot summers and cold winters, and all in a small church garden, with limited personal space.

Saying goodbye at a celebration dinner after the church service was a time for mixed feelings. Ramy, 22, said:  “It’s difficult for me to smile any more, but I want to, because I believe in goodbyes with a smile instead of with tears.”

However, the celebrations at the church were interrupted with bad news.

At 8:30pm Father Douglas, the leader of Mar Elia church, was told about the 48-hour closure of Erbil and other airports in northern Iraq. The precise reasons for closure weren’t given but Fr Douglas believes that potential air attacks on Islamic State were to blame: “Russia is said to be sending missiles to several targets and therefore the airspace needs to be ‘free’. My people are a little bit disappointed, but they have been waiting for 15 months already and so two days does not make much difference”.

Nisan Hekmat is one of the Christians who was about to travel to Slovakia with his family.  “They told me that travel is delayed for 48 hours. In Iraq this is not unusual. In other countries it may be different but here it’s ‘normal’ to hear good news and bad news all at the same time.

“It is difficult for us all. Friends and family came to say goodbye and now the journey has been put on hold. We have everything packed and we’ve given away things (that we can’t take with us) like rice and oil that other families will need.”

Hekmat and his family are resigned to spending a few more days in Erbil.

Iraq’s Civil Aviation Authority has given no update to Sunday evening’s notice about “possible missile movement throughout the airspace of northern Iraq”.

The group heading to Slovakia hear news about the delays