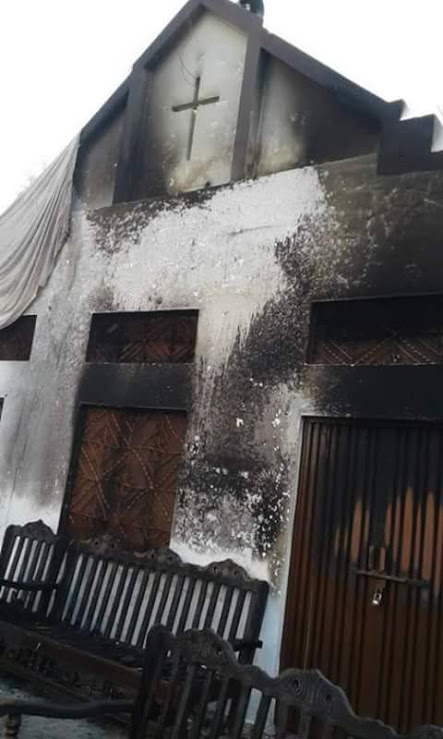 The Apostolic Church in Baath was attacked on 7 Jan.British Pakistani Christian Association

For Christians in Pakistan, the New Year has begun with attacks on their worship places, with three separate incidents in less than a week, including a church being set on fire.

On 7 January, items on top of a church roof were set on fire in Manga Mandi, on the outskirts of Lahore. The Apostolic Church is in the village of Baath, where about 50 Christian families live.

“The fire gutted the roof, but it could not enter the building because the iron doors were closed,” the catechist, Dildar Masih, told World Watch Monitor. He said that neighbours reported the fire had been started at around 1am.

“The police were called, who initially said it was a short circuit, but there were no electric wires near the fire and none were burned. Also, the church boundary wall had footprints, suggesting someone had scaled it. None of us saw anyone entering or leaving the church, so the suspect remains unidentified. The police have asked for two days and then it will be decided if a [police] First Information Report [FIR] will be lodged.”

Five hours later, a second incident took place in a village 80 kilometres away, near the India border.

At the Victory Church in Sandha Phatak, an intruder set fire to bibles and hymn books, before he was caught and locked inside. (The village is situated nearby the city of Kasur, where, in November 2014, there was a brutal attack on a young Christian couple, who were burnt alive by a mob, incited by an imam after allegations of blasphemy were made against the victims.)

Saddiqa Bibi discovered the man at about 6.30am, when she came for morning worship, as her husband, John Masih, recalls. She rushed back to tell him about it, as he had keys to the church.

“My wife and I immediately returned to the church and I locked the door from outside,” Masih told World Watch Monitor.

“We gathered other Christians, who informed the police, who arrived in about half an hour. Until then, the man first threatened us and then tried to bribe us. He also said that he was quite influential and that nothing could be done to him.

“In our presence, he told the police that he had come from Pasrur in Sialkot district [200 kilometres away] and that his name was Muhammad Azhar. The police took him into custody the same day, pending a medical assessment for mental health, and we hope justice will be done.”

Human rights activists Khalid Shahzad and Napoleon Qayyum told World Watch Monitor that the police suggested the suspect might have been insane and lit a fire to keep warm.

“It is unbelievable that the man came 200 kilometres to warm himself in very foggy weather, and entered a church where he only burned religious books,” they said. “Imagine if it happened in a mosque and the suspect had been a Christian. Imagine then how the police might have treated him and how others would have treated the suspect, and how Christians of the area would have suffered too.”

However, police officer Tariq Bashir Cheema denied that the police had thought the intruder insane.

The first incident of the year took place on 3 January (a Sunday), in a village near Pasrur, where Christians were worshipping and had invited other Christians from nearby villages.

The service was taking place in the compound of Bashir Masih, as the small church had already been forcibly closed after two Christian brothers, Saleem and Rasheed Masih,  were accused of blasphemy in 1999.

Though the brothers were eventually found not guilty by the court, they could not return to their village and the church on the land next to their house was taken over by locals.

The number of Christians has decreased since the two brothers were arrested. Below, Bashir Masih describes the events of 3 January:

“There are only four Christian families left in the village now, so we had invited Christians from other villages. We had acquired permission from the district police, but when the service was going on, Muhammad Rashid disrupted the gathering.

“We told him his disruption was quite disrespectful to our religion, but he said that none of the Christians could stop him. Though he continued his disruption, we took him out without any fight.

“Rashid, with his father, Arshad Ali, went to the police station while we were still busy in worship, and submitted a report that Christians had beaten him. The next day, we submitted a report, stating that Rashid had disrupted our religious gathering and that all the participants were ready to testify to this.

“The police officer suggested we take the matter to the newly elected chairman of the union council, so we went there. While we were there, about 30 to 40 men, armed with clubs and axes, surrounded our houses. They called us names and demanded the Christians come out, but they locked themselves in and informed the emergency police. The 30 men did not disperse until the police arrived.

“A few months back, a Christian woman was raped by two men – Tayyab Ali and Faisal Hussain – in the village. We struggled to get the First Information Report registered – it happened only after they were arrested. So these people bore a grudge against us. Then the people who took possession of the church, and others, joined hands, so that we would be thrown out of the village and our properties confiscated.

“We have submitted two applications: a case against Rashid for disrupting the worship service, and another one for gathering with the intention of harming us. So now Rashid’s father, Arshad Ali, has also filed another application that he was beaten by Christians, who broke his teeth. The doctors have so far rejected the claim, saying he lost his teeth due to old age and not a beating.”

The police have been so far reluctant to register complaints from both sides. The local chief of police, Mian Qadir, told World Watch Monitor there was no religious dimension in the clash.

“There are three to four Christian youths who want to establish their supremacy in the village. These people have beaten Arshad Ali, who is an old man. The Council Chairman is trying to get the two parties to reach a compromise, which doesn’t seem to be taking place so far,” he said.

Intimidating tactics are often used to snatch land and property from Christians in Pakistan. In order to achieve this, popular anti-Christian sentiments are often employed. A report by Pew Research Center counts Pakistan among the top 10 countries where religious hostilities are “very high” and the government has also placed restrictions on religious minorities.

Another Pew report notes that only 16 per cent of Muslims have “a positive opinion about Christians”. Similarly, a report by the United States Commission on International Religious Freedom notes that references to Christians are “inaccurate and offensive” in textbooks. Christian students in Pakistan identified how their faith is “denigrated”, while the majority of public school teachers cited “blasphemy against the Prophet Muhammad as a significant cause of anger towards religious minorities. The killing of Muslims in the Global War on Terror and the use of alcohol were also cited”. Professor Akbar Ahmed notes in the New York Times that “a general anger against the United States has caused large numbers of people to target Christians, whom they associate with America, as scapegoats”.

In the wake of such prejudices, attacks on Christians and their worship places are common, such as the 2012 burning of the St. Paul’s Lutheran Church, which took place after a mob protested following the release of an anti-Islam film, “Innocence of Muslims”, in the United States.