Christians among the thousands of Middle Eastern migrants who have fled to Europe have discovered that a familiar burden has followed them: religious harassment.

Some Christian migrants have been subjected to discrimination, harassment and violence from Muslim migrants with extremist views. One Iranian convert to Christianity was murdered.

The phenomenon has been observed in various locations across Europe, including in the camp of Grande-Synthe in northern France, where Iranian converts have been targeted by migrants from Iraq.

The situation has raised great concerns among local churches, which are now supporting migrants by supplying them with food, clothing, and, in some cases, even shelter.

It all started at the turn of the year, recalls Philippe Dugard, the Pastor of Église Evangélique du Littoral, or EEDL, a church in the neighbouring town of Saint-Pol-sur-Mer, which has spearheaded the relief effort in Grande-Synthe.

“Between November and December, there was a group of Iranians who confessed their belonging to Christ, who started to attend our church. Some were Orthodox, while others said they were Christians but were not truly converted. But we got to know them, and we felt they had a real spiritual thirst,” he said.

“And then one evening [14 December], we were informed that two of them were stabbed and the whereabouts of a third one was unknown. 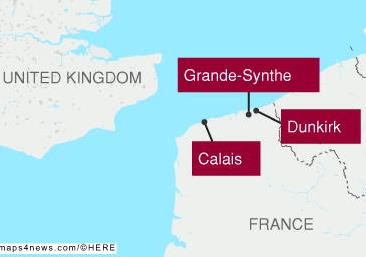 “We then said that as Christians we cannot leave them alone in that situation, and the victims themselves told us that they no longer wanted to stay in the camp, as they felt threatened.”

The incident marked the beginning of EEDL’s support for migrant victims of persecution.

For the next few days, the victims were put up in hotels, before they were moved to a church in Dunkirk, the closest city to the camp.

Just one of the victims from the initial group remains, a 29-year-old who wished to remain anonymous.

“Generally the Kurdish mafia in the camp are against Christians,” he said. “When we gave our money to them for them to help us to go to England, they didn’t help us and they just stole our money and did not give it back. Then they attacked us and called us kafir [infidels] and dirty. They came and cut me with a knife and they beat my friends.”

He said there are still some Christians in the camp, but that many are too scared to speak about their faith.

“Yes, there are still some Christians there in the camp,” he said, “But they don’t prefer to stay there beside these strong Muslims. They are so racist, they just want to clear the camp to be without Christians.”

He added that a mosque has been created in the camp, and that the Call to Prayer resounds around the camp every day, but unlike the nearby Calais camp, there is no church.

Located in the northwest of France, beside the English Channel, the camp of Grande-Synthe hosts around 2,500 to 3,000 migrants – mostly Kurds from Iraq and Syria, but also some Iranians.

Tensions and other forms of violence are common in the camp, said a social worker, who wished to remain anonymous for fear that the report could impact upon his work with the Christians.

Ethnic differences have created tension in the camp between the Iraqis and Iranians, of whom there are only around 50. The thousands of Iraqi Kurds are mostly Muslim, while some of the Iranian minority are Christians.

Some of them attend local churches secretly, because they are scared of the Muslim migrants and smugglers, who hold sway within the camp. Night raids, theft and violence are among the common threats.

On the night of 14 December, a knife attack left several Christians injured. One of them, a 19-year-old named Mohammad, was murdered. The local police were informed and an investigation is underway. Police did not respond to World Watch Monitor requests for information about the investigation.

A staff member at the Mayor’s office in Grande-Synthe said there is no security problem in the camp, which she said is open to external visitors. However, police now patrol the entrance.

On 26 January, a shooting between rival gangs of smugglers erupted, prompting a huge police deployment around the camp. Security checks are now carried out at the entrance of the camp, and visitors must acquire prior authorisation from the Mayor’s office.

There are some who fear members of the so-called Islamic State may be among the migrants, intent on radicalising other migrants and imposing Sharia inside the camp.

Two months after the attacks against the Iranian migrants, the tension has settled, according to Dugard.

The majority of the victims of the December attacks have moved on. Some managed to reach England, their preferred destination, while others, tired of waiting for a hypothetical crossing or because of a lack of financial resources, returned to Iran. Others have left for other European destinations, with the hope of reaching England another way.

“Sometimes they just won’t show up at dinner time, even though we have already laid the table,” said Dugard. “They are always in search of new routes because the passages via Calais and Dunkirk seem completely blocked.

“But in the meantime, other refugees, including moderate Muslims who heard about the support provided to the Iranians, have now arrived.”

“The living conditions in the camp are deplorable,” he said. “It is no place for humans. It is very cold and people fall sick easily.”

Local churches are struggling to cope with the demands being placed upon them, as they seek to support migrants of all faiths and none.

What started as an emergency has become a long-term commitment, Dugard said.

“We are wondering: what is the best option for us? Do we have the spiritual, human and financial resources to continue this work, which is full-time social work?” he said.

“Yet the migrants are really suffering. They crossed a multitude of borders and faced various obstacles to get here, in the hope of a better life. But they realise that it is often hopeless to cross to England and have ended up living in precarious conditions often more difficult than in their countries.”

Those conditions could be improved if migrants exploring Christianity could do so safely, said Michel Varton, director of Open Doors France, part of a worldwide charity that supports Christians who live under threat because of their faith.

“Many Christians amongst the refugees are fleeing persecution and discrimination. They are already traumatised by their terrible experience in the Middle East,” Varton said. “Imagine their despair to realise that, once here in France, they are suffering the same discrimination and hate from fellow immigrants.

“The local churches have shown dedication to help the Christian refugees and those who are genuinely interested in the Christian faith. The authorities must allow them to have simple buildings where they can meet and worship God in security and make sure that values of freedom of belief reign in the camps. It’s totally unacceptable that someone could lose their life for their faith once in France.”

In addition to the lack of resources, there is a logistical problem, as different churches act without much coordination.

Moreover, various groups and associations from all over Europe are also providing assistance to migrants, which has only added to the pressure, said Dugard.

“If some groups are useful, others believe that they can save the world,” he said. “They often come with very aggressive speeches, for two to three days, and then leave. In the end, their actions are doing more harm than good, because after they leave it becomes difficult for us to do serious work.”

Talks are currently underway among churches, as they seek to create a regional platform, which would come underneath the umbrella of the Conseil National des Evangéliques de France, the national Evangelical Church network.

The Grande-Synthe camp stretches over 20 hectares (nearly 50 acres) of marshland. It is difficult to walk through the slippery mud without proper boots.

With thousands of people, including women and children, living in such unsanitary conditions, respiratory problems and infectious diseases are common, says Médecins Sans Frontières (Doctors Without Borders), which provides emergency care alongside Médecins du Monde (Doctors of the World).

According to MSF, a new camp, equipped with heated tents and located three kilometres from the current camp, will accommodate migrants in the coming days.

However, the migrant crisis remains a very complex issue, says Matthew Bosiger, the pastor of the Salvation Army Church in Dunkirk.

“They are a bit like in a prison,” he said. “It is good to try to improve their situation, but they have no plan to stay in France. The migrants have only one thought in mind: to cross the channel to England, at any cost.”

Many say they have relatives or friends already settled there and the living conditions seem very attractive – partly because many know a little English, but also because of the prospect of better economic opportunities. Smugglers take advantage of migrants’ desperation to reach the UK by charging them everything that they have, with no guarantee they will succeed.