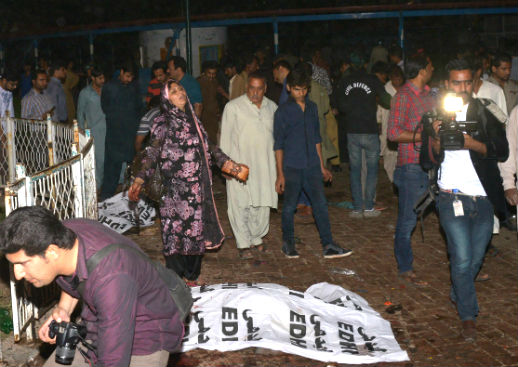 The aftermath of a
bomb blast in the middle of a popular Lahore amusement park packed with people on Easter Day.Abid Nawaz for World Watch Monitor

Parvaiz Masih didn’t know his son was among the hundreds injured in the Easter bombing of a crowded park in Pakistan until the boy had arrived at the hospital.

“I don’t know when Waqar left and went to the park with friends,” said the 16-year-old boy’s father. Hundreds of people, including many Christians, were at Gulshan-e-Iqbal Park, the largest in Lahore, enjoying the warm Easter weather.

A bomb explosion killed scores of people on the spot. Hundreds more were taken to hospitals.

“After he got injured he was taken up to Sheikh Zahid Hospital, from where he was shifted to the Mayo Hospital, but he succumbed to his injuries,” Masih told World Watch Monitor.

“Waqar was a Class-9 student at St. John’s School, Youhanabad,” the father said. “He dreamt of growing up and serving his country and the community.”

The bomb killed at least 74 people and injured more than 300 – although by Tuesday 29 March, the BBC reported that only about 60 of the critically injured remained in-patients.

When you have seen death – you have seen children fly into the air whole, and fall back on the earth in slivers and pieces – what have you got to fear?

Almost exactly a year ago, on 15 March 2015, however, suicide bombers struck Masih’s Christ Church in the Youhanabad sector of Lahore, and almost simultaneously, a nearby Catholic church, killing 14 people in total. The death toll would have been much higher if church volunteers on ‘security duty’ had not acted quickly to defend worshipers. And in 2013, a suicide bomber blew himself up outside a 130-year-old church in Peshawar after Sunday Mass, killing 78. Police have arrested suspects, but there has been no movement in their cases.

A splinter group of the Taliban, Jamaat-ul-Ahrar, claimed responsibility for the 27 March attack and said “it had targeted Christians celebrating Easter.” Prime Minister Mian Nawaz Sharif visited the injured in hospital, while the Chief Minister of the Punjab, Mian Shahbaz Sharif, announced three days of mourning.

Christians make up just 2 per cent of overwhelmingly Muslim Pakistan. They are somewhat more prevalent in Lahore, which has about 10 million people, about 5 per cent of whom are Christian.

Punjab Assembly member Mary Gill said security around churches was very high in the city, which is why terrorists targeted the park. 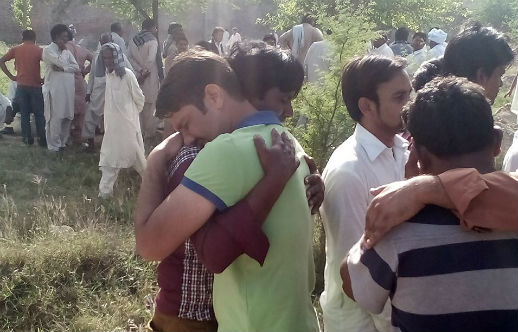 Mourners offer comfort
to one another 28 March at the funerals for victims of the attack.World Watch Monitor

“They were looking at their children when the suicide bomber ripped through the crowd and blew himself up,” Suba said.

Their funeral, he said, was attended by parliamentarians, including Punjab Assembly member Shunila Ruth; Ports and Shipping Minister Senator Kamran Michael; and the Anglican Bishop of Raiwind, Azad Marshall.

One mourner reflected: “When you have seen death – you have seen children fly into the air whole, and fall back on the earth in slivers and pieces – what have you got to fear? Something fills you with the knowledge that if you lived through that, you will live through anything God wants you to.  And will die from anything God wants to use to take you. I don’t know why God gave me life. I would rather die. I am not afraid, just desperately confused.”

“People tried to move away a little boy curled up by the coffin, and to tell him to let them put it in the ground. People were spent from tears and crying, and yet found some energy to dig the graves of their loved ones. The little boy would not let go and wept. I asked the family to let him hold the coffin a little more, and then he looked at me, and we locked eyes before he said, ‘He was my brother after all’.”

Directly after the Lahore suicide blast, army chief Raheel Sharif ordered intelligence agencies to track down those responsible. “We must bring the killers of our innocent brothers, sisters and children to justice and will never allow these savage inhumans (sic) to overrun our life and liberty,” Sharif was quoted as saying by the Pakistan satellite news channel, Samaa.

In the subsequent 48 hours, at least 5,221 suspects were arrested, Pakistan Today reported. A long-awaited crackdown on banned organisations in the Punjab has begun. Security agencies identified the suicide bomber as a man named Yousuf, and arrested his brothers in southern Punjab.

As the country reeled from the Easter massacre, the Pakistan Army was dispatched the same day to the capital, Islamabad, to stop the advance of more than a thousand protesters into the diplomatic sector of the city, the so-called ‘red zone’. The protests continued into Wednesday 30 March in support of Mumtaz Qadri, who was executed on 29 Feb. for killing the Governor of Punjab, Salmaan Taseer. Qadri had defended his 2011 assassination on the grounds that Taseer had advocated reforms in Pakistan’s anti-blasphemy law, and that Taseer supported the release of Aasiya Noreen (more commonly known as “Asia Bibi”), a Christian woman condemned to death for blasphemy.

The protesters beat police and burned vehicles and buildings.

They presented a 10-point demand which included: “the unconditional release of all Sunni clerics and leaders booked on various charges, including terrorism and murder; the recognition of Mumtaz Qadri as a martyr and the conversion of his Adiala Jail cell into a national heritage site; assurances that the blasphemy laws will not be amended …and the execution of blasphemy accused Asia Bibi.”

The Pakistani authorities gave several deadlines for the protesters to disperse, but each expired in turn over four days. “We don’t want any violence, but we can’t tolerate it anymore,” Interior Minister Chaudhry Nisar Ali Khan told the protesters late on Tuesday. Talks continued to break the deadlock, until protesters finally dispersed late in the day 30 March, with leaders saying their demands had been met, although the government in turn said it had made no concessions.

Various sources confirmed the death of the following Christians: