Memorial events were held in Kenya on Saturday (2 April), as Kenyans marked the anniversary of the day Al-Shabaab militants stormed the University campus in Garissa – in Kenya’s volatile east, near the Somalia border – and slaughtered 147* mostly Christian students.

A tree-planting ceremony and procession took place at its parent campus, Moi University in Eldoret, in W. Kenya, where Garissa students were moved while the University was closed (it re-opened in January). Meanwhile, in Garissa, around 100 people participated in a marathon.

Ali Awdoll, one of the marathon organisers, told the BBC: “As we try to mourn the innocent lives, it’s like it happened yesterday. The images of the dead bodies keep on playing in my mind. It was really a traumatising experience.” He said the runners were participating as “a gesture of the peace and humanity that we lost … There is no ‘we’ and ‘they’ in this whole thing; we are humanity and we all have one common enemy – the terrorists are our common enemy.”

Garissa Township MP, Aden Duale, told the BBC: “Together as a country, from the north to the south, to the west to east, from the Muslims to Christians … together we must fight all forms of terror.”

He told local media, “We will stand united and as Kenyans we will not allow the pen to be replaced by the bullet, we are here one year later to tell the nation and the whole world that what is happening in Brussels [and] Istanbul can only be defeated when we come together globally.”

In Eldoret, mourners carried placards that read: “The death of a student, any student, is a big loss and detriment to that family’s dream. #147notjustanumber.” Some chanted, “We want peace! 147 is not just a number! Forever in our hearts!”

During the tree-planting ceremony, one survivor, Everlyne, planted a tree despite the fact that she is still recovering from her injuries sustained during the attack and moves around with the help of a crutch.

At midday, one young lady, named Purity, said: “This time last year I was eight month pregnant and lying under a bed, not daring to move and begging God to save my baby. He did! Though I lay on my belly under the bed for 12 hours, my son survived. I named him Kiama [Miracle].”

Vice Chancellor Richard K. Mibei said: “Today marks one year since we lost our friends, colleagues, children to terror … To all who suffered that day, you are in our hearts, minds and prayers. Let us remember that human life is a gift and our collective responsibility. Today we pay our respects to the innocent victims and make it known that we need both peace and justice in the face of such brutal attacks. We applaud those who undertook acts of heroism, compassion and care to help our children, even at personal risk … Although we have suffered, we are not defeated or discouraged from forging ahead to fulfil our personal and University vision.”

The lighting of the candles was particularly emotional. One young lady, Margie, broke into deep gut-wrenching sobs. She collapsed and had to be carried outside. After she had recovered, she explained that she lost two very dear friends in the attack.

“God showed me that indeed [they] went into eternal safety with Him in heaven … But I am sad because they left me here, alone,” she said.

Former CU vice-chairman, James Kazungu, explained: “Lighting the candles is our show of love towards our heroes of faith as we reflect back on what happened. We also light the candles to acknowledge the sovereignty of God – He is our light.”

A Garissa pastor, Boniface O. Odhiambo, told the gathering, “It is always hard to accept the will of God when something terrible and bigger occurs in our lives. Know this: God will remain God in every situation.”

“You never said goodbye, you were gone before I knew it … If love alone would have saved you, you never would have died,” said one survivor, named Victor.

Tomorrow (2 April) will mark one year since a handful of Al-Shabaab militants stormed the University campus in Garissa – in Kenya’s volatile east, near the Somalia border – and slaughtered 147* mostly Christian students.

The attackers arrived early in the morning, cornered students at morning prayers, killed them and then roved through the dorms to separate Christians from the remaining students and kill them. A sniper waited outside to kill those who tried to flee. The siege lasted 15 hours.

After one woman was shot in the head, her blood traced the outlines of her body onto the floor. The imprint refuses to wash off, symbolically showing that the effects of attacks such as this cannot simply be washed away.

After the attack, World Watch Monitor heard from Frederick Gitonga, the 21-year-old Chairman of the University’s Christian Union. Here he speaks about the impact of last year’s attacks. Also interviewed is a local church leader.

One year on, outsiders still wonder how an attack like that was even possible. But attacks on soft targets like the University students have become endemic in Kenya, particularly in the Muslim-dominated north-eastern and coastal regions.

In a bid to curb attacks, additional police posts have been established in the Garissa University compound and inside the forest that borders Somalia. 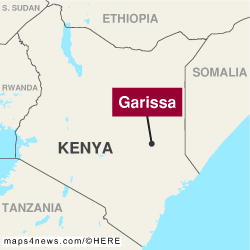 Kenyan authorities have also started to build a 700km-long wall along the Kenya-Somalia border to keep the Somali-based militants out. But many feel that controversial and expensive move will not succeed in limiting attacks, as Al-Shabaab is already inside Kenya, as the President himself admitted two days after the attack.

He acknowledged then that “the planners and financiers” of the attack were “deeply embedded” in Kenyan communities. “Radicalisation,” he said, “occurs in the full glare of day, in madrasas, in homes, and in mosques with rogue imams.”

The Garissa campus was re-opened on 4 January, 2016, nine months after the attack.

On Saturday (2 April), memorial events in Garissa will include a marathon with at least 1,000 participants, in a show of solidarity with the people of Garissa.

In Eldoret in western Kenya, at Moi University (a parent campus for the Garissa branch to which students moved to continue studies after the April closure), surviving Christian Union students and leaders plan a big programme, including tree-planting, a procession, candle-lighting, prayers, and speeches from, amongst others, the leaders of the Fellowship of Christian Union Students (FOCUS) – Kenya.

*One student, Risper Mutisya, was still being sought by her father in July 2015.