Why is the Middle East the way it is? There are many ways to approach answering this question. The book ‘Identity Crisis’ by Jonathan Andrews, a former researcher for Middle East Concern, a group of Christian charities which all work across the region, provides “a unique and timely perspective on one significant factor”, of which many outside the region are ignorant. It’s the system prevalent across the Middle East that identifies every human being as an adherent of a particular religion. 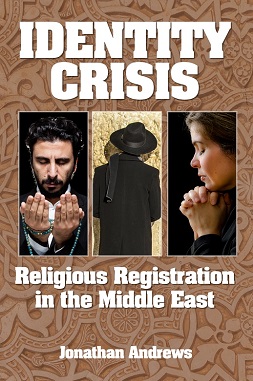 This system – religious registration – treats every person within the legal system as an adherent of a particular religion. This allocation might be generic, such as Christian, or very specific, such as Roman Catholic, Syrian Orthodox or Anglican. Changing that registration is problematic everywhere. In most places in the Middle East, it is a one-way street – to Islam only – and in those places where to become a Christian is legally permitted, there are social and cultural restrictions.

As the founder of Open Doors International (which works with persecuted Christians around the world), a Dutch man known as Brother Andrew, says: “Sometimes the persecutor is a person. Sometimes the persecutor is a system. This book not only shows the brutal side of persecution, but how subtle and yet how fierce are the myriad pressures on Christians from a Muslim background in the Middle East today”.

A Middle Eastern church leader commented “the system is used by Muslims to determine who should get the benefits of being part of the majority, and by some Church leaders to identify Christians.

However, we’re only too aware of the problems it causes for those from Muslim backgrounds who then choose to follow Jesus. So, we cannot simply say ‘do away with the system,’ but we need a solution for those who choose to become Christ’s followers.”

Historically, what we see today is a continuation – with some subtle tweaks – of the Ottoman Empire’s Millet System (from the Arabic ‘millah’ meaning ‘nation in the sense of a distinct community of people sharing language, culture and religion). However, the Millet System pre-dates the Ottoman Empire and indeed the rise of Islam. Its history can be traced to the fourth century; its earliest recorded use was when it was applied to the communities of the Church of the East under the Sassanid Persian Empire. (This empire at its zenith included much of the Middle East and those parts of the Arabian Peninsula along the Gulf and Indian Ocean coasts, and its state religion was Zoroastrianism). The Christians formed the Church of the East, whose leader was responsible to the Persian king for the Christians within the Empire. The intention then was to facilitate use of Christian rites of passage such as marriage, whilst affirming the loyalty of the Christian communities to their political rulers.

This system of maintaining Christians as a protected religious community continued after the Islamic conquest of the Sassanids in 651 AD; the Christian community flourished and sent people to China and India. Later, Ottoman law did not recognise ethnicity or citizenship; Millets were defined solely by religion.

What effect does this system have on Christians across the Middle East today and why is it significant?

The book responds to the ‘religious registration’ issue by using human interest stories to show the range of challenges faced by Muslims who become followers of Jesus Christ. In summary, these typically occur with marriage, children’s education, burial and inheritance.

Case studies also illustrate why many Church leaders embrace the system, despite problems caused to some officially recognised as Christian. In essence, religious registration lies at the root of why Christians are treated as second class citizens in much of the Middle East.

Mohamed Hegazy might be a typical victim of the registration system having spent most of his adult life harassed, in hiding or in jail. He is known to be the first Egyptian to openly seek a change from Muslim to Christian on his ID card.

The book also looks at the effects on society as a whole, arguing that segregation on religious lines underpins discrimination, undermines the clear rule of law applied equally to all and that it fuels violence. Note the careful language here; it rarely causes violence but where violence occurs, then it exacerbates and intensifies it. Consequently, the religious registration system hinders meeting the aspirations expressed in the Arab Awakening from 2011 onwards. To use the religious and harsher metaphor, it is more of a curse than a blessing.

Why is the Middle East the way it is? One reason is the profound and widely felt effects of religious registration. For the Middle East to flourish, authentic local solutions need to be implemented. Embracing diversity – including religious diversity – as crucial to creative and vibrant social, economic and political activity is essential. The majority, however understood, needs to stop exploiting the minorities. Religious freedom for all needs to become accepted as for the benefit of everyone.

As Brother Andrew comments: “‘Set my people free’ is what Moses thundered to the Egyptian overlords. [This] delivers the same call, with precision and love. This sane analysis and overview is greatly needed for all God’s people to flourish in the Middle East today.”

‘Identity Crisis – Religious Registration in the Middle East’ by Jonathan Andrews is available at www.GileadBooksPublishing.com/identity-crisis