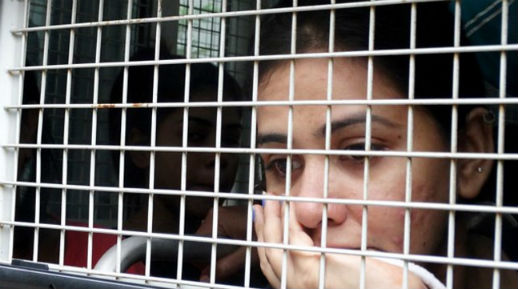 Pakistani Christians in a Thai detention facility, in an image taken from a BBC documentary.BBC

Last month, World Watch Monitor reported that there are about 11,500 Pakistanis seeking asylum in Thailand, a 51 per cent increase from the previous year; all are classified as Christians in a recent report to the UK Parliament.

Many of them have been hiding from the Thai police for several years because, in Thailand, every asylum seeker – once their brief tourist visa expires – is guilty of illegal immigration and liable to face prosecution. (Thailand is not a signatory to the 1951 Refugee Convention or its 1967 Protocol and does not have a formal national asylum framework.)

Many Pakistani Christians have spent time in Immigration Detention Centres (IDC) for overstaying. 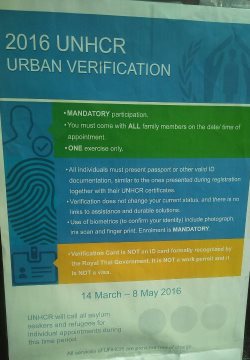 Following the publicity, the UN High Commissioner for Refugees (UNHCR) in Thailand has begun issuing verification cards to asylum seekers, a temporary arrangement informally recognised by the Thai government.

Despite being provided with verification cards, many of these asylum seekers stayed vigilant through the night of 20 March, the rumoured deadline for a rumoured crackdown on “illegals”, ahead of their proposed deportation back to Pakistan.

Victoria, a Pakistani Christian scared to reveal her full identity, told World Watch Monitor that she had told her children not to go out that day.

“I received the card before the expected 20 March crackdown, but I still remained vigilant because I never knew what would unfold,” she said. “I stayed awake all night and looked outside from the top of the apartment, where we are living.”

Victoria, whose children contracted scabies a year ago, while fleeing the police, said, “All night we keep watch on the cars that stop down the road and, if we notice anything unusual, we move early in the morning; our belongings are always packed and we are ready to quickly move to another place if there is any perceived danger.”

Another Pakistani Christian, Francis Sodagar, said the UNHCR has given verification cards and appointments to all registered asylum seekers.

“The crackdown was meant to deport those living without asylum-seeker status,” he said. “Now we will be safe from police raids and will be at peace after such a long time.”

The verification cards read as follows:

“The card-holder is a person of concern to the UNHCR, registered and documented pursuant to its UN General Assembly Mandate, and should not be involuntarily returned to his/her country of origin. Any assistance accorded to the card-holder is most appreciated.”

“We still cannot work here, as issuance of this card doesn’t mean we can be legally employed, but now fear of the detention centre and deportation is over,” said Victoria.

‘My name is Bridget John’

They murdered her husband, then tortured her. She fled Pakistan for asylum in Britain. The UK wants to send her back.

In February, members of the British Parliament urged their government to adopt a harsher official assessment of Pakistan’s treatment of Christians. The MPs said UN officials in Thailand were not sufficiently concerned that Christians “face a real risk of persecution” if returned to their home country, the officials quoting Britain’s current, less-than-urgent assessment of Pakistan as partial justification.

As a result, the UK MPs said, the already-overwhelmed UN bureaucracy was prolonging the asylum process and too casually deporting Christians. Meanwhile, Christians have been languishing for years in jobless isolation, dependent on charity and trying to avoid arrest on charges of illegal immigration.

“The official line of the UK Government is that there is no persecution; the reality is the opposite of that and our report dispenses with that illusion,” said Lord David Alton.

Christians make up just 2 per cent of overwhelmingly Muslim Pakistan. Thousands of Christians have fled in the past few years, citing a rise in persecution.

The most recent incident took place on Easter Day, when 74 people were killed in a suicide blast targeting Christians in an amusement park in Lahore.

A splinter group of the Taliban, Jamaat-ul-Ahrar, claimed responsibility for the 27 March attack and said “it had targeted Christians celebrating Easter.”

Punjab Assembly member Mary Gill said security around churches was very high in the city, which is why terrorists targeted the park.

A year before, on 15 March, 2015, another suicide attack on two churches in Lahore killed 14 people. The death toll would have been much higher if church volunteers on “security duty” had not acted quickly to defend worshipers. And in 2013, a suicide bomber blew himself up outside a 130-year-old church in Peshawar after Sunday Mass, killing 78.

But the first spike in Pakistani Christians seeking asylum in Thailand came in 2009, after over 100 Christian homes were set ablaze in the city of Gojra.