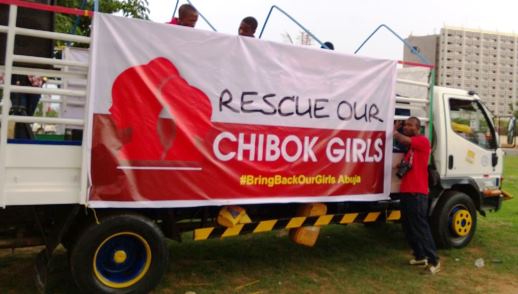 The #BringBackOurGirls campaign to raise awareness of the kidnappings is launched in Nigeria, 2014World Watch Monitor

Today (14 April) marks two years since the abduction of more than 200 girls from Chibok Secondary School in northern Nigeria’s Borno State. A video now released by the radical Islamist group, Boko Haram, apparently timed for this anniversary, appears to show some of the kidnapped girls.

The 54 minutes of footage, apparently filmed on Christmas Day 2015 and broadcast on CNN – amongst other outlets – shows some of the girls pleading with the Nigerian government to co-operate with the militants for their release. The girls said they were being treated well but wanted to be with their families.

Some of the parents who attended a screening of the video in Maiduguri, the capital of Borno, where Boko Haram has been strongest, identified some of the girls. Two mothers, Rifkatu Ayuba and Mary Ishaya, said they recognised their daughters in the video, while a third mother, Yana Galang, identified five of the missing girls, Reuters reported. One mother said her daughter looked well, much better than she had feared, giving some hope to the families.

It is the first potential evidence that the girls may be alive since May 2014. For the past 730 days, their parents had not heard any concrete news.

Enoch Mark, whose daughter and stepdaughter are missing, said: “If I could talk to them, I would say, ‘Call upon the name of the Lord … and be patient’. As long as they’re living, there will be a time when they may be free.”

In a video (below) filmed a few weeks ago for Open Doors International, a global charity which, in partnership with Nigerian churches, has facilitated trauma counselling for the Chibok families, three fathers spoke about their loss.

There have been many rumours – forced marriage with Boko Haram fighters, drugged girls becoming suicide bombers, and even that sightings were ignored by government forces – but none have offered any hope of returning the girls to their parents.

Women rescued from Boko Haram camps claim to have seen the girls. According to their testimonies, some became Muslim fighters and others were segregated and treated well for potential use in any bargaining.

Parents have found it hard that the Nigerian government have communicated little of the continued search, or what it says have been ongoing negotiations with Boko Haram to secure the girls’ release.

The parents have been under a lot of strain: at least 18 of them have died of stress-related illness, three others have themselves been killed by militants; many others have persistent health problems brought on by stress.

Last Sunday (10 April) the government denied media reports that the militant group was demanding ransoms before releasing the girls. But according a Nigerian academic, Dapo Oyewole, the Director of the Policy Development Network and a former adviser to the Nigerian government, the video was sent as “proof of life” and, he says, seems to be part of negotiations for an eventual release of the girls.

The kidnap of the 275 school girls at one time is the largest single group of young women kidnapped in northern Nigeria, but there have been numerous others. A report detailing such treatment of minority Christians since 1999 is part of the evidence being presented to the International Criminal Court in The Hague to examine whether Boko Haram’s abduction of Christian children may constitute genocide, as the “forcible transfer of children”. The vast majority of girls in the school were Christian.

“Our Bodies, their battleground” has been quoted extensively in Human Rights Watch’s submission to Chief Prosecutor Fatou Bensouda.

Nigeria and the world remembers

Today, hundreds of people are marching notably in the Nigerian capital, Abuja, to demand that the government do more to secure the release of the girls, while in Chibok collective prayers will be said in front of the remaining walls of their secondary school.

Their disappearance eventually generated headlines around the world and fuelled a social-media storm with the hashtag #bringbackourgirls. Joining the campaign were public figures such as American First Lady Michelle Obama and Nobel Peace Prize winner Malala Yousafzai, the Pakistani schoolgirl who survived a 2012 assassination attempt by the Taliban.

Political leaders, such as Gordon Brown, the former UK Prime Minister and now a UN Education Envoy, also raised their voices. Last year, during a visit to Abuja, Brown launched a “safe schools initiative” aimed at providing security for around 500 schools in northern Nigeria. Ahead of the first anniversary of the kidnapping, he said “the fight to bring back our girls must continue”.

Fears that the some of the Chibok girls are being strapped with explosives and used in suicide bombings have been given credibility by Beyond Chibok, a new UN report timed to coincide with the second anniversary of the kidnappings.

The report claims that the number of children used in suicide attacks in 2015 is 11 times greater than in 2014 for northeast Nigeria and neighbouring countries – the area where Boko Haram has been active over the last two years. Between January 2104 and February 2016, it says that one in five of all suicide bombers were children; three quarters of the estimated 44 child suicide bombers during that period were girls.

The parents’ disappointment with the government began the day after the abduction, when they pursued the kidnappers as they fled from Chibok. The head of a village near the Sambisa Forest – a vast, former game reserve in north-eastern Nigeria, which became a stronghold of Boko Haram forces – assured them that fighters had passed through his village with the girls and that they would be sheltering in the forest. But he warned them off because of Boko Haram’s heavy weaponry and told them to inform government forces.

Yakubu Nkiki Maina, the chairman of the Chibok Abducted School Girls’ Parents’ Association, who was with the group, said the government’s response disappointed the parents because it seemed to lack the required urgency.

“They said they will make arrangements to go and rescue the girls … The outgoing President promised us that they know the whereabouts of these girls, that they would soon bring them back to us alive,” he said.

Talk of their rescue culminated with the involvement of Stephen Davis, an Australian peace negotiator who made contact with Boko Haram, but when talks collapsed he said powerful figures within Nigerian politics with “vested interests” were sabotaging his efforts to reach a deal.