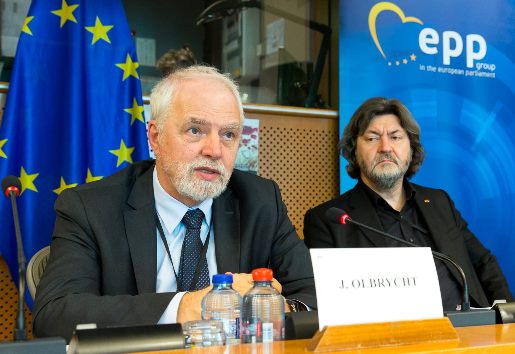 Jan Olbrycht MEP,
co-chairman of the European People’s Party Working Group on Inter-religious Dialogue, and Joachim Zeller MEP, at the 3 May event.African Diaspora for Freedom of Religion

A conference on religious radicalisation, Boko Haram and terrorism in Nigeria was held by the largest group in the European Parliament last week.

The European People’s Party Working Group on Inter-religious Dialogue’s conference on 3 May had two sessions: the first on the broader situation of Nigeria and the other on the threats and needs for peace and security in the region.

German MEP Joachim Zeller, who hosted the conference, said that even though the “Nigerian election and peaceful transition of power was a major achievement”, there is still a major threat in the north, where Christians and other minorities are being persecuted.

Each session had a panel with interventions of advocacy and civil society groups and experts on Boko Haram and Nigeria, including Esther Kattenberg, Advocacy Officer for Open Doors International, a charity that supports Christians around the world who are pressured because of their faith. She explained that the reports that appear in the media are “only the tip of the iceberg”, as “many violations go unreported”.

“It’s important to remark that not only Christians are suffering,” said Jane Ura, co-ordinator of the Africa Diaspora for Freedom of Religion, introducing the first panel. “There are also challenges for people with indigenous beliefs, and Muslims.”

Missing for nearly three years and presumed killled by Boko Haram, a father is discovered after hiding in caves.

Professor Yusuf Turaki, chair of the Christian Association of Nigeria’s editorial committee for its recent declaration, ‘Nigeria Renew’, said most violence in Nigeria is “rooted in the British colonial social-economic structure”, as well as the lack of will of Nigeria’s political elite to change it and to “build an integrative society”. He said the British administration used conscripted soldiers from the two Islamic empires in the north to defeat the rest of the ethnic groups in the south.

Later, the number of Christians in northern Nigeria, where the former Islamic states existed, increased from 0 to 31%. He said the conflict is religious and economic.

“Boko Haram acts in a similar way to the Kanem-Bornu Empire of 1900,” Turaki said. “Their descendants are still the rulers of the area.”

Arne Mulders, ODI’s Research and Communications Manager for West and Central Africa and author of the report, ‘Crushed but not defeated, the impact of persistent violence on the Church in northern Nigeria’, said Nigeria suffered from the “religion and politics of a dominant class which wants to stay in power”.

Nigeria is complex because there are several perpetrators that use organised violence and are interlinked. Some conflicts are over land issues, but there is also a religious factor.

“There are ethno-politic and economic reasons, but the common denominator is religious,” said Mulders.

Nigerian pastor George Odafe talked about the links between Boko Haram and Fulani herdsmen, who attack farmers in the Middle Belt of Nigeria. He also warned about the dangers of famine and economic losses on exports, saying Fulani herdsmen are constantly destroying crops.

African Diaspora for Freedom of Religion

The ODI speakers presented their report on Nigeria, with a series of recommendations for the EU to put “pressure on Nigeria for equality before the law and to bring perpetrators to justice”.

The EU is a major donor to Nigeria, but “people are missing out on aid”, said ODI’s Kattenberg.

“Nigeria is an easy partner,” said Marcela Szymanski from Aid to the Church in Need, suggesting that although the government is not perpetrating the violent acts, it is doing little to prevent them. Therefore, Szymanski suggested, the EU “should rather give the money to civil society, which is acting on the ground”.

Mark Barkwick, from Human Rights Without Frontiers, talked about long-term solutions focusing on the factors that bring religious extremism, such as structural grievances.

“We need a strategy for counter-narratives, and the authorities should create political dialogue with certain factions of Boko Haram,” he said. “We are often too focused on security campaigns, but they often end up in abuses.”

Rev. Odafe, who works in the Archdiocese of Kaduna in northern Nigeria, said “pro-activity is needed”, especially when dealing with victims. “The average Nigerian comes for counselling to the pastor, but we are not psychologists,” he said.

He shared his personal testimony of running from a group of teenagers with machetes and hiding in a house in ruins. He said he saw the young men stopping a pregnant woman coming back from the market, ripping her womb open, taking out the foetus and placing it into her hands.

“I fainted,” he said, “and this is the kind of violence we have every day, even from teenagers.”

Temitope Olodo, an anti-terrorism expert, said many children want to join Boko Haram because “they are strong”, while “most of the jobless join terrorist groups”.

An Open Doors team tours the largely Christian village of Agatu, attacked by Fulani militants in February. One of the investigators says: “I’ve never seen such a level of destruction.” [Read the team’s report here.]