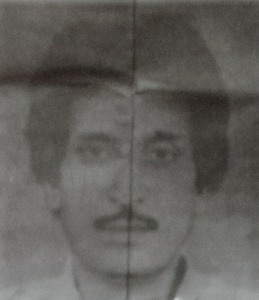 Pastor Fazal Masih, who died 20 years ago, was hailed as a ‘prophet’ on a flyer inviting Christians to a memorial ceremony.World Watch Monitor

Five Pakistani Christians charged with blasphemy last year in the religiously conservative city of Gujrat have been acquitted, but two others have been jailed.

Shafqat Gill, Latif Masih, Younatan Fazal Gill, Mohsin Shoukat and a fifth Christian identified by “Christians in Pakistan” only as “Zulfiqar” were released; Aftab Gill, a pastor, and Hajaj Bin Yousaf were jailed for six years.

The other Christians arrested in August 2015 were never brought to trial.

Pakistani police have charged 15 Christians with blasphemy in the religiously conservative city of Gujrat for publishing a flyer that described a Christian pastor, who died 20 years ago, as one “who was given the title of an apostle”.

(The word “apostle” is translated in the Urdu Bible as “rasool”. Although the title “prophet” is usually translated into Urdu by the Arabic-root “nabi”, “rasool” can also carry the same meaning.)

The claim of “apostleship” or “prophet-hood” is perceived as an open insult and challenge to the prophet of Islam, Muhammad. Muslims believe he is Allah’s last and final apostle and prophet, after whom prophecy ceased. Therefore any countering claim is considered blasphemous and, according to Pakistan’s blasphemy law, may be punishable with death.

The Catholic news agency, Fides, reported that during the recent Ramadan, in early July, Prime Minister Nawaz Sharif approved a summary prohibiting the English translation of Islamic terms. Sacred Arabic names and words like “Allah”, “masjid”, “sala’at” and “rasool”, it reported, “are now forbidden to be translated into English as ‘God’, ‘mosque’, ‘prayer’ and ‘prophet’… The Prime Minister’s announcement came a day before the anniversary of the coup of General Zia ul Haq in 1977, when a number of laws were issued to Islamize the country”.

In Gujrat, which is in the Punjab region, the flyer, an invitation to Christians to participate in a memorial ceremony on 16 August to commemorate the late Pastor Fazal Masih, carried pictures of 15 office-bearers of the “Biblical Church of God”, a small, little-known Protestant group working in Gujrat.

A Pakistani commentator explained to World Watch Monitor: “The flyer’s language looks like it’s been copied from the Internet. It’s language that may be more acceptable in countries where Christianity has more freedom. It suggests that the late pastor practised the gifts of the Holy Spirit and had a prophetic gift. However this is a concept that does not translate easily in an Islamic context.”

They said Christians had blasphemed the ‘Holy Prophet’ and that they should be punished for it. I told them that anyone who had done wrong should be punished, but why should all of us be treated with contempt?

The flyers were placed across the city in areas where Christians are in a higher number, such as Mughal Colony, where the dead man’s son, Younatan Fazal Gill, lived. He was one of the organizers of the programme.

“There are about 200 households of Christians who have reasonable means of earning, and also have their own houses,” Mukhtar Mughal Khan, a Christian political leader who and former local councillor, told World Watch Monitor.

“Only three days before the announced date of the programme, first a Muslim woman and then Umar Butt, a shopkeeper, noticed that the flyer used the word ‘apostle’ for a Christian.

“There are people who say Umar Butt enquired of Younatan’s brother-in-law, Imran Masih, about the title of ‘apostle’. Imran told him that Christians could use this ‘Biblical’ description, after which the situation escalated.

“On 15 August, it was announced from the loudspeaker of a local mosque that all Muslims should gather to discuss this issue. The police of the Civil Lines were also called in.

“After the meeting, the police searched Christian neighbourhoods and removed all the flyers. And when the organisers of the programme were preparing to gather the next day, the police arrested some of them.”

The police of Civil Lines registered a case (numbered 972/15) under the Anti-Terrorism Act of 2001. This was an unusual move because it did not allow for a local citizen to lodge the application, nor was the case registered under the blasphemy laws of Pakistan.

“The situation became tense, even though there was no untoward incident, so Christians started to leave the area,” said Khan.

A Christian health visitor, Roseanna Masih, told World Watch Monitor that two women living across the street from her started name-calling: “They said Christians had blasphemed the ‘Holy Prophet’ and that they should be punished for it. I told them that anyone who had done wrong should be punished, but why should all of us be treated with contempt?”

“On Friday, 21 August, Christians were expecting that after Friday prayers extremist Muslims would attack their houses, so almost all their women and children were sent away, while only men were left their to guard their houses,” said Khan. He said that there were about 500 houses in the Mughal Colony and about 200 households were of Christians.

Police Officer Tanveer later told World Watch Monitor that the situation was under control and that there was no law and order situation in the area.

“However, the police arrested Pastor Aftab Gill, another son of the deceased pastor, and three others, while Younatan has obtained bail,” said Khan.

This is not the first time Christians have been accused of blasphemy because of Biblical interpretation or translation. Almost exactly a year ago, on 23 Aug in Bahawalpur, about 450 kilometres from Lahore, 60-year-old Naja Masih was sitting outside his home with his neighbour, Shahid Mehmood, discussing similarities between the Bible and the Qur’an, after which Masih was charged and immediately handed to the police.

In his First Information Report (FIR), submitted in the Civil Lines Police Station, Mehmood stated that Masih told him “God himself took human form – God forbid – and appeared to Lot, and told him to leave his village”. Mehmood further alleged that Masih had injured his “religious feelings” by saying that when Lot had fled Sodom along with his daughters, his daughters “intoxicated” him and slept with him to continue their father’s lineage.

In another case, a Christian man named Anwar Kenneth was arrested and charged under the blasphemy law. He claimed he was one of the two promised witnesses to Jesus (interpreted as Elijah and Moses) in the last book of the Bible (Revelation, Chapter 11) but was believed to be mentally ill. However, he was sentenced to death in 2002 and since then his appeal has not been heard by the Supreme Court.