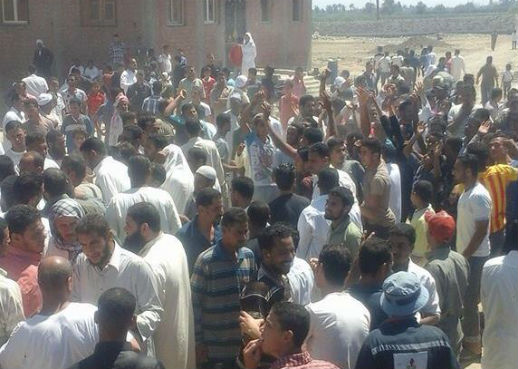 Although the number of casualties may not cross the world-attention threshold, the story of what happened in al-Bayda-1, a settlement outside Alexandria, is indicative of a pattern faced by minority Christians in Egypt when failure of the rule of law and religious prejudice become the order of the day.

On Friday, 17 June, after the Muslim noon prayers, angry worshippers gathered outside the home of Naim Aziz Moussa, after word had spread that the local Christian was turning his house into a ‘church’.

“More than 5,000 people, including young and old, men and women, mobbed my home. They were shouting: ‘One way or another, we’ll bring the church down to the ground’,” he said.

Recent visits by a Coptic priest to Moussa’s home had given locals reason to think a Christian place of worship was springing up in their midst. Apart from housing the family of six on the ground floor, the top two floors of the building were to discreetly serve as a place where Christians could gather, in the absence of any other place in the village they could use. 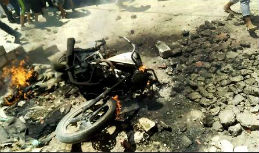 It has often proved legally impossible to issue church building permits in the country, a sore point of contention for Copts. Despite various attempts, the bid to pass legislation to remove various hurdles remains elusive.

Besides the 46-year-old farmer and his family, the village of al-Bayda-1 is home to some 80 Christian households. Situated on the Alexandria-Cairo Desert Road, the slum-like settlement falls within Amreyya, a district of Alexandria that is heavily influenced by fundamentalist Muslim Salafists, who, locals report, make no secret of their disdain for Christians.

The nearest church is over 5 kilometres away in another village – a considerable distance, given poor transport and an area where high-density population means people already live in close quarters.

Moussa, also known as Maurice, had in 2009 donated part of his building to the church.

Some widely circulated media, including Fox News, have reported that 80 homes were torched. However, World Watch Monitor, based on reports from local sources, learnt that at least two homes, including Moussa’s, suffered extensive damages, while 10 Christian homes were looted.

Building material, fittings and fixtures believed to have been gathered to make the “house church” were destroyed.

It’s either us or you, infidels!

“No church will stand here in the village. It’s either us or you, infidels!” Moussa recalled the angry mob as saying.

“The building was ransacked, including our home. My brother’s nearby new flat was also destroyed,” said Moussa, who, together with another of his brothers, was injured in the chaos.

In line with what has become an all too familiar pattern, nearby Christian homes were pelted with stones. “At least five Copts were injured. Women and children were caught in the panic,” Moussa added.

Nearby church priest Fr. Karas was said to have narrowly escaped from the angry crowd, while his car was smashed.

“They were crying out: ‘Islamic! Islamic! We don’t want churches in Amreyya!'” added Moussa. 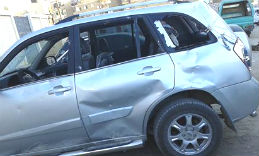 Fr. Karas’s car was smashed during the violence.World Watch Monitor

The police were immediately at the scene, which Moussa said he thought was suspicious.

“It seemed all too convenient that the Amreyya Police Chief and other ranking officers happened to be doing their prayers this Friday at the twin al-Bayda-2 village merely 5 kilometres away,” he said. “As the police arrived at the scene, angry Muslims were shouting, while their women were showing signs of jubilation that the police were there. They were shouting out in support of the police, while at the same time stressing their rejection of the church on Islamic grounds.

“The police chief could see me bleeding from my wounds. I complained to him about what happened to me. He said I deserved this, and more. Meanwhile our attackers carried the chief on their shoulders and cried out in support: ‘People and police are one!'”

According to Sabri Shawki, another local Copt, the police took 19 Christians, himself included, in a van. “I thought they were taking us to the station. But they only whisked us outside the village and left us there,” said Shawki.

“The police did nothing to protect the Christians. Right in their presence, more Christian properties were attacked. Fr. Karas’s car was smashed yet again,” added Moussa, saying a number of the attackers then joined the police chief for evening Muslim prayers right in front of the Christians’ homes, while using loudspeakers.

The police eventually rounded up six Muslims and six Christians, including Moussa. One of the Copts detained, Harvey Fawzi, was an outsider who happened to be at the scene at the wrong time.

According to local sources, the six Muslims were shortly released in time for their evening breaking of the Ramadan fast, while the six Copts were kept for longer. At 10pm that night the Christians were charged with “building without permission” – an anomaly, says Moussa, as every building in the slum village is built without permission.

After midnight the Copts were released on bail after being also charged with “praying without permit”.

“When at the police station, I requested the officer to take me to hospital as my head was bleeding. I was kept till midnight, before being allowed to go to the hospital, where I was stitched,” added Moussa.

Since 17 June, Moussa, together with his heavily pregnant wife, their four children, and his brother’s family, cannot go back home.

“We’re sleeping rough. The security forces are not allowing us to go back home, unless we opt for extrajudicial conciliation,” he said. “The police tell me I can only go home if I agree to reconcile with my opponents.”

Despite pressures to relinquish their legal rights, the Moussas are adamant.

“I stand for justice. We have suffered a lot. If the law means anything, I will have justice first,” says Moussa, who says he is distraught that his attackers sit amicably with policemen right outside the home he cannot now go to.

The Moussas’ wait for justice may be long.

“The Amreyya Police Chief tells me the law won’t help me. He taunts me that my cousin cannot get his land back despite a legal ruling in his favour,” Moussa said, referring to Hamdi Makanoti, whose story World Watch Monitor covered last year.

Building new churches and re-modelling old ones is restricted in Egypt. Still, in numerous cases Christians have set up churches in the basements of their residential buildings, or through establishing NGOs and eventually using their premises for worship.