On 7 July, Russian President Vladimir Putin signed into law a bill referred to by one Christian organisation as an “anti-missionary bill”.

The new law, known more commonly as the “Yarovaya” law (the name of one of its authors), which will come into effect on 20 July, was formally introduced as an “anti-terrorism” measure, allowing the government to monitor extremist groups.

However, its biggest impact may be upon Russia’s Christians, particularly missionaries, who will need a permit, and the so-called “house churches”, which will soon be deemed illegal, as religious activity will only be allowed to take place inside registered buildings, such as churches. Maximum fines amount to the equivalent of $780 for individuals or $15,000 for organisations.

The law is unlikely to affect the Russian Orthodox Church, to which, according to the Christian Post, 70% of Russians (and 90% of ethnic Russians) subscribe, but it will affect all other evangelical groups and denominations, including Protestants (1% of the population), Seventh-day Adventists, the Church of Jesus Christ of Latter-day Saints and Jehovah’s Witnesses.

A summary of reaction from the Church in Russia:

An open letter from the Baptist Council of Churches, saying:

The authors of the bill did not ask for the views of those “who are the most affected by the new amendments.”

The law violates the constitutional right “freely to choose, hold, and disseminate religious and other beliefs.”

“[It will] create conditions for the repression of all Christians … Any person who mentions their religious views or reflections out loud or puts them in writing, without the relevant documents, could be accused of ‘illegal missionary activity’ and subjected to a heavy fine.”

Another letter, signed by, amongst others, Sergei Ryakhovsky, head of the Protestant Churches of Russia, saying:

“The obligation on every believer to have a special permit to spread his or her beliefs, as well as hand out religious literature and material outside of places of worship and used structures is not only absurd and offensive, but also creates the basis for mass persecution of believers for violating these provisions. Soviet history shows us how many people of different faiths have been persecuted for spreading the Word of God. This law brings us back to a shameful past.”

“[It’s] the most draconian anti-religion bill to be proposed in Russia since Nikita Khrushchev promised to eliminate Christianity in the Soviet Union. For years we have watched as huge changes take place in Russia under the increasingly dictatorial rule of President Putin and his administration. Freedom of religion represents a threat to the current political agenda in Russia. Today, few–if any–foreign Christian mission groups have an official presence in Russia, having been pushed out by anti-evangelical regulations.”

“[It’s] the most draconian anti-religion bill to be proposed in Russia since Nikita Khrushchev promised to eliminate Christianity in the Soviet Union. For years we have watched as huge changes take place in Russia under the increasingly dictatorial rule of President Putin and his administration. Freedom of religion represents a threat to the current political agenda in Russia. Today, few–if any–foreign Christian mission groups have an official presence in Russia, having been pushed out by anti-evangelical regulations.”

“I understand from one source that this package of bills was actually drafted in April and it’s been back and forth through a few committees here and there so I’m imagining this has probably been well discussed behind the scenes … It’s been signed into law, now it’s all going to depend on how this gets interpreted down the food chain within the Russian Federation … There are potentially very wide-sweeping ramifications to this law. It just depends on, again, how it is going to be enforced and that is a very huge question mark … Our whole ethos and purpose is to serve the church. And the Russian Union of Evangelical Christians-Baptists is registered with them. And our sole purpose for existence is serving those churches.”

“Baptist churches in Russia will survive … [It] is nothing new to them … [But it] will significantly undercut all of the missionary activities [though it] will not stop [missions and evangelism] altogether.”

“Following a pattern of other human rights abuses, Vladimir Putin’s Russia is criminalising a central duty for all followers of Christ — sharing our faith.”

“[It’s] a flagrant violation of fundamental human rights, of the inalienable right given to every person by their creator to express their religious convictions, and of rights enshrined in the Russian Constitution and international law … Russia has always been a multi-ethnic and multi-religious country that respects the rights and freedoms of every person regardless of his or her religion.

“[This will] put hundreds of thousands of believers from various denominations in a very difficult position … [The controls are] effectively legalizing the invasion of citizens’ privacy by forbidding them from expressing their religious beliefs or meeting their religious needs even at home … [It] forces citizens to join religious communities in order to exercise their inalienable right to freedom of conscience, which is a gross violation of the Russian Constitution and international law.”

“We have never engaged in extremist activity. We hope that the court will correct this injustice.”

A statement on JW.org reads:

“Jehovah’s Witnesses are asking that the court declare the prosecutor’s warning to be unlawful. It constitutes interference in the Witnesses’ religious freedom rights and is based on a deliberate misapplication of Russia’s law on extremist activity.”

Official statement from The Church of Jesus Christ of Latter-day Saints:

“The Church recognizes a new law will take effect in Russia on July 20, 2016 that will have an impact on missionary work. The Church will honor, sustain and obey the law … [and] study and analyze the law and its impact.”

“We work very hard to comply with all of the legal requirements … [Mormons in Russia] are courageous. I am confident they will find ways to share the Gospel and still comply with the requirements of the new law. They are wonderful in their support of missionaries.” 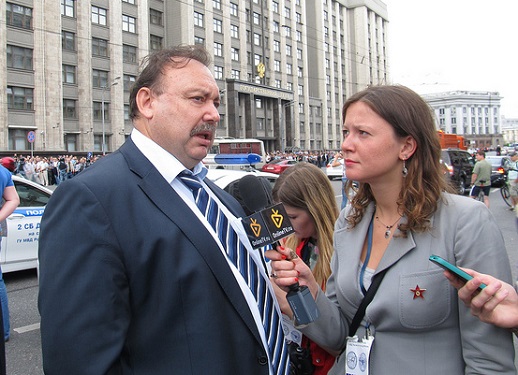 Gennady Gudkov (left), an opposition leader in the Russian parliament, in a 2013 photo.Ilya Schurov / CC / Flickr

Before the bill was passed, Igor Yanshin, a lawyer and member of Siberian Pentecostal church, created an online petition in an attempt to persuade Putin to turn back the bill. After 25,000 people signed the petition in three days, he sent it to Putin on 29 June via the Kremlin website. The petition remains active and reached 37,000 signatures by 4 July, Forum 18 reported.

“These deeply flawed anti-terrorism measures will buttress the Russian government’s war against human rights and religious freedom. They will make it easier for Russian authorities to repress religious communities, stifle peaceful dissent, and detain and imprison people.”

“The U.S. Commission on International Religious Freedom strongly condemns these measures. Under the guise of confronting terrorism, they … grant authorities sweeping powers to curtail civil liberties, including setting broad restrictions on religious practices that would make it very difficult for religious groups to operate.

“The Russian government uses its current anti-extremism law to target religious communities because the legal definition of extremism does not require the threat or use of violence. ‘Extremism’ charges can include the peaceful promotion of ‘the superiority of one’s own religion,’ and have resulted in religious texts being banned and members of non-violent Muslims groups and Jehovah’s Witnesses imprisoned.”

“This is an absolutely draconian law; even the Soviet Union did not have such an overwhelmingly repressive legislation. This is 100 per cent a step toward an Iron Curtain.”

“[Putin should reject the law because of the] unconstitutionality, contradictoriness and legal uncertainty of some of the legal norms contained in them.”

“The government will keep a wary eye on the implementation of that law and will take relevant measures on the President’s order in case of any undesirable developments.”

“[The law] is very restrictive on its face … Despite decades of enforced atheism under the USSR, in my experience the Russian people are people of deep faith. Religion inspired their art, their literature and their music, and I think that the natural human instinct to share their faith will prevail and Russians will find the freedom to live their faith.”

“The Russian Orthodox Church is part of a bulwark of Russian nationalism stirred up by Vladimir Putin. Everything that undermines that action is a real threat, whether that’s evangelical Protestant missionaries or anything else.”

Edward Snowden, US whistle-blower granted asylum in Russia, wrote this on Twitter:

#Putin has signed a repressive new law that violates not only human rights, but common sense. Dark day for #Russia. https://t.co/J4I2SQ9VCe