UPDATE (18 July): A court in Nairobi has charged four police officers in connection with the murder of a lawyer and two of his companions.

Willie Kimani, Josephat Mwenda and their driver, Joseph Muiruri, went missing in June after Mr. Kimani filed a case against a police officer on behalf of Mr. Mwenda. Their killing has provoked widespread protest against extrajudicial killings in Kenya.

The four pleaded not guilty but the judge ordered they remain in custody. They face three counts of murder for the deaths of Kimani, Mwenda and Muiruri.

The human rights lawyer, Willie Kimani, whose alleged murder by “rogue elements within the [Kenyan] police” has sparked mass demonstrations in Nairobi, was working for a Christian charity, the International Justice Mission (IJM).

Kimani, 32, a Christian and father of two, was helping defend a claim by Josephat Mwenda in a case dating from April 2015 – about an incident where an officer from the Administration Police (AP) shot Mwenda during a traffic stop. Mwenda went on to file a complaint against the police officer responsible for the shooting, only to then be charged with traffic offenses and illegal possession of drugs.

The two men and their driver, Joseph Muiruri, went missing shortly after visiting a Nairobi court house on 23 June. Eight days later, on 1 July, the bodies of the three men were found in the Ol-Donyo Sabuk River. Initial reports suggest that AP officers, one of whom Mwenda was defending himself against in court that day, may have abducted them.

IJM, which works with Kenya’s Public Prosecutor to bring criminal charges against corrupt police officers, opened its office in Kenya in 2001. They have helped secure the release of around 200 people imprisoned on false charges.

Its CEO, Gary Haugen, said on Twitter: “If they thought killing my brother Willie would end his fight, they didn’t know him, or us”. Haugen, driven by his Christian faith, founded IJM as an organisation “inspired by God’s call to love all people, and seek justice”.

The organisation said on its website: “We strongly condemn the perpetrators of these murders and the horrific violence inflicted upon these men. IJM exists to protect the poor from violence, and Willie’s life was taken while courageously pursuing that mission.

“As we work to provide comfort and support for the families…we are as committed as ever to our IJM Kenya team and to their struggle for justice in their nation. We will seek justice for Willie, Josephat, and Joseph, and will not cease in pursuit of this case until that end is secured.”

IJM has launched an online petition on Avaaz, the global online campaigning platform, to demand that Kenya’s president, Uhuru Kenyatta, secures justice for the murders. It has collected more than 33,000 signatories so far. 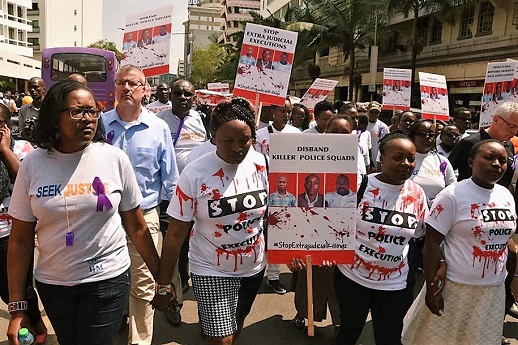 Protestors marching
on the streets of Nairobi demanding justice for the murdered men, July 2016IJM

Anti-police corruption protestors, demonstrating in Nairobi since Monday, continued on 6 July when Law Society members marched on police headquarters. Rallying in their hundreds, they called for the resignation of the Deputy Inspector-General of Police, Samuel Arachi, who is in charge of the Administration Police, four of whose members have been arrested in connection with the murder of the three men.

IJM says the “corrupt judicial and political systems in Kenya …allow police officers to carry out numerous abuses on innocent citizens, who very often end up in prison with no way out and no lawyer to fight for their release”.

According to a Kenyan government report, crimes reported to the police in 2015 involving the police increased by 34 per cent.

Through its online petition, IJM is calling for the Kenyan government to ensure the identification and “meaningful” prosecution of everyone involved with the murders; and also the “immediate” removal of Arachi from his post, “on behalf of every innocent person abused by his police force”.

Lawyers have come out in support of their murdered colleague.

The Law Society of Kenya said Willie Kimani’s death was a “dark day for the rule of law in Kenya”.

The Nigerian Bar Association said “people in the profession should not be harassed. All lawyers must be allowed to represent their clients without fear, molestation and harassment from state agents or any other persons.”

A post-mortem report into the deaths of the three men showed they were brutally beaten before they were killed.

The pathologist found that Kimani was hit on the back of his head repeatedly with a heavy blunt object until his skull fractured. His genitals were also crushed. Taxi driver Joseph Muiruri also had injuries to his head and was strangled.

Mwenda, who was the most badly beaten of the three, had injuries to his head, neck and chest. His skull was fractured and blood was also found in his chest cavity.

Kenya’s police have often been accused of brutality and blamed for a series of extrajudicial killings.

On Wednesday, protesters torched the camp where the four policemen were based, jeopardizing the collection of potential evidence.