India’s Supreme Court Chief Justice has ordered that adequate compensation has not yet been paid to the victims – in 2008 – of religiously-motivated violence by Hindus against Christians in the Kandhamal district of Odisha (formerly Orissa), eastern India.

The success of the petition, brought by Raphel Cheenath, the local Catholic Archbishop in 2008, means that Chief Justice Thakur has ordered that the Odisha government should now arrange extra compensation for those affected.

About 100 Christians were killed, 300 churches and 6,000 Christian homes damaged and 56,000 people displaced (many until now) after the killing of a Hindu leader, Swami Laxmanananda Saraswati, on 23 August, 2008. His death sparked the worst case of anti-Christian violence in India’s history, as Hindu fundamentalists blamed Christians for the Swami’s murder.

Campaigners say the National Human Rights Commission has been “sitting for years” on the plea for enhanced compensation for the Christians – who were paid token interim compensation of $150-750 for completely damaged houses.

Despite over 25 visits to government offices, Obseswar Nayak in Borimunda village, for instance, was denied the maximum compensation of Rs 50,000 (US$ 750) for a “fully damaged house” because “part of the wall was intact”, so he was entitled to only compensation for “partial damage”.

Another “partially damaged house” – with its first and second floor ceilings burnt – was John Pradhan’s home in Gurkapia village. Government officials listed it as “partially damaged”, adamant that “part of the wall was intact”.

In the days that followed his murder, the Swami’s body was taken across Kandhamal, “accompanied by thousands of Hindus…to incite the primordial passion of revenge among Hindus in one of the least developed districts of Odisha”, notes a website set up to ensure justice for the minority Christians affected.

“The [Hindu extremists] wanted to make a spectacle of [the body], and were prepared – as events were to prove – to take full advantage of the passions that would arise. They did not even go by the shortest route, but meandered across [Kandhamal],” noted a report by a group of human-rights organisations. (See route below.) 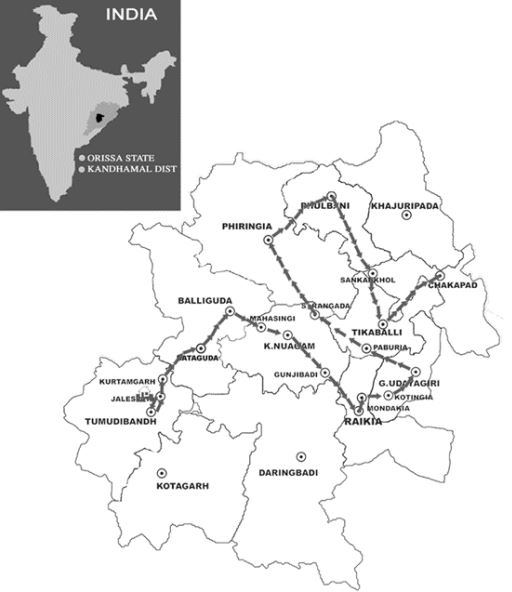 Three-quarters of the damage done to Christian homes took place along the route of the funeral procession, the website reports. Among the slogans shouted was, “Kill Christians and destroy their institutions”.

After the violence, the local community has struggled to receive adequate compensation from the government, a source of much contention. In June 2013, according to The Hindu, a report recommended that the Odisha State government “take immediate measures to adequately rehabilitate and resettle the victim-survivors of the Kandhamal violence”. The report further urged the government to “ensure full reparation to those whose livelihoods were affected due to violence and strife”.

Sajan K. George, president of the Global Council of Indian Christians, told Fides news agency: “It is a step forward in justice for the victims of Kandhamal. It is a positive sign that the Supreme Court of India recognised as unjust compensation paid. The justice procedure is slow and inadequate, but this is a sign of hope.”

“It is a step forward. It is a positive sign. The justice procedure is slow and inadequate, but this is a sign of hope.”

Anto Akkara, who has written a book about the Kandhamal events, “Who killed Laxmanananda?”, wrote in it that Chief Justice Thakur, on appointment as the 43rd Chief Justice of India in December 2015, had declared: “People of [India] need not live in fear until the time the judiciary is independent. When the Constitution guarantees Rule of Law to those who are not our citizens, there is no question that citizens of India, no matter of what religion or faith, should feel unprotected.”

His appointment, said Akkara, had been “like a beacon of hope for those living in fear” because Thakur also assured: “We [the Supreme Court] have no reluctance to protect the beliefs of our fellow citizens. As long as Rule of Law prevails, no-one has to be afraid.”

Akkara also started a petition to outline the major discrepancies and apparent injustices in the case against seven Christians who were eventually convicted of the Swami’s murder in 2013, and each sentenced to life imprisonment.

At least one other tragedy could be said to have emerged from this failure of compensation to adequately re-build the Christian community.

Father Ajaya Kumar Singh, director of the Odisha Forum for Social Action, told Asia News in April 2016: “After the violence of 2008, young people migrated to other states in search of work.”

One such oldest son, Rahul Nayak, 25, was talking to his parents back in Kandhamal on his mobile phone a year ago because he had left for work in Thrissur (in the southern state of Kerala thousands of miles away). Both his parents, who had climbed to the top of a hill because it was the only place to get phone signal, were shot and killed by India’s largest federal paramilitary force, the Central Reserve Police Force, who were patrolling for Maoist rebels. Almost one year on, human rights activists say “no official has visited the village nor has any meaningful investigation taken place”. They say public protests forced the government to give some compensation to the orphans (including two teenage sons), but that there has been no investigation of the police involved.