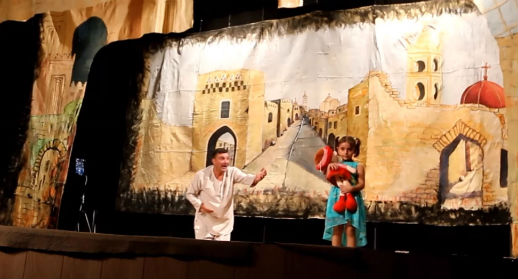 Part of a play performed
by Iraqi Christians forced to flee to Kurdistan after the self-proclaimed Islamic State seized their northern town of Qaraqosh.Video capture / World Watch Monitor

These lines are part of a play written and performed by Iraqi Christians to remember what happened after the self-proclaimed Islamic State seized their northern town of Qaraqosh, then Iraq’s largest Christian settlement. Performed initially in the Iraqi Kurdish capital on the first anniversary of the invasion, the play has since been performed for Iraqi refugees in Lebanon, too.

The entire production was written and acted by internally displaced people living in Erbil, capital of Iraq’s autonomous Kurdistan region, who remained hopeful of returning home one day – even though it’s now the second anniversary of Qaraqosh’s takeover.

On the morning of 6 Aug., 2014, IS first shelled and then captured the town, killing several people. The seizure of Qaraqosh, only weeks after about 1,000 Christian families escaped from Mosul, led to the second-largest number of displaced Christians recently – the two combined were the largest sudden displacement of Iraqi Christians in modern history.

The play also touched on the many hardships Iraqi Christians have endured over the past decade.

“They don’t need actors, because they are from Qaraqosh themselves,” said one spectator.

The play starts with ominous music and red light – a threatening mood. Masked men, dressed in black, carry in someone wrapped in a blood-stained piece of cloth.

Suddenly the ‘militants’ disappear; lights come on. Moshtak – scared and confused, crawls out from underneath the cloth: holding it with disgust, he realises that Islamic State has come to his city.

The next act begins with peaceful music; a young girl skips around in circles with her doll. The music gets louder, Moshtak stands up. A young girl appears in a blood-stained dress. Moshtak, stunned, at first does nothing, then says: “Christina, where have you been, beautiful? Your mother is looking for you. She looked for you everywhere. Where did they take you, beautiful?” The girl continues to wander, then stops and looks out with a serious expression. The music becomes disturbing again with the return of Islamic State militants. Suddenly the doll drops and the young girl disappears.

One spectator commented how, at this point, “The emotion was tangible and sent a shiver through the audience because everyone is familiar with the story of three-year-old Christina, snatched from her mother’s arms by Islamic State militants. No one knows Christina’s whereabouts.”

Moshtak calls out, “Can any of you bring Christina back to her mother? Yes, there was a disturbing incident. No lovers, no roads and no one to bring Christina back! No bells, no brides, no mothers, and no elders sitting by the wall of Marhana sewing history and beautiful memories. Was everything a dream? Was it an illusion? No! No! Qaraqosh was not a dream and never will be!”

Moving through the desolation of loss, Moshtak is reminded of the Christian belief in resurrection from the dead. In turn, he reminds the Christina he remembers “that they will pass through the graveyard”, but that one day “she will wear a new dress.”

The play concludes with a sense of hope. The last act reflects Palm Sunday, an annual highlight for the residents of Qaraqosh, when they would go out on the streets, to sing and wave olive-tree branches together.

Although all that Moshtak has left is the doll, which he clutches to him, he says: “But know this, no matter how many martyrs fall on our road of martyrdom, we shall come, we shall return carrying olive branches in our Palm Sunday procession, with great joy.”

“We will come back,” the actor says, with hope in his voice. “We may be displaced and countries may open their borders for Christians, but one day we will return to our beloved land and cities. Then, on Palm Sunday, the streets will be filled again with men and women. All of us then will be waving branches of the olive tree and we will sing songs together.”

As Moshtak started singing – “Long is the road, indeed long, and covered in blood. But we shall carry olive branches until the Resurrection” – many in the audience stood up and joined him. And his hopeful ending of ‘Hosanna’ was celebrated by roaring applause from the audience.

‘With a smile and a broken heart’

One spectator said they found the play very moving.

“What is performed on stage is what we feel. We live this life, with a smile and a broken heart,” said the spectator. “For some, this play actually might be too much for them to watch. I’m hesitant to invite my neighbour, since I know she is still suffering from the traumatic events every day. Though the conclusion of the play is very hopeful, so it also might be even good for her to watch.”