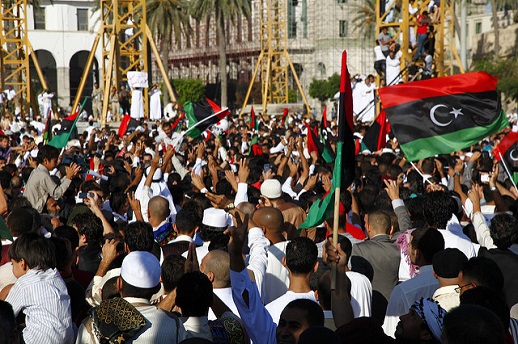 It’s five years this month since Muammar Gaddafi’s government in Libya was overthrown when rebels stormed his compound and he went into hiding. However, despite high hopes, the ongoing anarchy there now makes it “one of the most dangerous places in the world to be a Christian”, according to a new report by Open Doors International, whose World Watch Research team monitors such developments.

The Church in Libya, made up almost entirely of foreign nationals, was never entirely free to worship during Gaddafi’s reign, notes Libya: Freedom of religion in the land of anarchy, but it says the situation for Christians is now much worse.

Open Doors estimates that of an estimated 25,000 Christians in Libya, only 150 are Libyan nationals, who belong to underground “house” churches, due to the difficulties of practising Christianity when being ethnically Libyan is considered synonymous with being Muslim. Many of the rest include migrants from other African countries on their way north, many of those hoping to eventually cross into Europe.

The dangers of being a Christian – native or otherwise – are exacerbated by a growing climate of intolerance of other faiths than Islam, the report notes.

“They shaved our heads. They threatened to sever our heads in implementation of Islamic Sharia, while showing us swords…. I was taken to clean a bathroom, and the man pushed my head inside the toilet and sat on me.”

“The persecution against Christians is not only being perpetrated by organized Islamic militant groups. Christians face harassment and persecution in their everyday life from ordinary Libyans as well,” it states.

A 29-year-old Nigerian Christian is quoted as saying: “I’ve had some scary interactions with men on the street…. One day I was attacked because I was wearing a cross. The men said I should have covered it.”

An Egyptian Copt is also quoted. Amgad Zaki, 26, describing his ordeal at the hands of one Islamist group, Libyan Shield, says: “They shaved our heads. They threatened to sever our heads in implementation of Islamic Sharia, while showing us swords…. They dealt with us in a very brutal way, including forcing us to insult our [former] Pope Shenouda…. I was taken to clean a bathroom, and the man pushed my head inside the toilet and sat on me…. I was dying every day, and at one point I thought death is better than this…. [We were] flogged, forced to take off [our] clothes in cold weather and stand at 3 a.m. outdoors on floor covered with stones.”

Dembele adds that in a single incident, around 100 Egyptian Christians were arrested for allegedly proselytizing, leading “some to argue that there is intent to ‘fully eliminate the presence of Christians’.”

After the three mass summary killings of Christians in Libya last year, during which at least 49 Christians from Egypt and Ethiopia were beheaded and shot, Amnesty International quoted a Nigerian Christian as saying Libya was a country where Christians “shouldn’t come”.

Amnesty’s report said: “Christian migrants and refugees in Libya are at particular risk of abuse from armed groups aiming to impose their own interpretation of Islamic law. People from Nigeria, Eritrea, Ethiopia and Egypt have been abducted, tortured, unlawfully killed and harassed because of their religion.”

The report ends on a positive note, suggesting the formation in January of a “Unity Government”, backed by the UN, provides a “ray of hope” that “at least a semblance of law and order” can be restored.

However, Dembele says it is “important to be cautious as to whether any form of government in Libya will take up the issue of protecting Christians seriously”, warning that “a policy of appeasement may well be employed by the new government, tacitly if not explicitly, in order to gain the support of some radical groups”.

In conclusion, Dembele says: “While the current trend seems to indicate that the second Libyan civil war is almost over, it could take years for Libya to emerge from its current state of chaos. In all likelihood, the most ardent jihadists will continue some form of insurgency and attempt to derail the peace and transition process.

“With the end of hostilities among the major armed factions and a decline in the intensity of the conflict, there is a cause to be optimistic and to expect that atrocities perpetrated against Christians in Libya will come to an end or, at least, become increasingly less likely to happen.

“At the same time, there is reason for caution: Islamic militant groups will no doubt have much influence in the young Unity Government and in the process of creating a new and more permanent political order. That brings with it the risk that a more permanent, institutionalized and state orchestrated form of persecution against Christians could become the new norm. The nature and content of the constitution that will be adopted in the transitional process could be very decisive in this regard.

“Any hope for an improvement for Christians is contingent upon the political and security condition in the country improving. Hopefully, the Unity Government formed in January 2016 will be able to assert more and more authority and restore law and order in the country. If this happens – even though it would not necessarily guarantee freedom of religion for Christians in Libya – such a state of affairs could help Christians become less vulnerable to the most egregious forms of persecution. However, in the long run, it will be the nature of the permanent political and constitutional order emerging from the current peace and transition process that will be the most decisive factor for the freedom of religion of Christians in Libya.”