They are being encouraged by the government, which has won back territory from the insurgents but which is also struggling to provide enough aid.

World Watch Monitor received a first-hand account from church worker Isaac*, describing day-to-day living now that the population is back in a mostly Christian part of Adamawa, one of the states most affected by the Islamist insurgents.

He found people full of hope as they began to pick up their lives back in their desolated towns.

“The car chewed up the many kilometres of our journey. Large regional highways turned into narrow winding roads. In the pouring rain, the car found it hard to grip on the uneven surfaces.

“The government has won back territory from Boko Haram and encouraged people to return home. I was going to visit some of the families in Christian-dominated Adamawa.

“An estimated two million people were displaced by Boko Haram in northern Nigeria and the government wants people to return home because it’s unable to provide for so many.

“Many Christians did not need asking twice. In the Internally Displaced People (IDP) camps, some faced pressure to convert to Islam just to get food. Outside the camps, people found staying with friends, family or other hosts was no easier – they were dependent on the goodwill of businessmen or other Christians. Often food ran out and the living arrangements were not suitable in the long-term.

“Sporadic attacks by Boko Haram continued, but the Christians I met returned home despite the dangers. Worse still, Boko Haram had all but destroyed their villages.

“The first thing I noticed after arriving was the great emotional strain on the returnees. A lucky few were able to reunite with family members, but many widows and orphans experienced afresh what life without their lost loved ones really means. 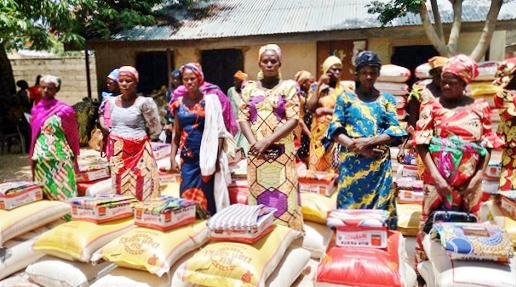 “To have fled violence and returned to ghost-towns was hard on them. Boko Haram destroyed whole communities – homes, schools, health centres and churches were not spared. They systematically destroyed water pumps and polluted wells by dumping corpses in them.

“Farms that were deserted have led to a shortage of food, and malnutrition – especially among children – is common. Aid agencies have struggled to keep up with demands. UNICEF says tens of thousands will die if not helped soon.

Widows and orphans can suffer most. Doregne lives with her children in Mubi, the business capital of Adamawa state. She was widowed some years ago and, living under the threat of attack from Boko Haram soldiers, found it hard to provide for her family. “One day things got desperate,” she said. “I told the children I did not know what to do anymore and said perhaps it would be better if I left them in the care of someone else who could better provide for them.”

Fortunately, food aid arrived in time to keep Doregne and family together.

“Church buildings suffered,” continued Isaac. “One pastor told me there wasn’t a single Bible left – all were burned. ‘This is one of the most painful things for us to deal with,’ he said.

SB* once followed Islam. He became a Christian and is now a pastor helping care for other Christians who have suffered loss of family, income and property. He was displaced by the fighting and lost a close family member.

Pressure to return to Islam

He felt pressures to return to Islam but always had good relations with his Muslim family and neighbours. But over time, he said, he noticed a change in their attitude. By the time Boko Haram arrived in the area, many had bought into its radical ideology and were looking to benefit from the political landscape the insurgency created.

Christians face threats from other groups, like the Fulani herdsmen in Nigeria’s Middle Belt. This nomadic group, who are largely Muslim, were most recently suspected of killing Joseph Kurah in June. Kurah was a regional chairman of the Christian Association of Nigeria.

“Local Christians don’t expect much help from the government,” said Isaac, “because, in some cases, aid is given to Muslims as a priority. This has already led to confrontation between youths in places like Michika (a key trading town seized by Boko Haram in 2014) and Gulak.

“But desperation was matched by determination. These Christians refuse to let the challenges stop them from taking back their homes.

“They are rebuilding houses with materials like corn stalks, wood, grass and mud. It’s a far cry from the more permanent structures Boko Haram destroyed, but it’s a roof over their heads that offers protection against the elements.

“Everyone helped out, even young children. I will never forget watching young children help their father put up a mud fence around their new huts.

“Church activities resumed despite there being little left of the buildings. Some were rebuilt, but many others couldn’t afford the costs, so gathered under trees or met in the ruins of their former church building.

“One church was little more than a skeleton, with no roof or walls. The congregation placed anything resembling a seat on the ground so they could hold a service without having to sit in the dirt.

“Markets are back in operation despite fear of occasional attack. That’s an important step towards reviving the economy.”