A week after a new report claimed that life for some Christian refugees in Germany is “still unbearable“, a case study has been released as an example for other refugee centres to follow.

The study, which profiles a refugee centre in the central German town of Rotenburg an der Fulda, notes that “much action is needed” and demands there be “no more integration experiments at the expense of Christians”.

A list of recommendations is given, including an increase of non-Muslim staff; training for staff about the history of and potential for inter-religious clashes; and education for asylum seekers about religious freedom.

The centre is praised for its response to incidents in June and July, when what the local press initially reported as a “drunken brawl” between refugees was later discovered to have been religiously motivated.

In July, Christians were evacuated from the centre after a message was written on a wall, saying, “To all Muslims: now is the time to behead the unbelievers”.

Open Doors Germany, author of the case study and co-author of the initial report, praised the decision to evacuate the Christians and the subsequent “firm address” to all Muslim staff, in which it was stressed that “such attacks should not be allowed to happen again”. The next day, the Christians were returned and the centre manager told the staff he would be “keeping his eye on them”. Since then, no incidents have been reported.

Open Doors acknowledged the sensitivity of reporting religiously motivated violence, and the possibility some will “exploit” it to feed right-wing or anti-Islamic agendas, but stressed that “the human right of religious freedom and the protection of victims in a country like Germany – that is a constant admonisher of human rights abuses on an international scale – should not be sacrificed for political objectives or the interests of individual groups.

“It is therefore everybody’s duty to take action, so that the protection of the victims can be guaranteed. To remain inactive, to trivialise or to remain silent due to political or other reasons, is to be just as guilty as those who exploit the situation for political reasons”.

The charity said that, in most centres, “Christians have [a] pretty slim chance of getting help” because “the victims of religiously motivated attacks are a minority, and the reasons why Muslims attack Christians and other religious minorities are not well known to facilities’ operators and management. 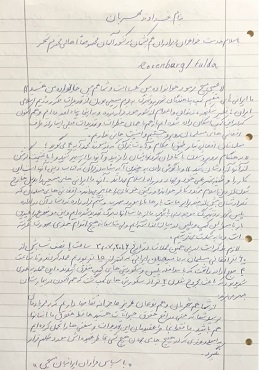 “We, the Iranian refugees based in the city of Rotenburg, have fled from the Islamic Republic of Iran because we have been accused of being Christians and therefore have repeatedly been threatened by torture, imprisonment and the death penalty…

“Here, where we have been accommodated presently, we are exposed to the same kinds of threats as before, this time at the hand of Afghan Muslims, and we fear for our lives.

“The Afghan refugees … call us Iranian Christians ‘apostates’ and ‘infidels’ because of our decision to leave Islam and consider the shedding of our blood as legitimate. (Or even necessary.)

“The Muslim Afghans, who by far outnumber us, have beaten us repeatedly … They have threatened to kill us… Therefore we are very much afraid.

“We are asking you, our fellow citizens, desperately for help. You, who engage yourselves in the protection of pets, please also engage yourselves on our behalf. We are suffering these threats and difficulties because of our faith.

“In the hope for the day when throughout the world no-one will be suppressed because of their faith. Thank you very much, your Iranian Christians.”

“For this reason, religiously motivated attacks are either not recognised or they are deliberately trivialised as general conflicts between refugees. The families of the predominantly Muslim support staff, i.e. security personnel and interpreters, will tend to side with their fellow believers in religious conflicts or in some cases even become perpetrators themselves, as experience shows.”

Thirty-two of the 49 Christian refugees living in the centre at the time of the study (out of a total of around 700 (70% Muslim, 10% Christian, 20% other) agreed to be interviewed. Open Doors praised their “courage … [in relating] their experiences of religiously motivated attacks”.

Open Doors noted that the tension in the centre had increased around the time of Ramadan, when hunger and thirst among the Muslims led to heightened emotions.

One interviewee said that, during Ramadan, “The Afghans does not want [sic] to use the same washing machine we wash with because to them we are unworthy and impure. From the moment the Afghans knew that we are Christians, they disinfected the bathroom every time we used it. They call us infidels, neciz [impure], won’t shake our hands and are very careful to not have any physical contact with us.”

Open Doors added that, “In general, the Muslim refugees avoided any contact with non-Muslims during Ramadan – fearing defilement and becoming impure. They said it would render the validity of their fasting null and void… Muslims avoided touching any common objects (e.g. body contact with toilet seats) so that they had no indirect contact with ‘infidels’. Sanitation became extremely poor. It was unclear who was going to be responsible for cleaning up the faeces, which then led to frequent conflicts within the community.”

The charity said it was particularly important for staff to recognise the challenge of dealing with an influx of refugees from Islamic nations.

“If we take a look into the mainly Islamic countries from which many of these refugees come, and consider how they treat religious minorities, it is obvious that their understanding of Islam is most definitely not compatible with the idea of religious freedom and the equality of all people,” the study noted. “Thus, it is justified to speak of systematic attacks, because the cultural and religious influence of a large number of refugees is based on the teachings of the Quran, something which is deeply ingrained.”

Open Doors added that refugee quarters “are much more aligned to the needs of Muslims, which then often has substantial side effects for the other residents”.

“The situation in the Rotenburg reception centre is no different from many other, comparable facilities where Muslims has been living long enough to establish their own Islamic parallel society,” noted the study. “Because of their faith, Christians are devalued to become second-class citizens and are branded ‘impure’ and ‘apostates’, while enduring physical assaults whenever they offer resistance. The same mind-set is also expressed by moderate Muslims, due to the fact that, according to Muslim thinking, Islam is the superior religion, which pursues the submission of all people to Allah.”

Another interviewee reported: “Every day the same group of Muslims from different countries walks through the quarters and forms a Sharia council, consulting on what they should do with us and according to which laws they are planning to sentence us. The council consists of Sheiks und Mullahs.”

Many of the Christian refugees who have fled to Germany have left nations where persecution against Christians is “severe”, according to Open Doors. The 49 Christians in the Rotenburg reception centre are from Iraq, Iran, Eritrea and Ethiopia. On Open Doors’ 2016 World Watch List, the annual ranking of the countries where Christians face the worst persecution, Iraq is 2nd, Eritrea 3rd, Iran 9th and Ethiopia 18th.

Open Doors listed these recommendations for other centres:

• The percentage of non-Muslim security staff must be adequately increased. Christians and members of other religious minorities should be employed [as staff] at all levels.

• For the asylum process, all Christians must have Christian interpreters.

• Christians [should be] connected to local churches … [and] Christian contacts [should be assigned] whom Christians can turn to when affected by persecution.

• In the case of any family affiliation between refugees and support staff, it is vital that religious impartiality is guaranteed and that effective supervision is employed on a regular basis.

• The facility’s management and staff members must be informed about the religious motives behind discrimination against Christians and other religious minorities by Muslims whose native countries have an Islamic majority.

• With the help of a pre-prepared guideline within the framework of integration, all asylum seekers in the quarters must be educated explicitly about religious freedom and specifically be informed on the rights of Christians and other religious minorities (including moderate Muslims) within refugee facilities and reception centres.

• Preventive measures [should be implemented], ensuring the protection of religious minorities during the entire process of asylum-seeking and integration.

• The proportion of Christians and other religious minorities [should] correspond with that of Muslims in shared accommodation.