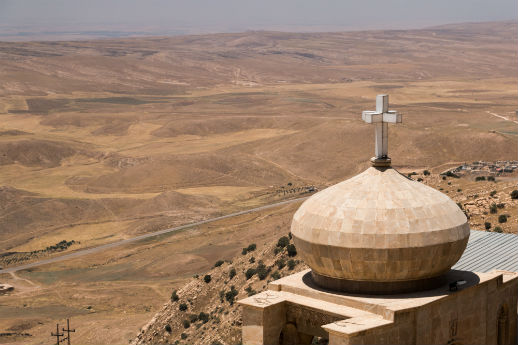 As anti-Islamic State (IS) forces prepare for a major push to dislodge the jihadists from Mosul, Iraq’s second largest city, thoughts are turning to what could happen to those still living in the region. Displacement camps are being prepared; some estimate up to 2 million may flee the city if fighting starts.

One place which has sheltered those already fleeing is one of the oldest Christian monasteries in existence: St Matthew’s (Mar Mattai), built in 363AD, halfway between Kurdish-held territories and IS-controlled lands, 40km east of Mosul. Its Deputy Bishop, Father Yousif, knows first-hand how Christians have suffered in his native Iraq.

“My family used to live in Mosul. They killed my brother.” He paused: “It was on his birthday.”

Ragheed Fahmy Ibrahim was 37, married with two children. He worked as an electrical engineer and served as a deacon at his church, before he was shot dead on 11 May, 2006.

“On that day I was with his family preparing for his birthday,” recalls Fr. Yousif. “We got a phone call telling us Ragheed had got into a fight. When I arrived at the hospital, I saw he was shot with three bullets; the first was in his head – entered from one side and out from the other – the second was in his shoulder, and the third in the chest above his heart.”

It was meant as an act of intimidation against Christians, Fr. Yousif says, noting his brother was monitored and his killers chose that day specifically. “They knew everything. They chose a Thursday evening, as they knew no doctors would be staying at hospitals late before a weekend in Mosul. They made sure he would die.”

Fr. Yousif later made arrangements for Ragheed’s wife and children to leave Mosul.

Other members of the friar’s family did not want to leave Mosul. For them, the city, which countless Christian generations called home, was where they lived, worked, and where practically all their life was. They were trying to convince themselves that, despite the tragic loss, things would still be normal in Mosul.

Another of Fr. Yousif’s brothers had a Muslim apprentice, Mohamed, helping him with his electric appliances business.

“One night, Mohamed, whom my younger brother thought of as a friend, came to him and said: ‘Your name is first on a hit list,” revealing himself as as an Islamic fighter, he added, ‘I want to tell you that, because you trained me, I could not forget that. They are thinking of killing you tomorrow!'” says Fr. Yousif.

When he told his family, they immediately decided to run away to nearby Iraqi Kurdistan in the country’s north-east. “That was when my family eventually moved out of Mosul, six to seven months after Ragheed was killed,” Fr. Yousif says.

Since the summer of 2014, Mosul, and the surrounding villages of the Nineveh Plain, have been under IS control. All Christians were given the traditional Islamic ultimatum: convert, die, or live under the jizya tax, the humiliating condition set out by Sharia against conquered peoples. Hardly any non-Muslims live today in those areas.

Yet even before IS overran Mosul, things were not easy for Christians. Fr. Yousif says Christians couldn’t work with the government because they chose not to ally with any of the dominant political powers in Iraq post-Saddam.

Fr. Yousif encourages the few Christians remaining, now mainly in Iraqi Kurdistan, to leave. “The future here is bad. Every time a terror group appears under a different name and sets out to persecute Christians. I’m a monk, like a soldier I don’t think about [myself],” but he encourages his family and others to seek a better future outside Iraq.

“My brother Ragheed used to say in the last months before he was killed: ‘We have a lot of sins. These sins cannot be washed but by [Jesus’s] blood!’ I consider him a hero killed for the name of Jesus.”

For the rest of Iraq, Fr. Yousif’s words seem prophetic: “Jesus, when on the way to Golgotha, told the women not to weep for him but for themselves. For if people do these things when the tree is green, what will happen when it is dry?”

“Persecution is a pride for us,” the Iraqi monk says.

When asked if he can find it in himself to forgive his persecutors, Fr. Yousif smiles. “You know, there is a chance they might know God someday.

“I forgave them. Believe me, I can tell you even Ragheed’s wife now forgave those who killed her husband.

“[The Apostle] Paul used to persecute Christians, but later he knew Him and believed.”

‘Take the children and leave!’ Two years on, no word from husband

As IS jihadists came closer, on 6 Aug., 2014, Christians started to move out from their town of Qaraqosh in Iraq’s north-eastern Nineveh Plains. That night, Khalid told his wife Hanaa, mother of their seven children, to take them and go, promising to join them soon. 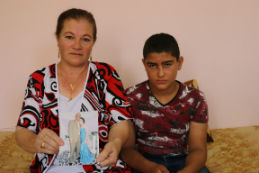 “He thought it would only be a brief attack and families would come back to their homes,” Hanaa recalls with tears. (Last time they had heard IS fighters were coming, families went out of the villages only to return days later.)

This time was different. “He could not follow us!” his wife says, and the last time she heard any news of him was on 10 Aug. 2014. Khalid did not have a mobile phone, as he’d told his wife to take it with her.

Today Hanaa lives in a shared accommodation with two other displaced families in Erbil in Iraqi Kurdistan. It’s a house of three rooms, each room occupied by one family. She shares hers with her son, Jameel, now 11, and another son who serves in the army, hoping to help free Qaraqosh from IS.

I carry Khalid’s photo and run here and there, trying to hear anything about him.

“He so wants to go back and see our house in Qaraqosh,” she says of her son. “In May this year he was shot while fighting IS in nearby Tel Skuf. He’s getting married soon … [but] our joy will only be complete if we hear anything about Khalid.”

Jameel says he thinks of his father all the time, breaking into tears when Hanaa mentions Khalid’s name.

“I carry Khalid’s photo and run here and there, trying to hear anything about him,” says Hanaa softly, her eyes filling with tears.