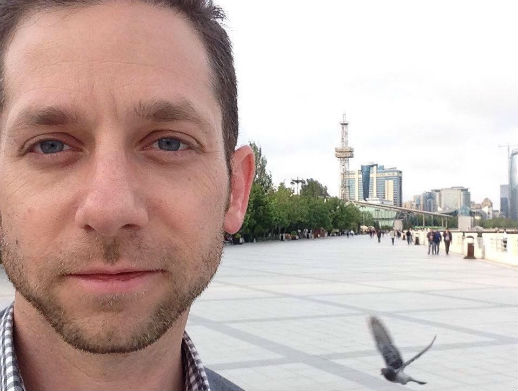 Turkey deported an American Christian pursuing doctoral studies at Ankara University this week, revoking his residence visa 10 years after the scholar and his family first arrived in the country.

Ryan D. Keating, a Yale University graduate, was refused entry by immigration officials at Istanbul’s Ataturk airport when he arrived from London in the early hours of 17 Oct. Presenting Keating with an “inadmissible passenger notification report,” officials informed him verbally that the Interior Ministry had issued a “lifetime ban” prohibiting him from ever returning to Turkey.

Keating, 39, was escorted to an airport detention centre for the remaining hours of the night and then put on a flight back to London at 7am.

The written document which Keating was asked to sign before leaving that morning was coded “G-82”, clarifying that his legal residence visa had been revoked as a “national security” issue on 19 Aug.

Keating had first learned that his residence visa had been revoked when he flew to Britain on 8 Oct. “I was surprised and disappointed that I was given no explanation when my ikamet [resident visa] was taken from me at the border,” Keating told World Watch Monitor from London.

“Because I was not told that I had a ban on re-entering Turkey, I expected to be able to come back, as scheduled, a week later. So it was a shock to be taken into custody, and to hear that I was being given a lifetime ban! Again, no explanation was given, even when I asked about it,” he said.

Keating said he is determined to “fight the decision,” and has already given power of attorney to a Turkish lawyer to appeal the ruling within the allotted 60-day deadline. He also sent a waiver to the U.S. Embassy in Ankara, authorising them to comment to the media on his case.

“I’ve always known that it was possible to get kicked out of Turkey for my Christian beliefs, just like it used to happen in Turkey 10 years ago,” Keating said. “But there is no indication why, no evidence or justification for this.”

If you look at the investigations of foreigners in our churches, you can’t find anything illegal. They are not openly accused of anything.

A doctoral student in Philosophy of Religion at Ankara University, Keating had moved to Turkey from the US state of Connecticut in 2006. His wife and four children, aged between six and 12 are still in the family home in Ankara while Keating is temporarily in London.

“If I can’t come back into the country,” Keating said, “my years of work on my dissertation will be wasted.”

In addition to his doctoral studies, Keating has also headed the Ankara Refugee Ministry (ARM), sponsored by Ankara’s Kurtulus (Salvation) Church, for the past few years. In cooperation with three other local churches, ARM provides staple food parcels, used clothing and limited health-care services to 1,000 displaced families from Syria, Iraq and Iran every week. Additional projects include English language courses, sewing-skills training for women and marketable business-skills training to help provide long-term survival solutions for refugees uprooted from their homelands.

Keating is the second American Christian this month to face Turkey’s apparent crackdown against long-time residents of the country involved in active church-related ministries.

The Protestant couple leading the Izmir Resurrection Church were detained without warning on deportation orders on 7 Oct. and held incommunicado for 13 days. Rev. Andrew Bronsun was then transferred to another detention centre on 20 Oct., the morning after his wife, Norine, was released.

The Association of Protestant Churches (APC) in Turkey confirmed that 100 expatriate Protestants have been deported over the past four years. But Ankara’s stance against the tiny Turkish Protestant community and its foreign members has clearly stiffened since the failed 15 July coup and resulting announcement of a “state of emergency” a week later.

“I think the state’s interest in us has increased, but not from a positive perspective,” Rev. Ihsan Ozbek told Al-Monitor this week from Ankara, where he chairs the APC. “If you look at the investigations of foreigners in our churches, you can’t find anything illegal. They are not openly accused of anything. Until today we haven’t heard of a single solid accusation.

“But people are denied entry to the country; those here are being deported. This is extremely disturbing… All these arbitrary practices are enabled by the ‘state of emergency’.”