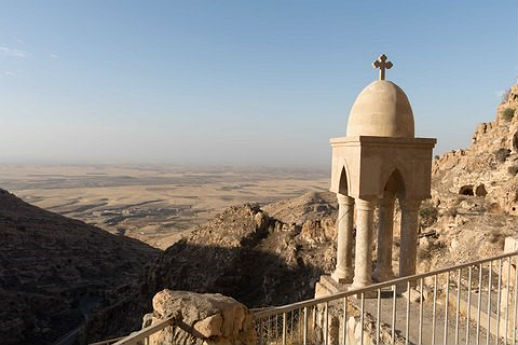 A view from the Christian town of Alqosh in the Nineveh Plain.World Watch Monitor

For more than two years it lasted, just minutes away from Islamic State-held territory. The Iraqi town of Alqosh (50km north of Mosul) is the only Christian stronghold in the country that survived IS.

Looking for signs of hope for the future of Christianity in Iraq? This town, with its four churches, two monasteries and 500 Christian families, is where it can be found.

For those who grew up reading the Bible, Alqosh might ring a distant bell. It was the town where Old Testament prophet Nahum, “the Elkoshite”, lived. His grave, which also houses ancient Hebrew texts, can be visited in the old centre of Alqosh. The message of the New Testament also found its way to this community long ago; since the early Middle Ages this town has been Christian. And it’s determined to stay that way.

“All over Iraq, Alqoshians are known to be strong, tough,” Father Araam, one of the town’s Chaldean-Catholic priests, says. Like many Christians here, he is determined to stay, whatever happens. “I am one of God’s witnesses here. God is still here, why should I leave? As long as I am able to give a glass of water to someone who is thirsty, I am able to serve Jesus in Alqosh.” 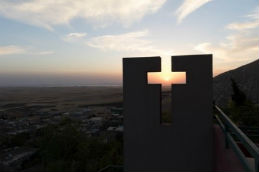 Visiting Alqosh is not easy. Before entering the town, all visitors are stopped at a heavily guarded checkpoint. Only if one of the community leaders will vouch for them are they allowed in.

The safety measures are not an unnecessary exercise; for a long time IS was just a 10-minute drive away. In 2014, IS tried to conquer Alqosh. The women and children all left the town, but most of the men stayed to defend their community, backed by Kurdish Peshmerga fighters. They succeeded; the Christians and Kurds fought off IS, and most families returned.

But there is another reason the close-knit Christian community of Alqosh is wary of outside visitors, Father Araam says. “Our country is almost 90 years old now [Iraq became independent in 1932]. Christians have really never been respected. There has been nothing but war, persecution and pressure.”

‘When needed, I will protect myself’

However, the Alqoshian Christian community chose not to be pushed aside by the successive powers oppressing them. The self-implemented rule – that only Christian Alqoshians are allowed to own land or houses in the town – has kept the community safe from other religions and tribes.

“I’m sorry we have to work this way, but we have had some really bad experiences very close by,” he says. “There used to be more Christian villages here on the Nineveh plain; we lost them all.”

But until today, the informal tribal law system has granted the Alqoshians the opportunity to keep out strangers, ensuring it remains a 100 per cent Christian-owned community.

Often soldiers ask me: ‘Priest, why are you here?’

This freedom comes with a price. The men in the town are expected to play their role in protecting it. Father Araam visits the frontline often in his role as priest, recognisable by his white collar. He opens his phone and shows pictures of himself with Peshmerga fighters.

“Often soldiers ask me: ‘Priest, why are you here?’ My answer is: ‘As Christians we pray for you, we pray you will stay safe, that you will be able to return to your home,'” he says. “IS is a killing machine – they don’t see soldiers as people. 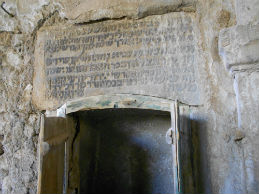 “As a church we have a different story, a story of love. I’ll gladly share that everywhere, even on the battle line. I am here to help as a Christian, but, when needed, I will protect myself and my town.”

In Alqosh the churches and the monastery play their own role. On a hill overlooking the town, the compound of Our Lady Monastery is a popular place for Alqoshians to spend the evening.

The prior, Father Gabriel, sees an important role for the town’s clergy.

“For me as a priest, I see it gives people hope as long as I am here with them,” he says. “Even when IS came in 2014, we didn’t perform miracles. Just the fact that we stayed here as long as we could was a testimony, a living hope for the believers.”

‘Their community is vanishing’

The prior says he feels called to do everything he can to keep the Christians from leaving the country.

“Christianity in Iraq is like a big tree,” says Father Gabriel. “It has been here for 2,000 years, but today our enemies are many and they want to cut down the tree. They want to get rid of us.”

When Iraqi Christians move to Europe or North America, trying to “re-plant” themselves there, their faith is in danger, he says.

“There already are a lot of Iraqi Christian communities in America and Europe, but they are all melting, becoming part of those cultures,” he says. “The next generation will not be recognisable. Their faith will disappear because the community they belong to is vanishing.”

Fr. Gabriel is doing his best to make the place feel safe and hospitable. A small shop sells refreshments for visitors. A young couple just got married and are celebrating outside the monastery gates. A children’s birthday party is celebrated near a farm maintained by the monastery.

Christians have really never been respected. There has been nothing but persecution.

Here it’s possible to forget about IS, the threats and the problems for a while.

“My whole family, except one sister, all of them left the country,” Father Gabriel says. “These people are my family now, my brothers and sisters in Christ. I have committed my life to this church, to these people. Once you give a gift like that, you don’t take it back.

“When Jesus went to Jerusalem, the people were planning to kill and crucify him. Peter tried to stop them, using violence. But Jesus said to Peter: ‘Put your sword back in its place, for all who draw the sword will die by the sword!'”

“Christianity in Alqosh is like gold,” says Fr. Araam. “It is tested in the fire. It hurts, but the result is that the gold will be purer. I see people changing, not just in faith but also in their behaviour. They have felt for themselves that, when everything could be taken from them, God is all that remains. When the government soldiers leave you, when IS comes, when you run out of bullets, who do you cry out to?”

Both Fr. Araam and Fr. Gabriel call upon the international community to support the Christians in Iraq. They say that without political and even military protection of the Christian minority, life will be very difficult for Christians, even if IS is defeated completely.

Fr. Gabriel compares the position of Christians to the state of Israel.

“All the Arab countries are Islamic countries; they are all against Israel,” he says. “And yet, Israel is strong, stronger than the Arab world. Why? If the international community can guarantee safety for Israel, why not do the same for the Christians in Iraq?”

He calls for a UN-protected safe zone for Christians.

“We need international support. Our enemies are many, we are just a small group,” he says.

Father Araam agrees with him and says he is grateful for the many humanitarian organisations already supporting Christians in Alqosh.

“Many groups support our work here. There is still love left in the world. That helps us in keeping the hope that we will have a life and a future here,” he says.