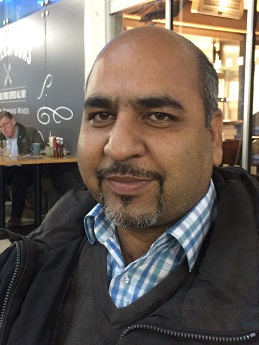 Anser Javed’s father was a sanitary worker in Karachi; his mother was a sweeper. When his father then died in a work accident, the Pakistani Christian boy was sent to an orphanage as his mother was too poor to care for him. Nevertheless, with support and personal determination, he eventually became the Principal of a school which grew from 200 to 600 students in the eight years he led it. Now, he’s Director of an education charity, Starfish Asia. Here, he tells his story:

It was early in the morning, 4am, when I got up, picked up a broom and a garbage collecting basket and headed out to sweep the roads. This was not my destination, I had recently passed my Matriculation exams and got the top marks in the orphanage where I lived after my father died when I was five.

He worked in the sanitary department of the Karachi Metropolitan Corporation, and my mother swept the streets – they had moved from Gujranwala in the north to Karachi to find work.

My dad died after a main sewage hole got blocked. His friend went down into the 10-foot-deep hole to try to un-block it, but drowned. As my father jumped down inside to rescue him, he inhaled toxic gas and water. When the blockage blew out, he injured his side on the iron stair-rungs. They operated on him: I remember him in a mask. He was in hospital for six weeks, then I remember him lying dead on the hospital bed.

Within six months, my mum had arranged a marriage for my 16-year-old sister and realised she couldn’t look after me and my brother (who’s two years younger than me) and still do her sweeping job.

She had it in in her heart that only education could change life for us, and worked out the best way to achieve that for us boys.

So she sent me to live in a Salvation Army Boys’ hostel. I lived there for 10 years, attending a school of 300-400. When I passed all my exams at 16, I got the highest mark (72%) and made history as the top student. It had one of the lowest fees among private schools in Pakistan. Sadly, my brother started having epileptic fits, so he couldn’t go to school.

A local MP promised me a college scholarship, so my mum took out a loan – on interest – so I could go to college, thinking the scholarship would cover it later. It cost 2,975 rupees (around US$30) for a whole year, including two uniforms, two pairs of shoes and books. My mum took out 3,000 rupees as a loan.

But somehow the scholarship never materialised.

So when I was 17, I too became a road sweeper to help support my mum – while I was still studying. Early in the morning, I would go and sweep three roads (both sides) and one back street. I would collect the garbage, carry the container on my head, and walk 500 yards to dump it.

Around that time, my mum started getting a fever: she had contracted hepatitis.

During the day, I tried to find jobs with Pepsi, loading and unloading bottle crates to help pay off the loan.

When it was finally cleared, I asked my mum if I could enrol for a three-month course in a Computer Institute to learn the Dos and Wordstar programmes. I worked 9am to 10pm for 1,000 rupees a day (less than $10 today) with only one cup of tea as my ‘break’. It was good to be at the Institute, but they took advantage of my compassion and kindness. For instance, when they didn’t have money to paint the classrooms, we did it! I taught classes for the owner’s friends, who asked: “Who will teach us if you leave?”

Eventually, the person who’d been in charge of the hostel where I’d lived as a boy became the Divisional Commander of the Salvation Army. I’d typed lots of letters for him. The manager of a bookshop in their compound needed a salesman for their bookshop in Empress Market (in central Karachi), but I thought: “What will I do in a bookshop?”

The first day, I was given a duster to clean, and asked to stock-take thousands of books!

From January 1998, I worked there four-and-a-half years and eventually resigned as Assistant Manager. A few months after starting at the bookshop, I finally stopped sweeping. All the heavy packing and unpacking of books was enough for me.

I met my wife over the phone at the bookshop. She worked in telemarketing and one day she called from a mineral-water company.

“I’m not the manager”, I told her. “Please fax me a brochure”. Which she did. The second day after lunch, she called back: “Sir, if you don’t want to buy, I don’t want you to lie to me”. I replied, “Madam, I’m a Christian, I don’t lie”. She said she was a Christian too, and that bonded us – we married in 2001 and now she’s my backbone!

In August 2001, we became respectively Principal and teacher of the Holy Shepherd School in north Karachi. When I started training to be a Principal, we needed to import teachers from other areas to staff the school.

In 2003, our donors told us that they didn’t have any more money. Starfish Asia’s funding saved it from closing. And all the time I was studying: it took me 10 years to complete four years’ education.

In 2012, I was asked to join Starfish Pakistan as its first Pakistani National Director. Ninety per cent of the staff in our school in Karachi came from my own school.

The school’s Principal now was my disciple – he only graduated after he came to us to finish his studies. Then he did his Bachelor of Education with one of the scholarships I started to help boys like me who couldn’t afford education.

We bought land adjacent to Holy Shepherd School; it was my dream to set up a vocational training centre too. The Japan Embassy in Karachi provided us with 9.1 million rupees (worth $100,000 in 2012) for construction of the building. Now we have more than 75 students a year; they can learn to be an electrician, or learn computer hardware or software – back full circle to where I started!