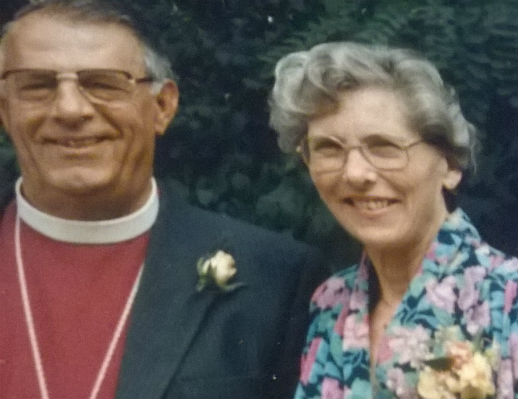 Margaret and her husband, the Bishop of Iran, lost their son in 1980 during the anti-Christian hostility of Iran’s Islamic Revolution.Dehqani-Tafti family

A woman has just been buried by her husband in the grounds of Winchester Cathedral; famous figures such as Jane Austen lie inside it.

Margaret Dehqani-Tafti, who in 1979 took a bullet to save the life of her husband, the Bishop of Iran, died on 22 October 2016 at the age of 85, surrounded by her family. She and her husband Hassan lost their only son in 1980, when he was murdered in the anti-Christian hostility that followed Ayatollah Khomeini’s Islamic Revolution.

Margaret was the youngest daughter of William Thompson, the Bishop whom her husband would succeed. The Briton spent her early years in Iran and met Hassan when he began working for her father after serving as an interpreter in the Imperial Iranian Army between 1943 and 1945. Hassan had been born in Taft, Iran – to a Muslim father who was a shoe-maker and a mother who had embraced Christianity; he became a Christian at 17 in 1938 after attending church-run schools. He and Margaret married in 1952 after he spent two years in the UK, training for ordination at Ridley Hall, Cambridge.

Their Anglo-Iranian match was considered highly unusual, but years later, Margaret explained how they managed to reconcile their different cultures. ‘We have many differences but we both have the same goal: serving God,’ she said. ‘In order to serve God we have put aside our differences and only supported each other in this journey. The other secret is respect; we have accepted each other as we are and neither of us asks for what the other cannot provide. Regarding culture, I must add that I grew up in Iran and Hassan grew up among British people. We knew each other from a very young age, it feels natural for us, culture, language and so on.’

After they had been married for nine years, Margaret’s father William resigned at the age of 75. Hassan was appointed to succeed him, and became the first Persian-born Anglican Bishop of Iran.

However, Hassan’s ethnicity was insufficient to protect him and his family – three daughters and a son – from the rising hostility towards non-Muslims that accompanied the 1979 revolution that replaced a pro-Western monarchy with a Shia Islamic regime.

Life for Christians had never been easy in Iran, but after 1979 many missions and missionaries were expelled. In November of that year, two gunmen climbed the wall of the bishop’s residence in Isfahan, entered Hassan and Margaret’s bedroom, and opened fire at Hassan’s head. Miraculously, the first four shots narrowly missed both of them, but Margaret threw herself across her husband to protect him and the fifth passed through her hand. She is said to have kept the pillowcase that contained four bullet-holes.

The following year in May, while Bishop Dehqani-Tafti was away at a conference in Cyprus, their son Bahram was shot dead aged 24. Bahram had studied in Oxford and in the United States. He returned to Iran, but was stripped of his right to leave when he tried to attend his sister’s wedding in England. Therefore, he started his military service and as part of his duty, he taught English at Tehran University. He was ambushed and attacked on his way back from work one day. Bishop Dehqani-Tafti, unable to attend his son’s funeral, wrote a prayer of forgiveness for the killers, who have never been found. Years later, Margaret was asked by the son of martyred Iranian pastor Mehdi Dibaj how she managed to forgive Bahram’s murderers. She replied: ‘It is just by the grace of God that you can forgive; I have not forgiven them once – forgiveness does not happen once and for ever. I have been forgiving them every day for more than 20 years, as God has forgiven me.’

Because of the increasing dangers they faced in Iran, after the burial Margaret and their daughters left for England, where Hassan joined them from Cyprus. Hassan always insisted on telling people that they left Iran legally.

The family settled in the diocese of Winchester in the UK, where Hassan was made an assistant bishop and continued to lead the diocese of Iran from exile. The couple became a support to the Iranian Christian community in Britain.

An Iranian Christian told World Watch Monitor: ‘Throughout their life together, Margaret was a constant support to Hassan and as the mother of a martyr, an uncompromising witness to truth. The events of our time remind Christians that the history of their faith is inseparable from the sacrifices and examples that people like the Dehqani-Tafti family set, representing the eternal challenge that believers witness in this fallen world. Their lives have influenced the way we think about faith in God, justice, social engagement and what it means to be the follower of Christ, and stand as testimony to the vast violence that we experience in the present age.’

Bishop Dehqani-Tafti’s autobiography, The Unfolding Design of My World, was published in 2000. A book about him and his family ‘The Hard Awakening’ was published by Triangle in 1981.