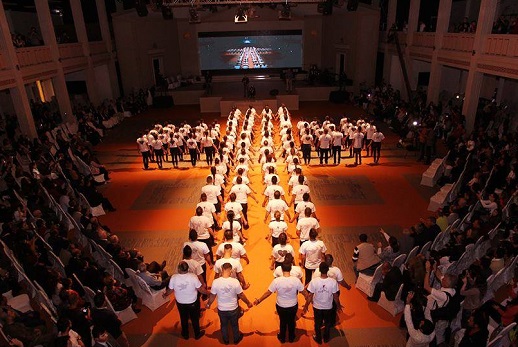 The event opened with around 100 young people forming the shape of a cross.Babylon Ministries

Thousands of displaced Iraqi Christians celebrated a “Return Festival” as the military advance against Islamic State (IS) in and around the city of Mosul raised their hopes of returning home after two years in exile.

The festival in Erbil last Friday (18 Nov.) was organised by Life Agape, with the support of the Chaldean Catholic Church and other denominations. Around 300 volunteers – including 200 from among the displaced – helped. The six-hour event included worship, dance and performances by choirs, and was broadcast by Christian satellite station SAT-7.

Maher Barbary, director of Life Agape, said: “The goal of our meeting was to gather the Christians who are displaced from these villages, and pray for them, and send them back with a new spirit… We believe that Iraq still has hope.”

The displaced Christians who fled to the Kurdish regions of northern Iraq have celebrated the recent advances of the Peshmerga, Iraqi and coalition forces and local militias who are fighting IS. But they have been bitterly disappointed by reports that the retreating jihadists have burned down houses, churches and destroyed valuables that survived initial looting and subsequent fighting between IS and Iraqi soldiers.

Church representatives who have visited the newly liberated villages have brought back photos and videos to their displaced congregations. When they saw the footage, some said they had lost hope in any future for themselves in Iraq.

Speaking before the event, Sana, a young woman from Erbil working in trauma counselling for displaced people, explained: “With this festival we are trying to tell our brothers and sisters: we are with you, we support you. We want to give them hope on this day, so that they take this hope with them in the coming time.” Although some Christians from Mosul have sought refuge in Jordan and in the West, she added: “Christians here want to stay.”

Her colleague Rami, also from Erbil, emphasised: “Their houses are destroyed after the liberation. We want to show organisations, the central government and governments around the world: you have to help them! When they go back, they cannot go back to nothing! They need homes to live in and not just land.”

Indeed, a senior priest in Erbil this week warned that the military defeat of IS may not be enough to encourage displaced Iraqi Christians to return home, saying they would need guarantees of protection so they could rebuild their lives in safety after the persecution they have suffered.

Archimandrite Emanuel Youkhana, a priest in the Assyrian Church of the East and head of CAPNI (Christian Aid Program Northern Iraq), told CNN Christians needed to know the Government would prevent other jihadists from filling the gap left once IS is defeated.