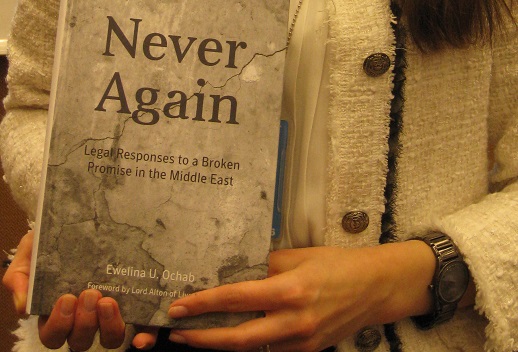 The UN has broken the pledges it made in the aftermath of World War II to prevent genocide from recurring, said Ewelina Ochab.World Watch Monitor

The UN must urgently put in place measures to hold to account jihadists who have committed atrocities against minorities in Iraq and Syria, because existing conventions have become “obsolete”, the author of a book documenting recent violence against them has said.

Vienna-based legal counsel Ewelina Ochab, who authored ‘Never again: Legal responses to a broken promise in the Middle East’, accused the UN of breaking the pledges it made in the aftermath of World War II to prevent genocide from recurring.

Speaking at the book’s launch at the UN’s Palais des Nations in Geneva on 24 November, she argued that the conventions on genocide prevention had become “obsolete” because measures had not been taken to bring to justice members of the Islamic State (IS), whose attacks on Christians and other religious minorities amounted to “genocide”.

Ochab said the legal process against IS members could be carried out in one of three ways: by trying suspected perpetrators at the International Criminal Court in The Hague, by trying them at an “ad hoc” International Criminal Court set up specifically to deal with atrocities in Iraq and Syria, or by setting up a UN-backed court in Iraq, Syria or elsewhere in the Middle East. In the first two scenarios, she said national courts in Iraq and Syria should support the ICC’s work to prosecute all accomplices.

To introduce her work, Ochab held up a piece of a cross that she picked up in a destroyed church in the formerly IS-held town of Qaraqosh in northern Iraq, as well as a few pages of a Bible. Ochab’s book draws on testimonies collected by the Vienna-based charity ADF International. Never Again includes eyewitness accounts of IS atrocities, the international community’s response to recent genocides, and analysis of existing genocide legislation. She argues that the current legal safeguards have failed to protect vulnerable communities from ethnic, cultural, and religious destruction.

According to the last census before the US-led invasion of 2003, there were as many as 1.4 million Christians in Iraq. Ochab noted that today there are thought to be fewer than 250,000. Many factors are behind the exodus of Christians from Iraq, which the chaotic aftermath of the invasion accelerated. The rise of IS in 2014 drove many of the country’s remaining Christians to abandon their homeland. Those who remained, along with Yezidis, who were not given the option to flee, have told of atrocities and soldiers liberating IS-held towns and villages around Mosul have found many churches burnt out and badly vandalised.

A spokesman for the charity said: “We published this book to demonstrate clearly that the Christians of the Middle East are living through a genocide and so that the UN Security Council recognises that and fights the impunity of Daesh [IS] members.”

Citing the executions and crucifixions to which Christians and other religious minorities were subjected during the two years in which Daesh controlled territory in Iraq, spokesman Andreas Thonhauser said: “The impunity of Daesh must stop.”

Only the United States, the Council of Europe, the European Parliament and Britain’s House of Commons have recognised the atrocities by IS against Christians and other religious minorities in Syria and Iraq such as Yezidis as genocide. Canada has recognised a genocide of Yezidis.

IS militants are known to come from Europe, Russia, Central Asia, China and North America, as well as North Africa and the Middle East. Some campaigners have called for them to be prosecuted by the countries in which they have citizenship.

Ochab said the jihadist violence seen in Iraq and Syria forms part of a larger push by Islamic extremists “to eliminate the Christian presence from the Middle East”.

After the Second World War, haunted by the atrocities committed by the Nazis, the international community vowed to never again allow such barbarity. However, Ochab argued that the atrocities experienced by peoples of the former Yugoslavia or Rwanda demonstrated that the promise was fragile. She said in such circumstances that it was necessary to “leave the silence” and “denounce what turns out to be genocide”.