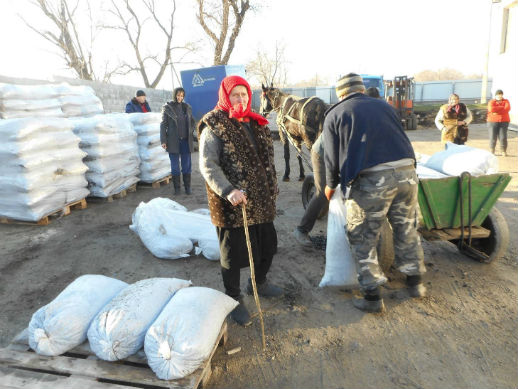 Moldova is the poorest country in Europe. To the east, cushioned between the Ukraine and Romania, and currently in the process of applying for European Union membership, it has this weekend decided its new President will be the pro-Russian candidate, who wants to reverse integration into the EU. (The winner, Igor Dodon, didn’t poll quite enough votes to win in the first election round at the end of October).

Reuters reports that Moldova plunged into turmoil in 2015 after the disclosure that $1 billion had disappeared from the banking system. Street protests erupted and the International Monetary Fund, and the EU froze aid to Moldova. Its former Prime Minister, one of five to hold that office in three years, was implicated, handcuffed live on TV in parliament and later jailed. But many Moldovans believe other members of the pro-EU elite were complicit in the scam.

In various tiny and sometimes subliminal ways, Moldovans are thwarted by corrupt officials, greedy authorities, white-collar crime in the financial sector, poverty, bullying leaders, and a not unsubtle mafia. And Christians are finding it more and more difficult to openly conduct their faith.

Pavel* moved with his wife and three children to a village in the north of Moldova, not far from the Romanian border: “We have big dreams for the village. I consider myself a dreamer and God has given us this plan of community development. We believe long-term transformation can come if we try to bring changes in social, educational, spiritual and economic areas. But the most important thing we hope to see here is transformed lives through the Gospel.”

97% of the country’s 3.6 million population say they’re Christians, but Pavel, who’s worked for many years as a children’s minister in the capital city, Chișinău, explains: “In the Moldovan context, for a better understanding we can use the word ‘believers’. I once did a survey and my first two questions were: No. 1: Do you consider yourself a Christian? No. 2: Do you consider yourself a ‘believer’? Everyone answered yes to the first question, but only four claimed to be ‘believers’. Any other church beside the Orthodox Church in Moldova, in many people’s understanding, is considered a cult or a sect and this is a problem in the eyes of the authorities.”

Life is difficult for believers in Moldova because of the same factors that affect those who don’t – unemployment, poverty, ‘de facto’ orphans (where one or both parents have left the country), alcoholism and corruption. However, though not overtly targeted, it is also the believer’s opposition to the general culture of bribery and corruption, which often puts them – as well as others who oppose it – in the firing line.

“In Moldova, every official expects kick-backs and favours,” says Pavel.

“We can see this in the small communities, where everything depends on the local mayor or other authorities. In some cases, the local priests are even the ones standing against the believers.”

Since the dissolution of the Soviet Union and its collectives, it is the villages in particular that suffer. Left with little or no access to farming expertise, and with few job prospects, many people have fled to neighbouring European countries (mostly illegally) to look for work, leaving behind them a spouse, or small children in the care of elderly parents. With up to 25% of its population working abroad, some sources suggest a staggering statistic of between 50%-70% ‘de facto orphans’.

To make matters worse, the subsequent years of independence from the Soviet Union have seen the area of heavy industry, in the eastern strip of Transnistria, lost to Russian control and almost an entire coastline lost to the Ukraine, leaving Moldova a country with almost no economic viability. According to a recent UN audit, it is the epicentre of European people trafficking, organ trafficking and mafia involvement.

Those who stay, especially believers who devote themselves to work in impoverished villages, are often considered a threat to the authorities and looked upon with great suspicion by neighbours.

“We say that the story of [the Old Testament prophet] Nehemiah is our story,” explains Pavel. “Nehemiah wanted to go back to his people and do something for them and for Jerusalem.”

It has been difficult for Pavel and his family right from the start. It has been a challenge, confesses Pavel “to freely witness the Gospel, to organise specifically Christian events, to stay in Moldova and not to emigrate to another country and just to challenge the general idea in the community that we are not different or strange.”

With the usual difficulties of moving from city to village, far from good schools, amenities, hospitals and even tarred roads, this family faces the constant battle of permissions and procedures and currying favour with the authorities, who indeed have a surprising amount of intimidatory power.

“We had big resistance from the local mayor last summer when we organised a camp for 70 children. I have done many Christian camps before and have never had this kind of resistance before. He wanted to stop me because we called the camp a ‘Christian’ one and we had a program of Bible teaching and other Christian education activities,” said Pavel.

Pavel decided to run for mayor shortly after arriving in the village and was threatened by the mayor at the time, who “suggested” taking his name off the electoral list. It was clear that the voting would be rigged and Pavel decided to step down. It has been almost a year since he and his family moved to the village and they have had some measure of success with the mayor since. Pavel believes that this is largely because of some of the good work that they have managed to do in the village through the help of foreign financial support.

“The story of Nehemiah is our story.”

Pavel and his family support families with disabled children, distribute coal to the elderly and infirm, supply nappies for the disabled and help clean houses. They are building a community centre, and have organised a group of young people to help distribute food packages to the elderly. In the coming months they have plans to begin a small business support program to help people successfully run a small business in the village and, in so doing, they hope to prevent young people from choosing to emigrate.

“Over time, we have seen a lot of positive attitude toward us from other people (the school director, teachers, and other authorities),” he explains. “But for many here it’s still difficult to understand why a family with three children who had a house, jobs and good schools in Chișinău, have decided to move to this poor village.

“When we started our work and especially – given some funds to build the Community Centre – we had – and still have – a concern that people in the village think that we are operating with a lot of money. It has happened in the village before that some families or elderly people have been attacked for money. We hope God’s protection will be on us.”

It’s a long, cold winter in the village and many are without electricity. Pavel and his family are encouraged by the work they have been able to do with provision from sponsors: “During this week I did about 30 visits to elderly and poor people to tell them about our feeding project. Probably half of them shared their life stories and how difficult life is now. They had tears in their eyes and have been moved deeply to hear about the help we are intending to offer in God’s name. Vera, 78, told me with tears in her eyes, ‘With the coal we got from you we have been able to survive during this winter. Without the coal for heating we probably would have died’.”

Selflessly giving and working in their community, living boldly, loving neighbours – this one small family is going about working, despite the rumours, bureaucracy and suspicion. Remaining behind in Moldova, when many others have understandably fled for greener pastures, is a choice they have made in order to transform lives one small step at a time.