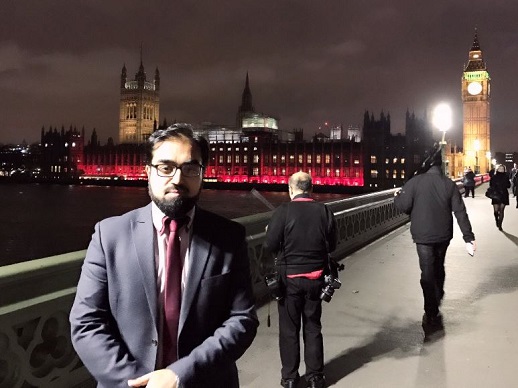 Shaykh Umar Al-Qadri in front of the Houses of Parliament on Wednesday, lit up in red for Red Wednesday in support of Christians under pressure for their faith.Twitter / @DrUmarAlQadri

A leading Islamic scholar has described attacks on Christians by violent Islamic extremists as “heart-breaking” and condemned Islamic extremism as being “exactly the opposite” of what Islam teaches.

Sheikh Dr. Umar Al-Qadri argues that the “real offenders of blasphemy” are not people who draw cartoons of Muhammad, but those who commit atrocities in the name of God and Islam.

Dr. Qadri, who heads the Al-Mustafa Islamic Centre in Ireland, lays the blame for violent Islamic extremism at the door of Muslims who disseminate the Wahhabi-Salafi ideology emanating from Saudi Arabia.

The Sunni cleric told parliamentarians, clerics and activists in London’s Houses of Parliament yesterday (24 November) that the intolerant doctrines of Wahhabism and Salafism have been “aggressively exported” through hundreds of billions of dollars of funding of Islamic centres in the West and in Muslim-majority countries.

“They have no concept of living together in peace,” he said. Naming the world’s most violent groups of Islamist terrorists, he added that the ideology “has produced Al-Qaeda, Daesh [Islamic State], Boko Haram and Al-Shabaab.”

“Wahhabis are still being supported by us in the West,” he said, and called for greater dialogue with people who believe “in democracy and not the ‘Clash of Civilisations'”, referring to the hypothesis that religions and cultures are inevitably in conflict with one another.

Dr. Qadri shared a platform in the House of Lords yesterday with the Damascus-based Syriac Orthodox Patriarch, Ignatius Aphrem II, at the launch of a report by the Catholic charity Aid to the Church in Need, which assessed levels of religious freedom around the world.

It concluded that religious freedom has deteriorated in 11 of the “worst offending” 23 countries in the last two years, and in seven of the remaining 12, including North Korea, Syria and Nigeria, “the problems were already so bad they could scarcely get any worse”. It found that many of these countries were affected by what it termed “Islamist hyper-extremism”, which it defined as “a new phenomenon of religiously motivated violence … unprecedented in its violent expression”.

The crossbench peer Lord Alton, who has campaigned for the atrocities committed by IS against minorities to be recognised as genocide, said despite the legislation passed in the House of Commons in April demanding that perpetrators be prosecuted, “no-one has been brought to justice”. He called this “a shocking indictment of the international community’s failure” to uphold international conventions on religious rights and genocide prevention.

Speaking before the event, the Patriarch told World Watch Monitor that Saudi influence had increased in Syria before the civil war, through the building of mosques and schools and exporting radical imams. He noted that Wahhabism “has very little room for non-Muslims” and said that for the social fabric of Syria to be repaired once the war ends, school textbooks would need to be revised to teach tolerance and acceptance of “the other”. He said they should also teach that Christians have existed in Syria since the earliest days of Christianity, answering the extremists’ charge that their faith makes them “foreign” to the region.

The Patriarch criticised Western governments for being too “soft” on the Saudi government, which he linked to the actions of extremists radicalised by Wahhabism. “The West is concerned more about its economic interests and business dealings with Saudi than the persecution of minorities or killing of Christians … The British, the Americans are not putting pressure on Saudi Arabia … because their oil deals apparently are more important than the other things.”

He called on Western governments to insist on reciprocity – pressuring Riyadh to allow churches to be built in Saudi Arabia, given that Saudi religious institutions are allowed to build mosques in the West.

In his talk during the report launch, the Patriarch called for the establishment of special tribunals to ensure that extremists who have committed atrocities against Christians and other minorities in Syria and Iraq “pay for their crimes so others will be discouraged” from imitating them.

He also urged Western nations to exercise caution in recognising militant groups operating in Syria as “moderate opposition”. “Who is moderate and who is not moderate?” he asked. He criticised Western media coverage of the Syrian civil war for being “one-sided” and not reporting attacks by rebels on Christians in the government-held areas.

In the search to understand the motives for the recent jihadist attacks in Europe, he said it was vital “not to permit the fatal mistake of justifying the wrongdoer”: they were designed to “eliminate religious diversity”, he said. Making excuses for the wrongdoers would “permit them to do even more massacres and encourage future fanatic religious groups. Freedoms that have not been defended will be abolished and darker ages will come and wipe away centuries of civilisation,” he told the audience, which included MPs and peers, Anglican, Catholic and Orthodox bishops, and representatives of the Jewish and Sikh communities.

Dr. Sarah Bernstein, an Israeli Jew who runs a Jewish-Christian dialogue centre in Jerusalem, suggested that religious hatred could be the product of manipulation by external forces. “The deep connection between religious identity, cultural identity and national identity means that religion plays an important role in our region and can be manipulated by those wishing to fan the flames of fear and violence,” she said.