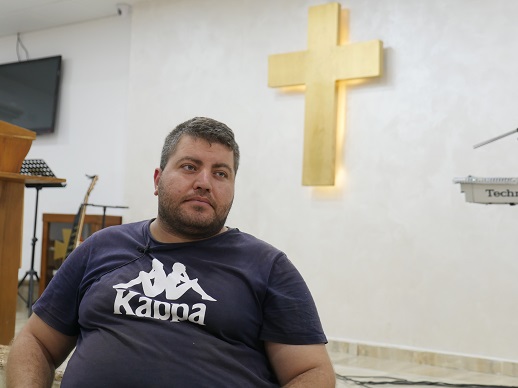 Islamic State
jihadists hung Karlus, 29, from the ceiling of the jail he was held in, by a rope attached to his left foot. As blood poured from his foot, they beat and kicked him, rubbing salt into his wounds.ADF International

Islamic State (IS) jihadists hung Karlus, a 29-year-old cook, from the ceiling of the jail he was held in, by a rope attached to his left foot. As blood poured from his foot, they beat and kicked him, rubbing salt into his wounds. He was sexually abused in prison by three women wearing niqabs. He was told he would be shot dead; but for reasons he still does not understand, on the day his execution was due to take place, 26 September 2014, he was released.

When IS seized control of Iraqi territory in the summer of 2014, they gave Christians, as “People of the Book”, four options: leave, convert to Islam, pay a protection tax (jiyza) or be killed. The vast majority fled – an estimated 120,000 in a few short weeks that summer. But those left behind were subjected to torture, forced conversion, sexual slavery and even crucifixion, according to testimonies collected from Iraqi refugees in Jordan by the religious freedom charity ADF International.

Karlus told its researchers he had been unable to flee his home in Batnaya, a village outside Mosul, because he was looking after his disabled father. When the terrorists came to his house, they destroyed a cross and a picture of Jesus.

“They even destroyed a piece from the Quran that was given to me by a friend,” he said. 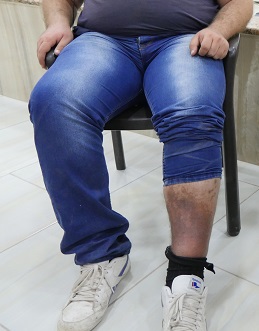 Karlus was
treated in Spain for the injuries to his leg.ADF International

Karlus was taken to a police station unconscious after retaliating when one of the jihadists hit him in the face. There began his seven-week ordeal at the hands of IS, after which he fled to Kurdistan, was treated in Spain for the injuries to his leg, and sought asylum in Jordan. Unknown to Karlus, his father had meantime managed to travel to Baghdad, but died there in August 2015.

Esam, a father-of-three from outside the town of Qaraqosh, said two of his wife’s relatives had not managed to flee Qaraqosh before IS arrived. They were abducted; the husband has not been heard of since and the wife “now lives with one of the Daesh [IS] amirs“. While reports have focused on Yezidi women being taken into sex slavery, Esam’s account suggests that Christian women and girls may have been targeted as well.

“We heard of 12 Christian girls who are with Daesh. They may be more. Our bishop told people not to tell if they lose their girls: it is a shame on the family,” he said.

Karlus and Esam are among the thousands of Iraqi Christians who have sought refuge in neighbouring Jordan. While Iraqi and Kurdish forces and militias, with US and UK air support, are embroiled in the push to liberate Mosul from IS, many Christians from the city and its surrounding villages are too traumatised by their experiences to countenance returning. Some say they feel betrayed by neighbours who supported IS, and are no longer sure whom they can trust. Instead, many have applied for asylum in Western countries such as Sweden, Canada and Australia.

One family recovering in Sweden is that of Esam’s brother-in-law.

“My wife’s brother was crucified by Daesh,” Esam said. “He was crucified and tortured in front of his wife and children, who were forced to watch. They told him that if he loved Jesus that much, he would die like Jesus.”

Esam said the fighters tortured his relative from 6pm until 11pm; they cut his stomach open and shot him before leaving him hanging, crucified.

My wife’s brother was crucified by Daesh. He was crucified and tortured in front of his wife and children, who were forced to watch. They told him that if he loved Jesus that much, he would die like Jesus.

“A Swedish organisation helped his wife and the children; they are now in Sweden.” He added: “His wife has cancer.”

In the ongoing instability in Iraq, Christians are not necessarily safe even if they escape areas held by IS. Baghdad has been home to the country’s largest Christian community for decades, but numbers have plummeted as sectarian militia violence sporadically ripped the capital apart and targeted non-Muslims in the wake of the 2003 US-led invasion. Twice in 2014, Alaa, a father-of-two living in the city, received death threats. The first was by phone; the second time, “someone wrote on our door, ‘Your day is coming to die, you infidels'”. Alaa knew these were no empty threats.

“My wife’s cousin was killed in 2010, in an explosion at a church. Another family member was abducted in 2009,” he said. The family left Iraq in November 2014 and flew to Jordan to register as refugees.

Amid the ongoing violence and political instability in Iraq, Alaa sees little future for his family. “It is impossible to go back to Baghdad,” he said. “It is not possible to go back to Iraq. I can’t build a life there. I hope to go to Australia, but any country that will accept me, I will go there. I want to build a life and a future for my children.”

Some of the damage done by IS has already begun to be reversed. Esam said friends of his who escaped Mosul after being forcibly converted to Islam had been “baptised back to Christianity”. Other aspects will take far longer. Iraqi Christians who end up returning to Iraq know they return to a country whose sectarian fault-lines have been activated to lethal levels. Aid workers have warned that extensive reconciliation work will be vital if Iraq’s many different faith and ethnic communities are to cohere again, especially as levels of trauma among all sectors of the population are thought to be extremely high. In Jordan, Karlus reflects on his ordeal at the hands of IS members in Mosul.

He concludes: “What happened is not easy, but in the end we must forgive. This is my destiny; maybe God is planning something for me.”