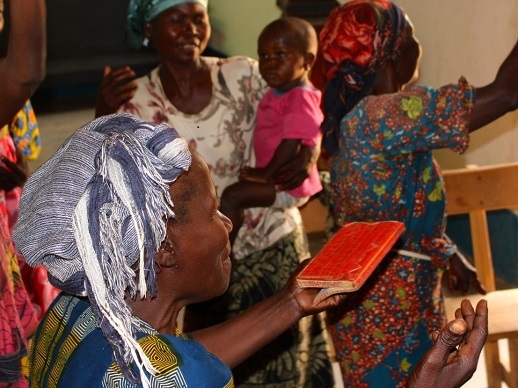 The slogan painted on the rear bumper of a yellow taxi in Bangui caught our eye: “Le Saint-Esprit me conduit” (the Holy Spirit drives me). For a trip to this French-speaking part of Africa, it was an admirable sentiment that felt both reassuring and disconcerting.

It is not unusual to see Bible verses emblazoned across a taxi’s rear bumper in this majority-Christian country.

(CAR was plunged into turmoil in 2013 when mainly Muslim rebels from the Seleka ‘alliance’ group seized power. The ensuing chaos and anarchy turned CAR into a failed state. Christians were specifically targeted with assault, looting, rape and murder; the violence was characterised by attacks that singled out women).

In Bangui, now feeling inspired by the Bible verse, my guide Céline* had run across the road to catch this particular vehicle as we set off to visit a small women’s self-help group across town.

Dozens of small self-help cooperatives have been established, acting as both private financial savings programmes and micro-commerce societies, where a group of friends jointly save money to lend to each other for business growth.

A friend of mine, Annabelle*, and I were there to learn more about how these self-help groups were experienced by some of the hundreds of women who were signing up for them.

Soon our taxi left the cratered tarmac of the main roads to bounce along one of the dirt roads leading to the residential areas. We soon arrived in a good neighbourhood, with drainage ditches cut along the side of roads and between some of the homes. Our driver wasn’t keen on risking the wobbly planks across one of the flowing ditches near the church, so we got out and walked along the ochre dirt paths that wove between mudbrick homes. We were here to meet Diane*, the president of the local self-help chapter.

Diane welcomed us to the church – a one-room sanctuary reminiscent of so many in this part of CAR where the year-old group met. Annabelle, Céline and I were given the honour of sitting at the front – in the only seats with cushions and back-rests. Baskets of peanuts and bottles of fizzy drinks were offered to us. This was Central African hospitality, which said both “welcome” and “you are our esteemed guests”. As usual it made me uncomfortable that we were offered refreshment while the dozens of women in front of us had none. 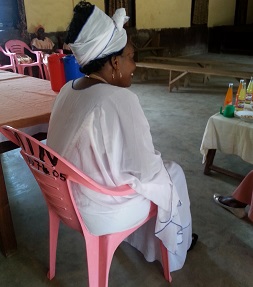 Diane settled into a bright pink, plastic garden chair near us.  It was one of a dozen set out at the front of the church. This was unusual. The well-used wooden benches that we could see further back were more typical of the furnishings in churches. We admired these new-looking chairs, which provoked exclamations of delight from Diane and the others. We’d inadvertently noticed the group’s first money-making venture.

Diane explained: “We took all of our savings from the first eight months and bought these chairs for 1,000 CFA each [about 1.6 US dollars]. That’s a lot, but now we rent them out for 100 CFA per day per chair. It’s a scheme that allows us to make money without having to make further investment. They’re in demand from churches and families for weddings, funerals and parties. The profits go straight into our joint savings box.”

Candice*, a member of the group, explained her trepidation about joining: “I wasn’t sure I could really meet the weekly contribution, but I wanted to try. My family and I started making small things to sell at the market. Soon we had enough not only to make the weekly contribution, but we also had extra that we could use to eat something better than cassava [a staple source of carbohydrate] in the week.”

Others told their stories about how they had lost their livelihoods and business capital when the armed groups came through Bangui, and then how they had turned to mini-micro commerce activities in order to survive, and, more recently, to be an active part of the self-help group. Some of the women had extra mouths to feed since they had taken in some of the many orphans that the fighting had produced.

Others, like Joanne*, had fewer mouths to feed – two of her six children had died of disease while in a refugee camp. She kept her eyes on me for the whole meeting, as if she were daring me to take her life lightly.

When I was shown the group’s accounts books, I asked why they stopped in October 2015. “We had to flee again,” said Diane, referring to the disruption to their lives caused by the conflict. The most recent wave of violence in Bangui had only been months earlier. I knew of this as a news fact, I just hadn’t connected the information with the implications for the individuals in front of me.

The disruptions meant their lives were a continual series of re-starts. If it was not easy to build a life and a society in the first place, it was even harder to re-build. And it took an almost super-human effort to continuously find the will to start again, just to get back to where they had been years ago, before the conflict started. But this brave group of women was willing to do just that again. Their only frustration at the moment was that they hadn’t yet managed to motivate the other women in their church to start their own group. “But we’ll keep trying!” said Diane.

To close the meeting in prayer, the pastor’s wife stood and raised her voice, “Heavenly Father, thank you for this time together, for the mission which brought us a means to feed ourselves and our guests. Thank you for the visit of our sisters from far beyond our borders. Lord, at this moment we do not see them standing in our midst; it is not them but You that we see and feel here, Your very presence, come among us. Thank you, Lord, for remembering us and being here.”

*Names have been changed for security reasons

Hélène Fisher is Women-to-Women Coordinator at Open Doors International, which supports the project she visited. She has also written Gender-based violence ‘wielded mercilessly’ in Muslim countries and Vulnerability of women exploited to jeopardise Christian communities for World Watch Monitor.