Over the Christmas weekend, more than 40 people were killed in the city of Beni and neighbouring communities in the Democratic Republic of Congo (DRC).

Now a new report by the UN Panel of Experts on the DRC sheds new light on the presence of Islamist militants, which has caused havoc in the eastern province of North-Kivu over the past few years.

Numerous foreign armed groups, including the Allied Democratic Forces-National Association for the Liberation of Uganda (ADF-NALU), are responsible for “widespread violations of human rights and international humanitarian law”, says the report.

ADF-NALU was originally rooted in a rebel movement to overthrow Uganda’s government and replace it with an Islamist state, but was forced to re-locate over the border into DRC. The group has been trying to uproot Christians from the north-east area of DRC through attacks, rape, looting, kidnap and murder – on an almost weekly basis.

According to local NGOs, the violence claimed 1,116 lives between October 2014 and May 2016. Another 1,470 people were abducted in that period, they say, while more than 34,000 families were forcibly displaced.

The UN’s January report, based on field visits, interviews and access to first-hand documents, provides a rare insight into ADF’s structure, activities and strategies.

ADF militants operate in small groups and in disparate locations, with limited central command and control, the UN Experts learned. Interviewed ex-combatants cited commanders including a man called Seka Baluku, says the report. He appears to be the second commander after Jamil Mukulu, who formerly led one faction but was arrested and deported to Uganda.

ADF combatants in his Baluku group referred to their largest grouping of camps as “Madina II”, made up of three camps: Whisper, Headquarters and Bayt al-Mal, along with defensive positions set up around the perimeter and on footpaths.

The number of combatants there is between 200 and 300, including men, women and children, the report says.

Joint FARDC (Congolese army) and MONUSCO (UN peacekeeping force in DRC) operations led to the capture of the camps in mid-May and again in mid-September 2016, recovering documents and finding a system of bunkers.

According to ADF combatants, the bunkers in Madina II had been dug for protection from aerial and artillery attacks and to avoid detection by MONUSCO drones.

In other ADF camps, the bunkers were also used as prisons, ADF combatants revealed.

They also talked about a training camp, called Miba, in the Mwalika area, 30km south-east of Beni. The recruits come from the DRC, but also neighbouring Rwanda and Uganda. They are either enrolled by force, or attracted by the promise of a better life.

Local sources contacted by World Watch Monitor said new recruits are being paid “$450 per month and $250 per murder”.

Such incentives, along with continuous raids and kidnappings, help to explain how the group compensates for battlefield losses and desertions, said the UN report.

A previous report, ‘Who are the killers of Beni?’, published in March 2016 by the Congo Research Group, an independent group linked with New York University, accused the Congolese army of passivity and complicity. That report said that in addition to commanders directly tied to the ADF, members of the national army and local militias have also been involved in attacks on civilians.

The UN Experts also learned that, as of mid-2016, the Baluku group had sufficient weapons to arm each combatant: its arsenal included Kalashnikov rifles, but also light machine guns and grenade launchers.

Attacks on civilians in Beni territory

According to ex-ADF combatants, the Baluku faction had been responsible for two attacks near Beni in July 2016, which between them claimed 11 lives. They said the logic for both attacks was finding supplies, especially medicine.

Local bishops and civil society have repeatedly denounced the resurgence of violence still carried out in the name of ADF-NALU, but which has now taken the form of a jihadist organisation.

In a letter released in May 2015, the Bishops of the Province of Bukavu (eastern DRC) denounced a “climate of genocide” and the passivity of the Congolese State and international community.

“Does the situation have to deteriorate even more before the international community takes measures against jihadism?” asked the Bishops, according to whom “a strategy of forced displacement of populations is taking place in order to gradually occupy the land and install outbreaks of religious fundamentalism and terrorist training bases”, the Catholic news agency Fides reported. 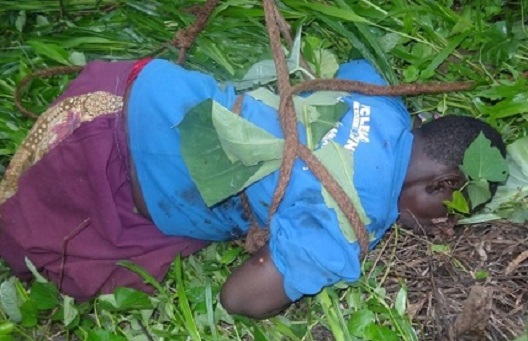 The UN Experts also got access to documents recovered by FARDC in Madina II, most of which were in Arabic.

Life in ADF camps is regulated according to Islamic law, they showed. The documents mentioned harsh punishments: between 60 and 500 lashes for acts such as leaving a camp without permission or talking during prayer.

In reaction to the UN report, a local Christian missionary, who wished to remain anonymous, told World Watch Monitor that he thinks the aim of Islamic missionaries to install a caliphate between Beni, Eringeti and the border of Uganda has been achieved.

“It is too obvious when looking at the evidence or even just a map of the gigantic area of eastern Congo cleared out of poor Congolese Christians and now occupied by foreign Muslim invaders: their goal has been achieved,” he said.

“They now have a Muslim caliphate under Sharia Law, built on the blood of innocent Christians who used to live peaceably and farm there.”

Mineral resources, of which eastern DRC is replete, continue to fuel the conflict, noted the UN experts. Gold remains by far the most used mineral for financing armed elements and criminal networks.

The UN Panel’s preliminary investigations showed that most gold produced in the country continued to be smuggled through neighbouring countries to Dubai.

Moreover, despite recurrent Army raids and a heavy UN presence – MONUSCO is the largest UN peacekeeping mission, with 20,000 troops, including a special brigade aimed at tracking rebels – ADF is still active in eastern DRC. The group continues to recruit, train and operate in the dense forest east of the Eringeti-Beni-Butembo axis, causing serious insecurity for civilians in the area, according to the report.

Catholic charity Aid to the Church in Need (ACN) has also given access to a variety of materials that show the nature of ADF camps. The materials show soldiers wielding rifles, watching over the children – aged nine to 15 – in military outfits, and carrying out military exercises.

“The sudden emergence of the jihadist camps is being linked by ACN sources to UN peacekeeping forces, with concerns that the UN forces are complicit with the camps and that they are intentionally failing to take action against them,” said Maria Lozano, ACN vice-director of communications in August 2015. “It is alleged that some members of the Mission of the UN Organisation for the Stabilisation of DR Congo are fundamentalist Muslims from Pakistan who in their spare time are setting up Qur’anic schools and working on mosque construction sites.”

The UN report concluded that ADF camps captured during previous operations by army and MONUSCO have later been abandoned by the Congolese army, after which ADF returned to them and, as of mid-October, was still occupying the camps.

The Democratic Republic of Congo, which is 95% Christian, is one of the countries to ‘watch’ – in case conditions get worse – for the 2017 World Watch List of the 50 countries where it’s most difficult to live as a Christian. The report is produced by global Christian charity Open Doors.