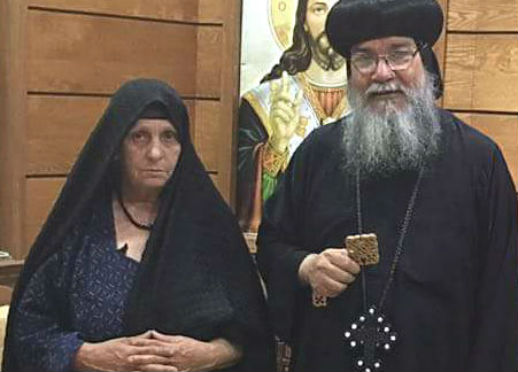 The case against three men accused of publicly stripping naked a 70-year-old woman has been reopened.

A month ago today (17 January), charges were dropped against the three men over a reported lack of evidence, despite a public apology from the President and the woman, Soad Thabet, identifying the three men.

After the charges were dropped, Mrs Thabet told The Telegraph she felt “let down for a second time”.

However, the case against the three men has now been reopened, following an appeal by Mrs Thabet’s legal team, who claimed that witnesses had gone back on their original testimonies after being threatened.

Writer and journalist Soliman Shafiq told the Coptic newspaper Watani that the case “perfectly mirrored the bitter struggle between the tribal fundamentalist forces in rural Egypt and the liberal civic forces” and called the decision to reopen the case a “victory” for civic forces.

Egyptian authorities have dropped the charges against three men accused of publicly stripping naked a 70-year-old woman, following rumours her son had had an affair with a Muslim woman.

The authorities cited a “lack of evidence”, despite a public apology from the President and the woman, Soad Thabet, identifying the three men.

World Watch Monitor published witness accounts of the attack, which took place in June. An Egyptian bishop, Makarius of Minya (300km south of Cairo), called for “justice”, rejecting the practice of extrajudicial “conciliation meetings” that have long pressured Copts to give up legal rights. For a woman from an especially conservative rural culture, the trauma was particularly severe, and the attack hit global headlines.

“I feel let down for a second time,” Mrs Thabet told The Telegraph. “I feel that nobody is standing by our side.”

“I was hoping that they will be punished. The people who comfort me say that Jesus was himself stripped naked. Now, I complain only to God, and hope he brings justice. Is there anyone stronger than God?”

Meanwhile, Thabet’s son, Ashraf, who faces charges of adultery with Nagwa Ragab Fouad, is due in court later this month. Mrs Fouad, estranged wife of the man accused of whipping up the village against Thabet’s family, has denied – on national TV – any sexual relationship with the Christian.

Ashraf Thabet said: “If the law stands by the side of the culprits and the victim becomes culprit, then nothing will stop [them] from attacking us in the future.”

A Coptic bishop has urged full recourse to law to punish those behind an attack in Minya, Upper Egypt, which saw the 70-year-old mother of a man rumoured to have had an affair with a Muslim woman stripped naked in public view.

She and another Coptic woman were at the very least injured, while five homes were also burned when angry villagers ran amok after the rumoured affair between Ashraf Attiya, a 31-year-old Coptic trader, and a married Muslim woman, Nagwa Ragab Fouad.

Fouad, already estranged from her husband, Nazir Ahmed, strongly denies the alleged affair, insisting Ahmed spread the rumour to be able to get a free divorce, denying her her legal rights.

Bishop Makarius of Minya (300km south of Cairo) this week reiterated his call to bring the attackers to justice, rejecting the practice of extrajudicial “conciliation meetings” that have long pressured Copts to give up legal rights.

“The law should take its course until the perpetrators are brought to justice,” said Makarius of the attack in the village of al-Karam on Friday 20 May.

‘I was completely stripped’

Threats against Copts, including the Attiya household, became apparent from 18 May. When the priest of a nearby village raised the issue with the authorities, he was given false assurances.

Soad Thabet, the alleged lover’s 70-year-old mother, told a local TV chat show: “On Friday [20 May], sometime in the evening, our home was stormed. They beat my husband severely. When I started screaming, they dragged me out into the street.

I wish they had only beaten me, but not stripped me entirely naked as they did

“They repeatedly beat me and stripped me of all my clothes. They left me as naked as the day I was born.

“They were heavily armed, no-one dared approach me to help.”

Thabet and her husband were forced to leave the village, home to around 1,000 Christians among 30,000 Muslims, a place without a single church to serve the community.

Faced with specific threats, her son, Ashraf, had a week earlier fled the village, together with his wife and four daughters.

For a woman from an especially conservative rural culture, the trauma was particularly severe.

“I wish they had only beaten me, no matter how hard, but not stripped me entirely naked as they did,” said Thabet on TV.

A worse fate was averted by a Muslim neighbour’s act of courage.

Ramadan Kamal, living across from the Attiyas, risked his safety to take her into his home.

World Watch Monitor learnt that Thabet was whisked upstairs, where she was moved across adjoining rooftops to a Christian man’s home, thus averting a full parade, naked, around the village streets.

Fearing violence due to the brewing rumour, Thabet had reported the threats to the police a day earlier (Thursday). 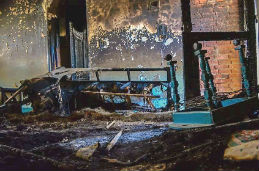 The police did not move. “Not a single policeman or guard was posted,” said Thabet on Dream TV’s ‘More Talk’ show.

Again on the morning of Friday 20 May, the family approached the police for help, stating they were in clear danger after their home had been ransacked the night before, in their absence.

“The police chased us out of the police station. They said we were troublemakers,” said the elderly woman.

Thabet was stripped naked later on Friday evening. She went back to the police station the same night.

“The complaint I filed earlier on Thursday was not found. The police then claimed I never reported anything,” she said.

It’s said to be no fire, but someone lighting candles to celebrate a birthday party!

By the end of the day tens of thousands of pounds’ worth of Christian property had been lost, but even greater damage had been done to the Christians’ morale.

Thabet blames jealousy of the family’s relative wealth as the reason behind the “adultery” rumour.

Meanwhile, Nagwa Ragab Fouad, estranged wife of the man accused of whipping up the village against Ashraf’s family, has denied any sexual relationship with the Christian.

“Before this whole thing was trumped up, I’d asked for a divorce. He [Ahmed] has raised this whole thing up in order to deny me all legal rights,” said Fouad on national TV. “God is my witness, there is nothing at all between me and Ashraf.”

She added that her husband implicated Ashraf in an alleged affair with her because both he and Ashraf were business partners and had fallen out.

After the assault on Thabet, Fouad went to the police and reported her husband.

The incident had whipped up emotions on social media before it eventually found its way to mainstream world attention. Coptic Pope Tawadros II echoed the call for “law to be enforced before conciliation can take place”.

Egypt President Abdel-Fattah el-Sisi condemned what he termed an “offense against an Egyptian woman”, but failed to identify the victim as Christian. He vowed wrongdoers will be held accountable “no matter how numerous”.

Currently 10 suspects remain in jail, pending charges. Seven have been released. Among those still detained is Ahmed.

Despite repeated calls, so far no-one has been sacked from the police or local government.

Over the years, Copts have been subjected to repeated mob attacks. Despite the predictable nature of such attacks, remedies – if any come – are often “too little, too late”.

Among those are “conciliatory meetings”, described by Bishop Makarius as “highly detrimental” to Coptic rights. Such settlement outside the law corners the victims into accepting “humiliating terms”, he said.

“Often the spectre of ‘consequences’, or ‘dangers’ to our children and our businesses, is raised in order to force us to such settlements,” said Makarius in an interview with Coptic CTV channel late last month.

Meanwhile, liberal Egyptian journalist Ibrahim Issa is not upbeat about the possibilities of change.

“Rather than dealing with the issue transparently, everyone is called upon to stay silent,” says Issa, a Muslim.

“The modus operandi is such that were a fire raging next door, you’d be urged not to raise the alarm,” he added, on a popular private TV show. “Rather, it’s said to be no fire, but someone lighting candles to celebrate a birthday party! It’s a state of denial.”

Bishop Angaelos of the UK Coptic Orthodox Church added his voice to that of his fellow Bishop in Minya:

“Days after having been stripped and dragged through the streets of her village in the most undignified and inhumane of ways, the gracious and forgiving response of Soad Thabet … is both courageous and inspiring.

“The ethos of the Coptic Christian community in Egypt has always been one of forgiveness, as was particularly evident in its peaceful and reconciliatory response to the burning of over one hundred churches and places of ministry in August 2013, and following the brutal execution of 21 Coptic Christians in Libya last year. Having said that, there is currently a rejection of conventional ‘reconciliation meetings’ based on the fact that they have historically been used as a cosmetic short-term solution, without addressing root causes or preventing the recurrence of similar incidents. Despite an ongoing commitment to genuine reconciliation efforts, there is an immediate and pressing need for tangible solutions, as superficial measures that aim to pacify will by no means have a lasting effect, and can never lead to true reconciliation and social cohesion.

“It is indeed shameful that such mob crimes can be perpetrated against innocent communities or individuals, of whatever faith or ethnicity, and especially as a result of slanderous and unsubstantiated allegations; and that an elderly woman could be so publicly and indecently humiliated. What is also unacceptable is the utter disinterest (at best) and/or complicit and criminal negligence (at worst) with which the local security services conducted themselves, and the Minya Governor’s initial denial that these crimes actually occurred.

“In light of this, President Sisi has expressed a need for fair and transparent investigation, and amidst allegations that those apprehended for these crimes have been released on bail, the hope is that measures to safeguard every Egyptian citizen, irrespective of his or her chosen faith or belief, will indeed be effectively implemented.

“As I commented last week, Egypt is at a formative stage of its contemporary history, which requires a robust system of law and order that underpins an ethos of equal citizenship and accountability. Any such steps taken at the national level, however, are severely hampered and undermined by these recurring failures at the local level.

“Little can possibly be done to compensate the unprovoked injustice suffered by an innocent elderly mother in rural Egypt, but we continue to pray for peace and for the hearts and minds of the perpetrators to be changed, paving the way for true reconciliation”.