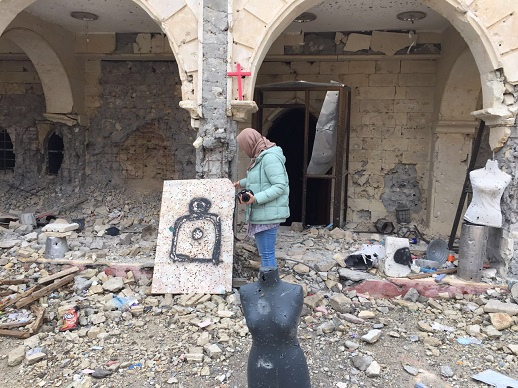 Dr. Sarah Ahmed
at the cathedral in Qaraqosh, where IS appeared to have used mannequins looted from a local tailor’s to practise shooting.FRRME

Efforts to clear villages liberated from Islamic State are undermining the possibility of recording the atrocities to people and heritage committed there, according to a leading Iraqi aid worker.

Dr. Sarah Ahmed, director of projects for the UK-based Foundation for Reconciliation and Relief in the Middle East, last month visited a number of towns and villages in the Nineveh Plains area around Mosul that had been home to thousands of Christians until Islamic State jihadists chased them out in the summer of 2014.

“I was shocked,” she said. “The houses were so burnt, in a weird way; their structure was compromised.” Dr. Ahmed, a Muslim who has earned the trust of Iraqi Christians, said she believed that IS had used explosives in Christians’ homes in order to render the areas formerly lived in by non-Muslims uninhabitable “for a long while”.

However, she voiced concern at the work that was already under way, which she was told was being done by local government officials.

She described finding graffiti in a church. “You shouldn’t [remove it] until the world knows what has happened to all these places,” she said. Likewise, she said the Yezidi city of Sinjar has been destroyed by IS; there is no food or transport and only around 130 families are living there now. Documenting the damage, as well as the incidences of rape and trafficking of women by IS, is incredibly important, she said.

Dr. Ahmed also expressed her sadness at seeing the cathedral in Qaraqosh, where IS appeared to have used mannequins looted from a local tailor’s to practise shooting. The cathedral courtyard was strewn with bullet casings. “A church is a holy place,” she said. “I kept thinking: how many people died here? You wouldn’t even know – the walls are all black and burnt.”

Dr. Ahmed said she believed that many Christians did not want to return to their villages, having lost their homes and, in some cases, feeling betrayed by neighbours who did not protect them. However, she said those who did want to go back would need protection, and funds for restoring their properties, having exhausted their savings while living as IDPs in Iraqi Kurdistan.

The US Holocaust Memorial Museum in New York has begun documenting atrocities committed by IS against northern Iraq’s minority populations. Its 2015 report found the group had “perpetrated crimes against humanity, ethnic cleansing, and war crimes against Christian, Yezidi, Turkmen, Shabak, Sabaean-Mandaean, and Kaka’i people in [Nineveh] Province between June and August 2014.”