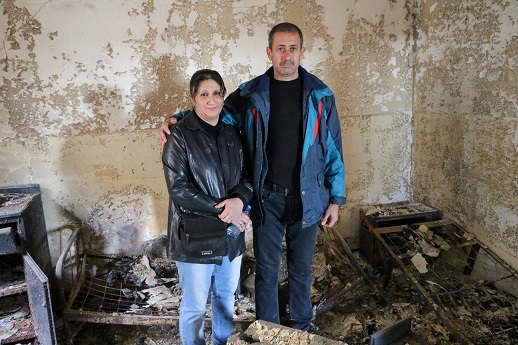 Almas and her
husband, Hathem, stand inside the remains of their house, destroyed by IS, Jan 2017.World Watch Monitor

Hathem and Almas are hoping to be among the first people to return to Karamles, a now-deserted town in the Nineveh Plains of northern Iraq.

“This is our town, where I always lived. I would like to sleep here every day,” says Hathem, who fled with his wife to Erbil when Islamic State (IS) invaded Karamles as part of its August 2014 offensive.

But the Christian couple’s hopes are unrealistic. Although liberated from IS occupation in October 2016, a walk through the town shows why no-one has yet returned.

There are four reasons:

According to Father Jacoub, a visiting priest from Bartella, another liberated village in the Nineveh Plains, “There needs to be guaranteed security, not only on a local level but nationwide.”

He remains hopeful that people will return, now that Iraqi government forces have retaken the area and removed what he calls the “dark cloud” that covered the Christian villages during IS occupation.

2. Continued military and militia presence in some residential areas

The Nineveh Plains are very close to Mosul, still partially in the hands of Islamic State, and some areas remain out of bounds to civilians.

There is no electricity or water supply – pumps stopped working and there is no access to wells – and there are no shops for even basic provisions.

IS soldiers set fire to property as they pulled out during the liberation. Many houses collapsed, some are just shells, and families can’t always afford to rebuild them. Father Jacoub says that there is no logic in going back yet.

A glimmer of hope is the Centre for Support and Encouragement, being created by Father Thabet, a colleague of Father Jacoub. Although not yet open, it will be a place where people can stay while they restore their homes. He plans to buy a generator to give people power for their tools and machinery, and will supply visitors with free bottled water.

Hathem and Almas, both in their 30s, are members of Father Thabet’s church. Hathem has been helping the priest with his initiative. The couple bump into Father Thabet and reflect on what happened to Karamles as they walk through some of its ancient streets.

The town of 10,000 people – 6500 families – emptied almost overnight as people fled the jihadists. Looking to the sky, the three see fighter jets as they make bombing runs on IS positions in Mosul, just 20 miles away. They hear the explosions, and see the thick black smoke.

Hathem and Almas show Father Thabet round their former home, now just a blackened shell. They collect a few of their charred belongings in plastic bags. 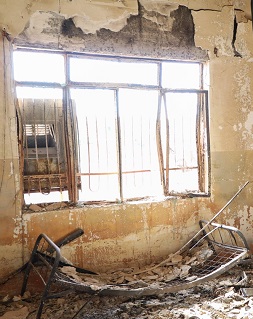 A buckled
bedframe is all that remains in the couple’s bedroom, Jan 2017World Watch Monitor

The couple lived here with their six children and Hathem’s three sisters. They stand in what was once their living room. Everything is black and still smells of smoke. “We had sofas over there,” Almas says, “and beautiful pictures on the walls”. She says it with little emotion, although admits that “somedays I laugh, other days I cry”.

“That was the pram,” Hathem says, pointing to an iron frame. In a bedroom upstairs, only a steel bedframe survives, distorted from intense heat.

Hathem, an experienced builder, knows the house cannot be restored. “The fire has destroyed the structure of the floor; it isn’t safe. The fire must have been strong,” he says.

Outside the house, Hathem explains that he used to keep beehives and points to where he grew flowers. He’d lived in the house since 1988. He says he doesn’t have the money to restore it. “This is all lost because of an ugly war,” he says. 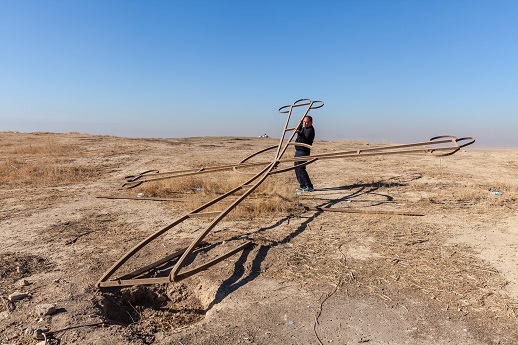 Before leaving Karamles to drive home, Father Thabet points out the cross he raised on a nearby hill as a beacon of hope. “Maybe I will replace it with a much bigger cross,” he says. “The people should see that Karamles is a Christian village.”

Some Christian families have started returning to homes once occupied by IS. In the eastern parts of Mosul at least three Armenian families have returned to their houses despite the insecurity caused by the ongoing fighting there between IS and Iraqi forces. Also a Chaldean Catholic family returned to Telskuf in January. Naoiq Quliaqus Atto, his wife, brother and three children were welcomed by Father Salar Bodagh, a local priest in charge of the reconstruction committee, who said: “This is a real sign of hope for many more.”

Global charity Open Doors, with others, has produced a detailed report on the vital contribution that Christians make in Iraq. The report’s co-ordinator, Rami*, (not his real name) said: “We need recognition for the vital role of the Church in rebuilding and reconciliation… Maintaining the presence of Christians is not only about them; it is for the good of society as a whole. In the reports and research we’ve conducted, we have mapped, in a way, all the contributions Christians have given to Iraq.”

The way that Open Doors is tackling these issues, Rami told World Watch Monitor in November, involves working with indigenous church leaders, engaging with governments and decision-makers across the globe, and trying to collect One Million Voices in a petition in support of a campaign to bring “Hope to the Middle East”.