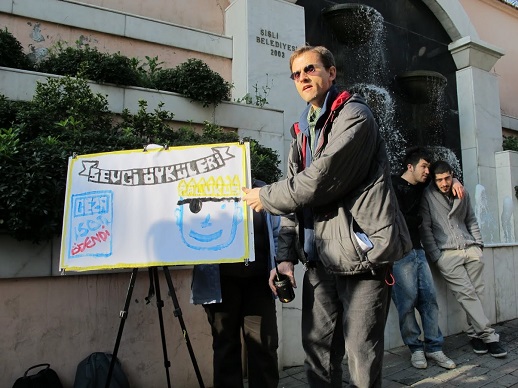 Turkey’s Constitutional Court intervened promptly this week to block temporarily the pending deportation and re-entry ban ordered against a US citizen active in Christian ministry in Turkey for the past 17 years.

Without the high court’s provisional ruling, Canadian-American David Byle would have been the fourth American Christian with long-term residency in Turkey to have been ordered out of the country in the past six months. All four have been charged with posing a “threat to national security”, without any explanation.

One of the four, pastor Andrew Brunson of the Izmir Resurrection Church, was detained on deportation orders on 7 Oct., but then, after two months without explanation or access to a lawyer, accused by the government of links with what it says is an armed terrorist organisation. He was sent to prison on 9 Dec., with his lawyer still refused access to the alleged evidence filed against him, apparently under emergency-law restrictions in place after the failed coup attempt against the Turkish government in July.

The other two, pastor Patrick Jensen in Gaziantep and refugee aid worker and academic Ryan Keating in Ankara, were both deported and banned from returning in August and October, respectively.

But on Byle’s deportation case, the highest legal body for constitutional review in Turkey responded within hours to an urgent appeal from Byle’s lawyer on 13 Feb.

“I was honestly surprised when they issued a decision on my eight-page appeal  by the end of the same day,” advocate Isil Cetin told World Watch Monitor, noting that such appeals often take up to two years to be processed.

The high court’s response suspended Byle’s deportation-order until specific “information and documents” were produced to document the accusations that he was a director, member or supporter of any “terrorist organisations” or a threat to public order and security.

Cetin had learned in mid-January that an Istanbul Administrative Court had on 25 Nov. rejected her client’s last appeal against an Interior Ministry directive ordering his detention, deportation and ban from re-entering Turkey.

The lower court concluded in its written judgement that Byle’s activities, described as dissemination of Christian propaganda “exceeding the usual  levels of religious rituals”, could be perceived as a threat or attack aimed against an individual or groups from other religions.

Accordingly, on the basis of maintaining public order and security, as defined in Article 54 of the Law on Foreigners and International Protection, the court denied Byle’s visa appeal.

A decade of legal battles

Byle has been under the spotlight from Turkey’s Interior Ministry for the past decade, ever since he was first arrested in April 2007 doing street evangelism in Istanbul’s Taksim district with two Turkish Christians and a Korean national.

The official police report accused the four of “missionary activity, disturbing the peace and insulting Islam”. The two Turks were released within hours, but Byle was detained for another two days, and the Korean deported.

Eventually, over the next seven months, the local court dropped all three criminal charges against Byle, noting that missionary activity is legal in Turkey and that their literature did not slander Islam.

But in November 2009, Byle was again briefly detained with several other Christians stopped by police while sharing their faith in Istanbul’s Pendik district. On the basis of that incident, four months later he was without warning arrested late at night from his home for immediate deportation. But because Turkish laws require prompt attorney access to foreigners and court approval for their legal deportation, Byle’s lawyer blocked his deportation until the courts ruled on the case.

Those court investigations concluded in April 2011, ruling that Byle had not committed any crime, and that in fact his religious activities were in accordance with the stated purpose and constitution of the association he had legally helped to found, the Association for the Propagation of the Bible. Registered by the Istanbul Governate in 2009, the association had first begun in Turkey in the 1960s, when it became known locally as the Bible Correspondence Course.

That court’s decision stated that the Interior Ministry had ordered Byle’s forced removal in violation of the law, and cancelled his deportation order.

But over the next two years, the Turkish authorities refused to renew Byle’s residence visa, giving no explanation. So at his lawyer’s advice, Byle returned to the United States in December 2013 and applied there for a three-month tourist visa through a Turkish Consulate.

Upon his return to Turkey in January 2014, he reapplied for his residence visa. Once he did that, he could remain legally until it was approved. But he again received no response, leaving him in legal limbo until 6 April, 2016, when he was summoned to Istanbul immigration authorities. There he was informed that the Interior Ministry had denied his visa request and he was promptly taken into custody.

But through his lawyer’s court intervention, Byle was released after eight days. He was then allowed under Turkish law to remain in the country, until the courts would instruct on this latest Interior Ministry ruling.

“I have trusted the government’s insistence that Turkey has religious freedom,” Byle told World Watch Monitor just before the Constitutional Court decision was issued. “It’s a legal right here.”

In contrast to most majority-Muslim countries, he noted, Turkey’s national laws allow its citizens to change their religious identity from Islam to Christianity or another faith.

“I have deeply felt God’s call to share the truths of the Bible in Turkey, and I’ve been committed to be transparent in all my religious activities,” he said. “I’ve been allowed to do this for all these years – not in a forceful manner, but openly sharing.

“But yes, I’ve faced a lot of intimidation here, pushing me to give in and not exercise this right. So it has been painful for the authorities to keep insisting that I am a threat to Turkey’s national security.”

In respect of the tightened security restrictions enforced since the failed coup-attempt, Byle said he had voluntarily restricted his street outreaches and literature distributions to avoid any possible public provocation.

Right after the bans against him were suspended this week, Byle left Turkey for a pre-planned business trip abroad. He confirmed to World Watch Monitor that he faced no difficulties with immigration procedures at Istanbul’s Sabiha Gökçen Airport.

“I rejoice in this latest ruling, and I take the court at their word – to hold the government accountable to uphold their own laws,” he said.

Byle and his German wife Ulrike have raised their five children, aged 11 to 18, in Turkey.