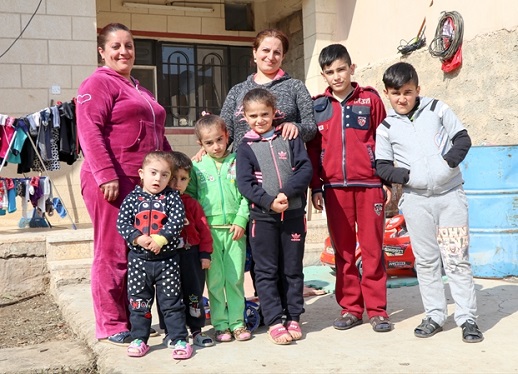 The families of Nidal (left) and Janan (centre) recently returned home to the Christian town of Telskuf.Open Doors International

As the offensive against IS in western Mosul drives civilians out of the jihadists’ last Iraqi stronghold, residents of towns already liberated are returning home with their expectations high – possibly too high.

The streets of one such town, Telskuf, now empty and quiet, shows signs of war. Some houses are riddled with bullet holes, others show little damage. IS fighters were expelled quickly from this Christian town, unlike the neighbouring town of Batnaya, which looks more like a warzone. Ninety per cent of its houses are reported to have been destroyed during the heavy fighting.

Nidal and Janan were two of the first people to return to Telskuf. The two sisters, with their husbands and six children, returned last month. The two men spend their days looking for work. Their house was ransacked but is liveable.

Since IS chased them out of the town in 2014 they had been living in the Kurdish town of Dohuk.

“We had water and electricity there, but it was not home. This place doesn’t have all that, but it is home,” says Nidal. She adds that she was getting depressed living as a displaced person: “Even when there was a birthday or a wedding, I wouldn’t join the party. It felt wrong to celebrate.”

“That kept us alive and hopeful, and helped us to wait for better times,” she says.

She points at her daughter playing a game on a phone in the corner of the room, saying: “And look, better times have come. Today I’m happier than ever. I’m home.”

IS demolished the infrastructure in the towns it occupied, so until the power lines and water pipes are repaired, returnees depend on generators and trucks delivering fresh water.

Many Christian families from the Nineveh Plains have migrated to Western countries since 2014. This was not an option for Nidal.

“La!” (the Arabic word for “no”) she says firmly. “We belong here. No way am I leaving this country. That is why we chose to return here as soon as we could – to show others it is possible, to set an example, and to motivate those who might be in doubt. By returning here we also give hope to our children, we show the new generation that they have a future in Iraq.”

Though Nidal is eager to stay in Telskuf, life is not easy.

“There is no school for the children,” she says. “My brother-in-law has to drive them to a town 15 minutes away every day. But the good news is that life goes on. Every day is new. We believe in Christ and He will help us through this period.”

On 18 Feb. the Chaldean Catholic Patriarch of Baghdad, Louis Sako, visited Telskuf to give his blessing to the large cross resurrected there, and to take part in the first mass for two-and-a-half years to be held in the town’s Saint George’s Church. He says of the service, it is “the first spark of light shining in the cities of the Nineveh Plain since the darkness of ISIS”.

Read more: The Cross, deemed illegal by IS, returns to Iraq’s Nineveh Plain 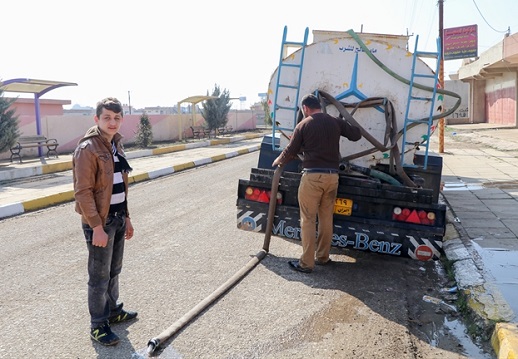 Islamic State fighters demolished the infrastructure in the towns it occupied, so until the power lines and water pipes are repaired, returnees depend on generators and trucks delivering fresh water.Open Doors International

The Patriarch adds that the cross announces to the world that “this is our land, we were born here and we will die here. Our ancestors were buried in this land and we are going to remain to preserve them with all our might for future generations. It is a sincere and great call to return and rebuild”.

However, not everyone wants to return to towns like Telskuf.

Father Gabriel is head of the monastery in the Christian town of Alqosh and works alongside families returning to their towns in the Nineveh Plains. He has lived and worked on the front line during IS occupation.

He is happy that many Christians are safe now and returning home, “but the truth,” he says, “is that many of them gave up hope”.

Speaking during a visit to nearby Batnaya, he says: “There were 750 Christian families living here when IS came. Four hundred of them already left the country. The rest will have huge problems returning here. Look around you, everything is destroyed.”

According to locals, Batnaya suffered more than any other during the intense fighting between IS and allied forces, when it was shelled and bombed for days.

Fr. Gabriel warns returnees not to expect things to return to normal now IS has gone.

“The liberation was just step one,” he says. “The next step should be the protection of Christians. We can’t do that ourselves; we need the help of the rest of the world. Like when Europe in the 20th Century needed the help of the world to cast out evil and to liberate and protect people – in the same way this region needs international protection now. IS may have been defeated; IS’s ideas are still very much alive.”

The priest hopes that, one day, the Nineveh Plain will be completely safe for Christians.

“We hope that the Church will be able to reunite its members worldwide,” he says, “and that we can bring back those who went abroad to be one body again here in Iraq.”

Read more: Alqosh, the last Christian town in Iraq, is here to stay