It was 2001 and Saad Hanna watched in horror as his TV showed the Twin Towers of New York’s World Trade Center smouldering and collapsing. Then a trainee priest studying in Italy, he said to fellow seminarians, “The world is turning upside down. The Americans will not let this be.”

With this flashback, the now-Bishop Hanna sets the scene for what he would endure five years later. In a first-person account, he vividly relates the 27 days of his kidnap and torture at the hands of Sunni armed men in a book, ‘Abducted in Iraq: a priest in Baghdad’.

It was 2006 and the tide of anger that followed the US-led dismantling of the government of President Saddam Hussein, and much of the country’s infrastructure, was fast-flowing and destructive. The young Baghdadi priest was driving home after a Mass and a big celebratory meal on the Feast of the Assumption, when four armed men ordered him from his car and pushed him onto the floor of theirs. He didn’t know them and believed they had the wrong man. Between beatings, his captors accused him of collaborating with the Americans.

In a dynamic that has become all too familiar to people concerned about Iraqi minorities, the priest found himself not only at the mercy of violent extremists, but also let down by members of the international community who could have rescued him. In a brief moment of contact with a world beyond his blindfold, he was handed a mobile phone, through which a member of the coalition forces told him: “We do not have orders to come and liberate people from kidnap.” 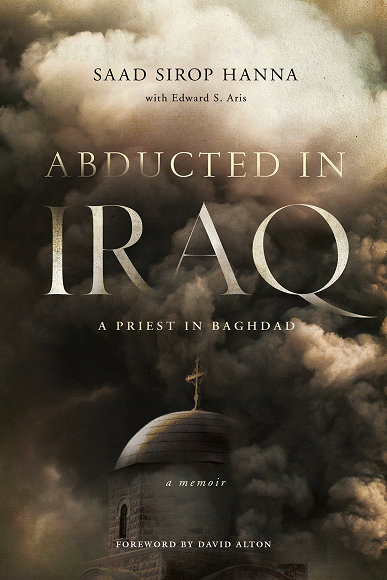 At another point, he was given a phone and told to talk to the Chaldean Patriarch, Emmanuel Delly, but a prisoner exchange promised by his captors didn’t materialise.

Unable to see his surroundings, Hanna invites the reader on his inner journey: of hopes raised and dashed; of holding on to his faith; to a Gethsemane-like acceptance of death; and into his near-obsession with “the malleability of time”, which preoccupies him when he is deprived of sight and freedom.

Bishop Hanna varies the pace well between the rapid, intrusive violence and long periods of isolation and reflection, in which his deep spirituality comes to the fore. His recollections are philosophical, elegantly expressed, and coloured not with bitterness but with incomprehension and an un-self-conscious courage. He humanises his captors as much as he can manage. “They too were concerned, these men, and wondered what would be next,” he says.

In his Foreword, British Catholic peer Lord David Alton invites readers to see Bishop Hanna’s story – of suffering a dual blow of extremist violence and Western inaction – as the story of all Iraqi Christians. To do this illustrates why so many Iraqi Christians believe their country is no longer safe and have sought refuge overseas, placing the future of Iraqi Christianity in question. Bishop Hanna was one of a number of clergy targeted around that time – and not all survived. Arguably, the lasting damage inflicted by Hanna’s captors was not the physical or psychological violence inflicted on the individual, but the convincing of thousands of Iraqi citizens to uproot and scatter themselves abroad.

The book ends with a reproduction of the telegram Pope Benedict XVI sent to Patriarch Delly which appeals for Hanna’s release, and a sentence listing his various roles now, inside and outside Iraq. It does not mention that the Catholic seminary where he worked relocated from Baghdad to Kurdistan because of his kidnap, or answer the questions left hanging while he was in captivity, or say at least that he still does not have answers, such as: Who were his captors? Why was he not released straight after his conversation with the Patriarch? What negotiations led to his eventual release?

For anyone exasperated by the ongoing violence in the Middle East, or wondering how best to respond to it, Bishop Hanna’s well-told account of his kidnap makes for a gripping and challenging read.

Abducted in Iraq: a priest in Baghdad