The Catholic Church in India has deplored a “fake” letter widely circulated in social and mainstream media alleging a Catholic conspiracy ahead of tomorrow’s elections in southern Karnataka state.

“This is totally unacceptable. This is a blatant attempt to spread lies,” Bishop Theodore Mascarenhas, secretary general of the Catholic Bishops’ Conference of India (CBCI), told World Watch Monitor today (11 May).

In press release earlier this week, the bishop said “the circulation of this letter just before the Karnataka elections is a disgraceful and mischievous ploy”.

What did the letter say?

The letter in question was in fact an email, purportedly from Cardinal Oswald Gracias of Mumbai, CBCI president, to Archbishop Bernard Moras of Bangalore, the capital of Karnataka and the country’s technology hub, known as the Silicon Valley of India.

The email inferred that the Catholic Church had taken the side of the ruling Congress party over a divisive issue involving a Hindu sect, in a seeming attempt to damage the prospects of the main opposition, the Hindu-nationalist BJP.

The Congress party government had recently recommended “minority” status be given to the Lingayat sect, which accounts for 17 per cent of the state’s 61 million population. Lingayats, traditionally known as BJP supporters, are now thought to be divided, with a section ready to support the Congress party. 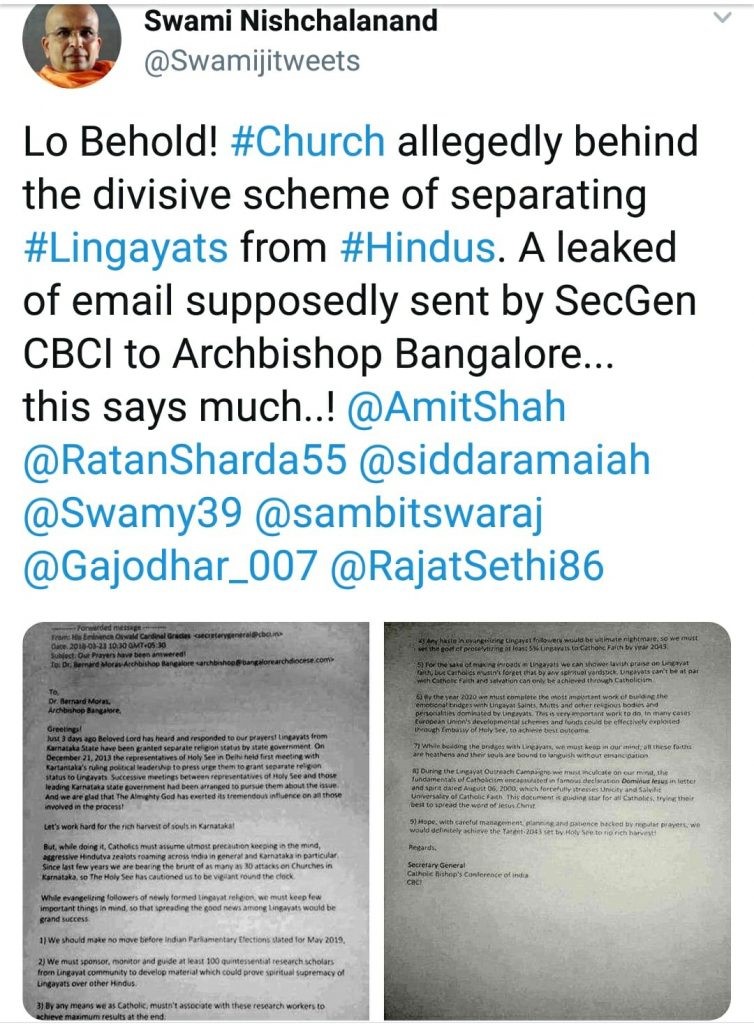 But the CBCI strongly denied any part in the letter, and warned it may take “legal action” against those behind it:

“The false letter makes wild allegations about the Church involvement in the Lingayat issue. In this regard we wish to state:

“We are concerned about the immediate and long-term effects of such propaganda on the minds of ordinary people,” said Bishop Mascarenhas.

“This is a highly planned political stunt by the BJP to counter the division of Lingayat votes,” Pericho Prabhu, spokesperson of the United Christian Forum for Human Rights in Karnataka, told World Watch Monitor from Bangalore.

“This is a desperate attempt by the BJP to blame the Church for its political troubles and try to garner Hindu votes.”

Prime Minister Narendra Modi has himself appeared at 21 rallies across Karnataka in recent days to boost the BJP’s stuttering campaign.

Prabhu said that another fake letter, along the same lines, was also being circulated in the state.

John Dayal, a Christian activist based in New Delhi, told World Watch Monitor “the insinuation of the Catholic conspiracy, going so far as to forge a letter implicating Cardinal Gracias, is part of the polarising of the nation on a Hindu versus others [basis]” and called it “a curtain raiser for the 2019 general elections”.

He said such tactics, alongside increasing attacks on Christians, “all project a worrisome scenario”.

Dayal referenced the graffiti recently scrawled on his former college, St. Stephen’s in New Delhi, which read: “A temple will be built here.” A cross at the college was also vandalised, with the words: “I am going to hell” and the Hindu Om symbol.

The National Students’ Union of India has called for an inquiry into the incident, saying the culprits “have tried to polarise the student community on the basis of religion and fake nationalism”.