Iraqis go the polls on Saturday (12 May) for the first time since the military defeat of Islamic State, whose campaign of terror against non-Muslims pushed thousands of the country’s last Christians to flee their homeland.

Only about 200,000 to 300,000 Christians are thought to remain in Iraq now, mostly in the Nineveh Plains and the semi-autonomous Kurdish region in the country’s north. Around 700,000 emigrated in the violent years that have followed the 2003 US-led invasion and the 2014 appearance of IS, and tens of thousands more have fled to Kurdistan. Politically weak, Christians will be hoping the election process helps rather than hinders the country’s slow progress towards peace. 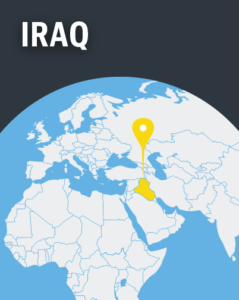 The vote is going ahead despite a plea from Sunni and Kurdish MPs to delay it to allow more time for people to return home. It has already been postponed from last September, when the military action against IS was ongoing. More than 2.3 million Iraqis, mainly Sunni Muslims but also tens of thousands of Christians, remain displaced. Many of the displaced Sunnis are in camps around the former IS strongholds of Mosul and the western Anbar region, and in Anbar the army is still sporadically attacked by IS jihadists.

However, a spokesman for the Iraqi Embassy in London told World Watch Monitor that displaced Iraqis would be able to vote as long as they had the required form of identification. “The High Electoral Commission in Iraq has provided all the necessary requirements for all Iraqis to vote with no exception,” he said, adding that displaced people who no longer have their biometric card, nor the electronic card used in previous years, still would be able to cast their vote if they could produce an official document with their name and photo attached to it.

Some 24 million Iraqis are eligible to take part in Saturday’s elections for the 329 seats of the Council of Representatives. Those elected then will determine the president and prime minister.

‘A nod to pluralism’

Under the country’s quota system, established in 2004-05 after the removal of Saddam Hussein by US-led forces, Christians are allocated five of those seats, and the other non-Muslim minorities a total of four. The Christians’ seats are in Baghdad, Mosul, Kirkuk, Duhok and Erbil.

Dr. Erica Hunter of London University’s School of Oriental and African Studies told World Watch Monitor the quota system was “one of the problems” for Christians.

“While they have a representation, they realise it is a tokenism to pluralism,” she said. “Clergy say, ‘We don’t have any say, and nothing really gets done,’ because the whole scenario is on the much larger demographic of the Shia and Sunni communities.” In the absence of greater decision-making power, Christians’ prime concern, she said, is “the security and stability and safety of their communities”.

The Patriarch of the Chaldean Catholic Church, Louis Sako, has repeatedly urged Chaldeans to take part in the vote. In a statement to be read in churches 6 May, he urged people to choose “those who can best serve them and their homeland”, and expressed a hope for the election to take place in a “sound, secure and fair manner, so as to come out with a strong national government representing all components.” In a previous statement he warned voters against backing “inexperienced and opportunist” candidates.

According to the political structure established post-2003, the role of Prime Minister is reserved for members of Iraq’s Shia majority. In his forthcoming term, whoever is elected will need to lead the country through major post-conflict reconstruction, rebuild relations with the Sunnis and reduce corruption in the oil-rich country. Prime Minister Haider Al-Abadi is standing for re-election, as is his divisive predecessor, Nouri Al-Maliki, both of whom come from the Islamic Dawa Party. Another frontrunner, Hadi Al-Amiri, is a militia leader who fought against Iraq during its war with Iran. A candidate popular with Christians is the former vice president Ayad Allawi, 74, a secular liberal, although he is seen as not powerful enough to win the top role.

“Whoever comes in will need to be a peacemaker,” Sir Terence Clark, a former British ambassador to Iraq, told World Watch Monitor. The election comes eight months after a Kurdish vote in favour of secession was rejected by Baghdad. “Somebody has got to sit down with the Kurds and sort out their grievances as part of a federal state”.

“Another major obstacle is to reconcile the grievances of the Sunnis,” he said. “Sadly, Al-Maliki seemed to aggravate the differences; Abadi has made some efforts but not enough. And whoever comes in next has got to do a lot more than has been done before.” Al-Abadi has reached out to Sunni voters and is prepared to work with Sunni politicians, while Reuters has reported that Al-Maliki is planning to reject the post-2003 power-sharing agreement that allots government roles to larger non-Shia communities.

Sir Terence said the sense of grievance among the Sunnis that led to the creation of ISIS had not been resolved. “If anything, it has been exacerbated, by the failure of the central government to respond quickly to the needs of the people in the Sunni areas, which were last to be liberated from ISIS’ control.” Therefore, he said, the threat of extremist violence has not gone away following what he called the “nominal” defeat of IS.

Christians, now being so few in number, know their political power is severely limited. In previous elections there has been one main Christian party, the Assyrian Democratic Movement, and Christians have backed it or sometimes nationalist secular parties. However this time there are as many as 12 Christian parties taking part in the elections – some Assyrian, some Chaldean; some candidates were closer to the Kurdish agenda and others to the Shia – weakening the Christian voice and re-opening denominational divisions. “The Christian vote is completely split now”, said Robert Ewan, an Iraqi-born journalist in London.

Another change in the demographic make-up of the country is the spread northwards of Shia Iraqis. Since government forces reclaimed the oil-rich city of Kirkuk from the Kurdish troops who had defended it from IS, members of Shia Hashd militias have begun moving into towns in the Nineveh Plains not far away. They have had little trouble in buying up properties from those Christians who have decided to emigrate.

According to the ecumenical Nineveh Reconstruction Committee, which aims to rebuild nine Christian towns and villages, some 37,000 of the more 100,000 Christians who fled their homes in the Nineveh Plains in 2014 for the Kurdish region have returned home. But Fr. Salar Kajo, who is part of the committee, said: “We have to rebuild now. If we take more time, families will leave and Christianity will disappear from Iraq.”

Sixteen-year-old Issac, a Syriac Catholic from Qaraqosh in the Nineveh Plains, spends his days cleaning and repairing the town’s damaged churches while his family awaits relocation. “Our house was completely burned; repairing it isn’t possible. I have no hobbies,” he told World Watch Monitor. “And I don’t go to school because our family decided to leave the country as soon as we can.”

Eighteen-year-old Yousif, also from Qaraqosh, said: “I don’t have many friends any more. Pretty much all of them left the country over the last few years. They are in Australia, the United States and France now.” But he told World Watch Monitor: “There is still fear among the Christians that there still could be attacks. But there is also courage among the Christians that chose to stay in this country.”

Christians have been scapegoated for too long to tolerate much more violence. With their political power limited by design and weakened by division, their best hope lies with a government that works to heal the grievances left by 15 years of bitter conflict and incorporates all the country’s religious and ethnic groups. Only with the establishment of a lasting peace and a citizenship that moves beyond religious favouritism will Christians be persuaded to return home, and, if they have already, to stay.