Five Christian youths were recently sentenced to death by hanging for killing a Fulani herder, himself alleged to have killed 48 people. The five are from Adamawa state in north-east Nigeria, one of the three states most severely hit by the Boko Haram insurgency. Many fled Boko Haram, only to be targeted again, this time by mainly Muslim Fulani herders, responsible for more violence than Boko Haram over the past three years. Dr. Atta Barkindo*, who has researched the area widely, analyses some of the root causes behind the inter-ethnic, inter-religious conflict.

1) Breakdown of rule of law and order

So, for example, when Fulani herdsmen attacked Dong, Adamawa (in December 2017), a Nigerian Air Force helicopter belatedly bombed the entire village. Locals said 86 people were killed during the attack, and those involved in burying the victims said that 51 had gunshot or machete wounds. Definite figures are hard to give, as many villagers fled into the bush.

Young people in that area realised that the government, far from defending them, could even exacerbate the situation. As a result, they realised they would have to defend themselves and their communities. The five men convicted are seen as belonging to one of these militia groups.

The failure of the rule of law, and lack of trust in the security services (police and military), has led to the emergence of ethnic militia groups keen to defend their families and communities. That verdict shows that the government is keen to demonstrate that people are being held accountable for crimes committed. It is also intended to ensure that this verdict will deter future perpetrators, and, above all, show that the government is not willing to allow ethnic militia groups to undermine the role of the security services, whose constitutional responsibility it is to protect lives and properties.

The historical context of the farmer–herders conflict is marked by political domination of members of one religious group over the others. Following the establishment of the Sokoto caliphate in 1804 and the consolidation of Islamic rule in Adamawa province, Numan Federation (about 30 miles from the state capital Yola) has remained the only territory that is not completely under Islamic rule. Its population remains predominantly Christian, but over the years there has been massive internal migration and the settlement of Hausa-Fulani Muslims in Numan; the migrants increasingly appear to dominate the political and economic sectors of the area. Now there are agitations for the creation of an Islamic emirate out of the territory, presided over by Hama Bachama (the current chief of Numan). 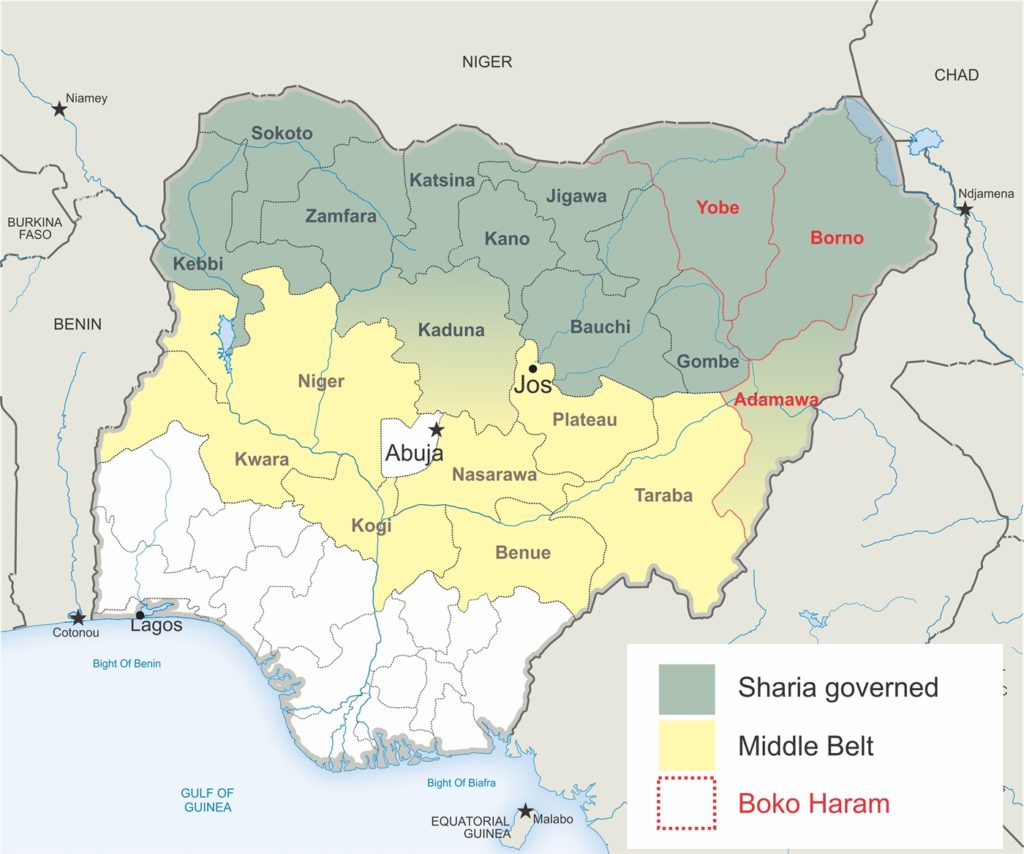 Recent killings, and the sentencing of these five young men, is an effort to intimidate a predominantly Christian population into submission. Again, the verdict should also be interpreted beyond the classic conflict between farmers and herdsmen over access to natural resources. This is because some regions, particularly the Local Government Areas of Ganye, Toungo and the border areas that stretch into Cameroon, have a vast spread of environmental resources that could feed millions of cattle.

Yet, the Fulani herders have mostly refused to move to those areas, although some have.

Why is Numan of paramount interest to the mainly Muslim Hausa-Fulani?

Numan is the major area of Christianity in Adamawa state, and the major voice of opposition – politically and religiously – against predominantly Muslim Hausa-Fulani domination in the state. Lawyers from Numan, for instance, are the leading voices against keeping the state’s name Adamawa (“sons and daughters of Adamawa” – a Fulani ruler who conquered and ruled over the indigenous tribes). They have called for a return to the name Gongola state (named after Gongola River). Consequently, the threats, the intimidation and the drive to marginalise Numan is an agenda to silence the only voice of opposition in the state.

Additionally, the verdict against the five men should be understood in the context of the wider persecution of Christians in the Middle Belt region and beyond; it says a lot about the justice system in Nigeria. It is dominated by a particular religious group – non-Christians who are already tilted towards the support and implementation of a particular religious agenda. The system is designed to punish, exclude and marginalise Christians into submission.

Again, the traditional, military and security hierarchies are controlled by non-Christians. In Adamawa state, for instance, all traditional institutions (except places such as the Numan Federation) are controlled by Muslims, and there is an unwritten rule (which does not exist in the Nigerian constitution) that traditional chiefs in some areas must be Muslims.

This conflict is further exacerbated by the continuous migration and settlement of Hausa-Fulani Muslims within the Numan Federation and other territories. The uncontrolled migration, political domination and suppression exhibited by the Hausa-Fulani against indigenous tribes that are predominantly Christian has increased the level of tension and conflict.

The intention of the elite is to send a strong message to other communities that Islam appears to be here to stay, and there is little point in resistance.

The efforts of the Muslim elite to use political power to dominate, control and suppress Christian-majority territories is not new in northern Nigeria. For instance, in the central state of Benue, before the implementation of the anti-grazing law in November 2017, there was an announcement in newspapers, on TV, and across other media outlets asking people to attend the public hearing of the bill. Fulani representatives, however, refused participate in it. But when the bill was passed, the Miyetti Allah Cattle Breeders’ Association of Nigeria (MACBAN) publicly declared that the state would remain ungovernable if the law was implemented.

The strategy of the mainly Muslim Hausa-Fulani always appears to follow the same pattern: migration, settlement, occupation and control through forceful conversion, abduction, deception and early marriage and then the demand for an independent chiefdom.

Recently, Governor Nasir El-Rufai of Kaduna state announced that three chiefdoms in a predominantly Christian area of southern Kaduna – Kauru, Kagarko, Kajuru and Lere Chiefdoms – will all be renamed emirates, bringing them under an Islamic principal. This was staunchly rejected by the Southern Kaduna Peoples’ Union (SOKAPU).

The demand for a separate chiefdom is also seen in Jos, Plateau state, where this week almost 100 people died in ethnic and religious violence. Even some southern Nigerian states such as Ekiti, Ondo and Enugu have already faced the herdsmen’s attacks.

As the country moves towards elections in 2019, there are fears that President Muhammadu Buhari may use the ongoing violence as an excuse to cancel the process and remain in power.

Dr. Atta Barkindo, Director at the Kukah Centre, has written extensively on violence in central and NE Nigeria. In 2016, World Watch Monitor published his detailed report on Fulani violence in the Middle Belt, and in 2014, at the time of the Chibok girls’ kidnap, his report on Boko Haram violence against women and girls since 1999.