A sultan traditionally holds spiritual authority over his subjects, as well as a leadership role.

It’s nearly two years after the decision was first announced, because of disagreements over the need for a sultan over the supreme chief, the traditional leader in the area – whose position is inherited. Also, the candidate was not believed to be of a royal bloodline, and thus not regarded as eligible. 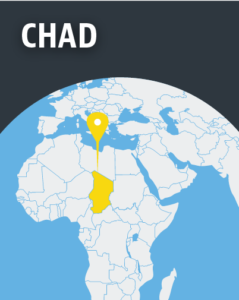 However, in June, during an inauguration ceremony of the new governor, in the regional capital of Sarh, the third town in the central African nation, the Minister of Territorial Administration, Ahmat Mahamat Bachir, installed Mahamat Moussa Bezo as Sultan.

“After the governor had been installed, people started moving out, thinking the ceremony was over. But to their great surprise, the MC called them back because there was another ceremony,” a local source, who wanted to stay anonymous, told World Watch Monitor.

However, both the Prefect and his Deputy refused to do the ceremony, so the Minister suspended them and the General Secretary, third in line, carried it out.

‘The protector of our habits and customs’

The decision caused strong reaction, especially among the Christians in the area. “They did it on a Sunday, knowing full-well that Christians would be in church (and so miss this development). And even among those present no one was aware that the minister had such an agenda,” said a local church leader who also did not want to be named.

The Minister of Territorial Administration denied that the appointment was illegal. “It is not at all normal that (such) a decree cannot be applied,” he said, according to Radio France International. Any disagreement could be challenged through legal means, he said, adding that the government would not allow anarchical behavior.

Until the installation of the sultan, the traditional head of a canton was the highest authority in Moyen-Chari.

“In a region with a large Christian and Animist population, we can’t have a chieftaincy using the terminology of a sultanate. It is a threat to the way we live together,” the MP for Sarh, Nobo Ndjibo, told RFI. “Can the sultan really be the protector of our habits and customs?” he asked, adding that the President had been misled in signing the decree confirming the appointment. “We don’t want the implementation to become a threat for peace,” he said.

A few months ago a number of local MPs, both from the opposition and ruling party, wrote to the president about the threat posed by the appointment.

Chad is a majority-Muslim country but with a significant Christian population (35%).

Following the appointment, Christians and Animists in the southern region will be governed by a Muslim governor and a sultan. “Many Christians fear that the sultan will use his position to drive the Islamic agenda in Moyen-Chari and the entire south…Islam has been growing in the Moyen-Chari region,” the church leader said.

“For instance, about 25km before Sarh there is the Mabourka Islamic Centre in Manda village, said to host about 11,000 mostly former Animists and Christians. It’s understood that a local was taken to Mecca for training and on his return has worked to Islamise the south. Today, smaller versions of this training site have sprung up across the area (in places like Kumogo, Maro, Kyabe and others),” he added.

Islamist influence on the African continent has increased in recent decades, according to a report by the international Christian charity Open Doors. It observes how Islamic NGOs that have been, or still are, funded by countries such as Saudi Arabia, Qatar and Iran, have in the last 20 years expanded madrassas and Islamic schools that teach radical views.

The effect of this is increasing intolerance towards Christians, seen on the charity’s 2018 World Watch List where, compared to 2017, several sub-Saharan African countries have moved up nearer the top 50.