Current Gambian President Adama Barrow at a polling station in 2017 during legislative elections.

The Gambia, a tiny nation on Africa’s North Atlantic coast, is considering a new constitution. Prominent Christian voices in the country say there is a lot to like in the draft, and one big thing to worry about: It does not explicitly define majority-Muslim Gambia as a secular state.

A committee of the National Assembly released a draft constitution on 15 November, and the public is submitting comments ahead of a national ratification vote. 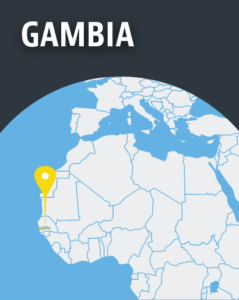 The draft guarantees press freedom and access to public information. It limits presidential terms, which would preclude a repeat of the 22-year rule of former President Yahya Jammeh, who led a military coup in 1994 and ran an increasingly authoritarian government until he was voted out in 2016.

The proposed document also contains “entrenched clauses that state that no one can declare The Gambia a religious country,” said Pierre Gomez, director of research and policy planning for Gambia’s Social Security and Housing Finance Corporation. But, he said in a 4 Dec. column online, it needs to go further: It should affirmatively declare The Gambia to be secular; forbid public officials to promote any faith; and forbid religious discrimination in access to government resources.

“It would have been better and safer to maintain secularism as a reminder to would-be troublemakers,” Gomez wrote.

Troublemakers such as the former president.

“We need to remember that three years back, someone stood here and declared the country as an Islamic State, thus it was an issue that affected us the Christians,” Pastor Seal S. Jammeh, representing the Christian Council of Gambia, told Constitutional Review Council on 3 Dec. “We’re urging you to look into the issue critically.”

Before he was voted out, then-President Jammeh declared The Gambia to be an Islamic Republic, saying it was necessary to break the country from its “colonial legacy.” The country gained its independence from the United Kingdom in 1965.

Nine of every 10 Gambians is Muslim; most of the rest are Christian. The current constitution, which dates to 1997, permits Islamic law to apply to marriage, divorce and political affairs, and created an enabling environment for a subsidiary court system to administer it. The draft constitution elevates those courts to full Sharia courts, and establishes a Sharia High Court and Supreme Court — a structure found in officially Islamic states such as Pakistan.

“What the Christian Council is asking to be included in the final constitution,” Jammeh told the review council, “is for The Gambia to be a sovereign, secular republic with diverse ethno-linguistic and religious freedom communities with equal opportunities and ensuring inter-ethnic, political and religious freedom for social cohesion.”

Gomez told World Watch Monitor that the rights of Christians, particularly converts from Islam, would be vulnerable to abuse unless the constitution declares The Gambia to be officially secular.

“What we are saying is to take out religion from the offices,” he said. “We are asking for the neutrality and separation of the state and religion.”